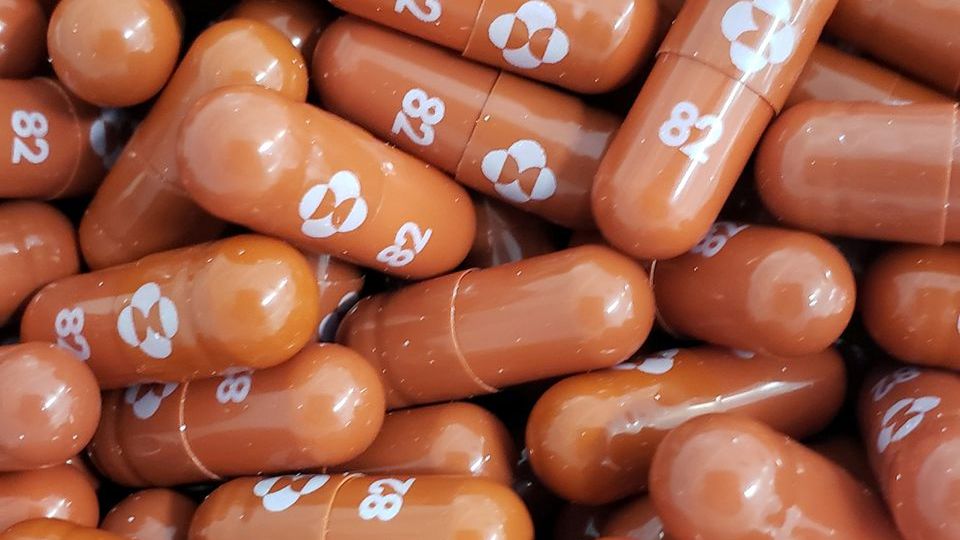 Molnupiravir is one of the new COVID drugs purchased by Australia. Photo: AAP

As Australia’s vaccination rates continue to soar, the federal government is buying up COVID-19 treatments amid warnings that case numbers will spike to new highs as lockdowns end and borders reopen.

Two new drugs – intravenous treatment Ronapreve, and a tablet from Pfizer – are set to bolster Australia’s fight against the virus by combatting symptoms in the unvaccinated and vaccinated alike.

“Whilst vaccination remains the best protection against COVID-19, our government continues work to ensure that Australians have early access to safe and effective treatments as they are made available,” Health Minister Greg Hunt said on Sunday.

All of Australia’s approved vaccines have powerful benefits in fighting infection, serious illness and death from COVID-19.

But a small number of vaccinated people – particularly those with underlying health conditions – are still ending up in hospital amid virus outbreaks in Sydney, Melbourne and Canberra.

Public health experts have also raised concerns about people who refuse or are unable to get vaccinated, as well as young children under 12 for whom a vaccine is not yet approved.

As of Sunday, 67.8 per cent of Australians aged over 16 had received two doses of COVID vaccine.

That number was 80.3 per cent in New South Wales, 79.8 in the Australian Capital Territory, and 66 per cent in Victoria.

But despite the soaring vaccination rates – Mr Hunt praised NSW as “one of the most highly vaccinated societies in the world” – case numbers are expected to spike upon further reopening.

Other modelling from Burnet and the Doherty Institute showed cases would shoot up nationwide when other states progress along the reopening roadmap.

Mr Hunt has in recent weeks announced deals for several new COVID treatments, which he said would be about “managing COVID-19 outbreaks” once states ease their public health measures after progressing through the national plan for reopening.

The Health Minister said the four treatments “complement vaccination but do not replace vaccination”, and urged Australians to still get the jab.

It is still undergoing clinical testing, and awaiting approval from the Therapeutic Goods Administration, but early trials showed it could reduce risk of hospitalisation and death in COVID patients by up to 70 per cent.

It is expected to be targeted for use in unvaccinated people who are at risk of developing severe disease, Mr Hunt said.

A combination of two monoclonal antibodies known as casirivimab and imdevimab, Ronapreve would be given intravenously.

“It is designed to block infectivity of the SARS-CoV-2 virus, which causes COVID-19,” Mr Hunt said.

Pending final approvals, it will be available for use next year.

The first doses will arrive in Australia by the end of October.

At the same Sunday press conference, Mr Hunt also confirmed the purchase of 500,000 courses of a new anti-viral drug from Pfizer.

Again, the drug is undergoing further clinical trials and awaiting TGA approval, but is expected to reduce the severity of a COVID infection.

Mr Hunt said the drug would likely be given soon after infection, or following an exposure to the virus.

“This oral antiviral treatment is taken every 12 hours for five days and is designed to block an enzyme the virus needs in order to multiply early in its lifecycle,” Mr Hunt said.

Earlier this month, following what Mr Hunt called “very promising results” from early hospital use, the government bumped up the order to 31,000 units.

The minister said it was “making a significant difference to the health of patients … keeping vulnerable patients out of hospital and keeping them out of ICU”.

The treatment, given in hospital, helps the body mount a stronger immune response to COVID infection.

It is meant to reduce hospitalisations and deaths, especially in older people or those in high-risk categories.

Earlier this month, Australia bought 300,000 doses of Molnupiravir, an oral pill to battle mild and moderate cases of COVID.

Still in late-stage trials, the pill – from pharmacology giant Merck – has been shown to lessen symptoms and decrease chances of hospitalisation or death.

It, too, is awaiting TGA approval, but could be rolled out from early 2022.

Early trials have shown Molnupiravir can reduce hospitalisation and death by 50 per cent.

A capsule to be taken twice a day for five days, it has been flagged by the government as having potential use in high-risk and rural areas.