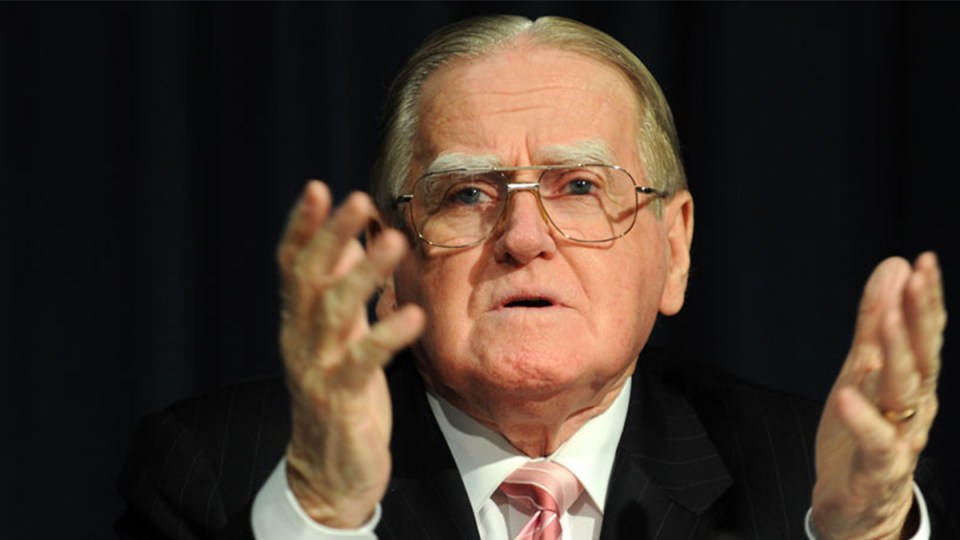 Christian Democratic Party founder and 40-year veteran of the NSW parliament, Fred Nile, will retire from politics in November.

Reverend Nile will likely be succeeded by Lyle Shelton, the former head of the Australian Christian Lobby who is best known for his vigorous opposition to marriage equality and support of Christian rugby player Israel Folau.

Mr Nile, 86, announced his retirement on Sunday night, saying it had been the “privilege of [his] life to represent Christ’s values in the parliament on behalf of the citizens of this great state”.

But Mr Shelton still needs to get the party’s state council to endorse him to take Mr Nile’s vacated upper house seat.

“The need for unashamedly Christian voices in public life has only increased in recent years and I can think of no one better than Mr Shelton to carry this forward,” Mr Nile said.

Mr Shelton said he was honoured that Mr Nile and the CDP state board had recommended he lead the party into the future.

“I looked forward to seeking the support of the party’s state council,” Mr Shelton said.

“There has never been a greater need for Christian ethics and principles in our parliaments.”

“Letting a politically irrelevant blow-in fill your vacated shoes is a sad legacy to leave after 40 years in parliament,” Mr Greenwich said.

“NSW and our parliament values and celebrates the LGBTI community. Lyle Shelton will feel completely out of place.”

Greens MLC Abigail Boyd tweeted the news that Mr Shelton would likely be her parliamentary colleague with the comment: “Just when we thought the NSW parliament couldn’t get any worse.”

Mr Nile was first elected to the NSW Legislative Council in 1981 and has long been the face of the Christian right in the state, promoting traditional family values alongside his wife Elaine, who died in 2001.

He opposed homosexuality and for years prayed for rain on the night of Sydney’s annual Gay and Lesbian Mardi Gras.

In 2011, he criticised federal Labor’s Senator Penny Wong for announcing her partner was pregnant, accusing her of “promot(ing) their lesbian lifestyle and trying to make it natural where it’s unnatural”.

His retirement announcement lauds him as a “constant champion” for the “natural family”, “human rights for the unborn”, religious freedom, the dignity of women, measures to combat binge drinking, drug rehabilitation services, and gambling advertising reform.

Mr Nile, who remarried in 2013, has promised to remain active in the CDP.

Mr Shelton was one of the lead campaigners for the “no” vote in the 2017 marriage equality plebiscite.

This is not his first foray into party politics. He ran for federal parliament as a Queensland candidate with Cory Bernardi’s Australian Conservatives party in 2019.

More recently, he worked as an electorate officer with the Queensland LNP in Oodgeroo.

Mr Shelton’s website describes him as a “keen participant in Australia’s culture wars”.

His new role is expected to be formalised by mid-year.