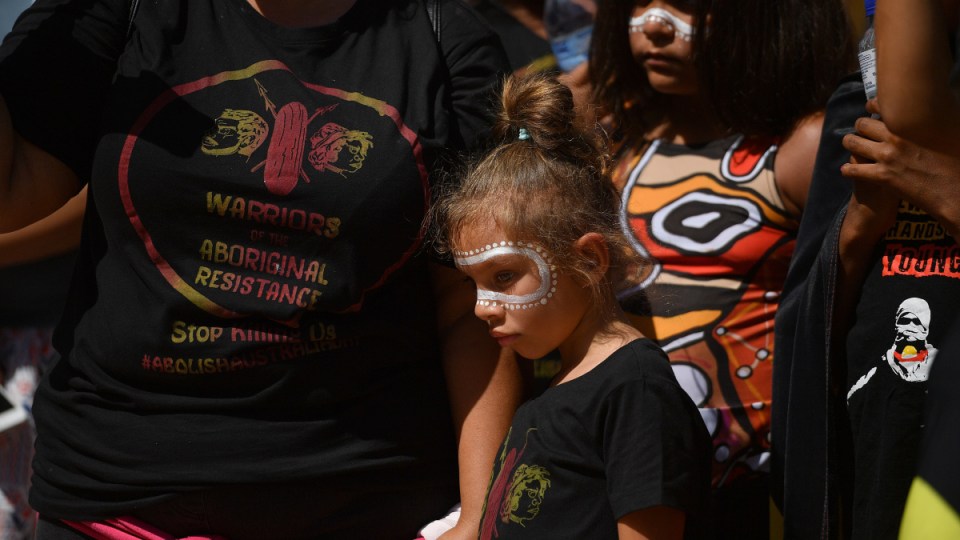 A family participating in an 'Invasion Day' rally in 2019. Photo: Getty

A Melbourne “Invasion Day” rally is poised to draw thousands despite the city’s annual Australia Day parade being cancelled because of COVID-19 concerns.

The traditional parade was scrapped in December, with no mass gatherings allowed under Victoria’s coronavirus restrictions.

But a number of events will go ahead on Tuesday with COVID-safe plans including a Victorian NAIDOC-led Day of Mourning Dawn Service and “Invasion Day” march in the CBD.

Thousands are expected to gather on the steps of the Victorian parliament for the rally from 10.30am.

“There is nothing to celebrate on Australia Day,” WAR said in a statement on Monday.

“Aboriginal communities continue to be oppressed, policed, discriminated against and disenfranchised.

“Australian nationalism – a project reinforced by the Howard years yet continued by governments since – is nothing more than white supremacy, ignorance and racism.”

More than 3000 people have signalled their attendance for the event on social media and have been told to organise in groups of 100 and stay 10 metres apart, wear masks and bring hand sanitiser.

Marshals will be patrolling to ensure protesters adhere to COVID-safe protocols, WAR said.

“There will be increased police presence out there on the streets, but don’t blow the freedoms that we’ve got right here and now,” she said on Monday.

The health department echoed Ms Horne’s advice, telling Victorians to remain “sensible” on Australia Day and not let their guard down.

The group plans to meet at Queen Victoria Gardens and march from Park Pavilion to Catani Gardens near St Kilda Beach.

The “People’s Australia Day Parade” will finish with a “beach party” to “celebrate what’s great”.

Victoria Police said it was aware of several planned demonstrations in the CBD and issued a stern warning to would-be troublemakers.

“Anyone looking to attend an event to cause trouble can expect a firm response from police; you will be arrested and held to account if you commit a crime,” it said in a statement to AAP.

He will be joined by Victoria’s Governor Linda Dessau, who will later host a citizenship ceremony at Government House for 50 conferees from nations including Iraq, Fiji, Hungary, Vietnam, Pakistan and Colombia.