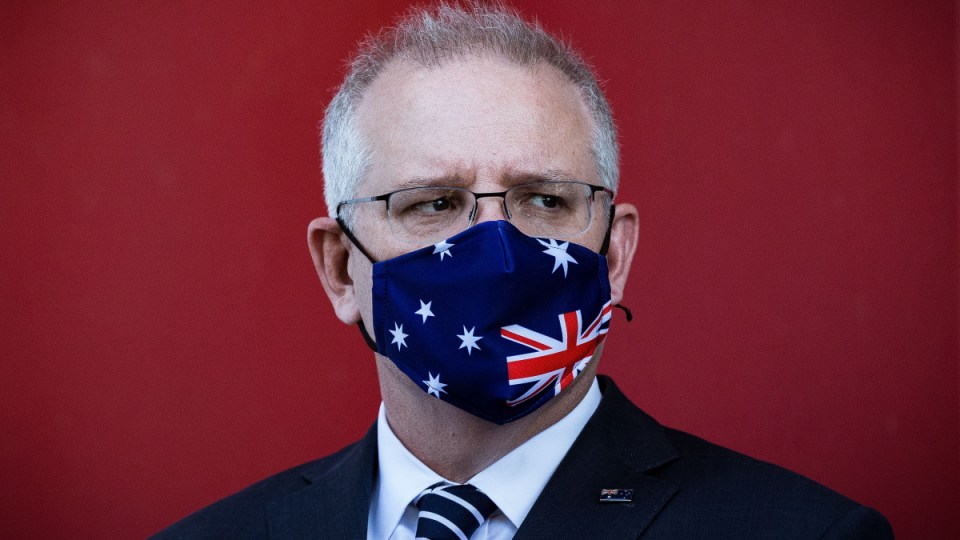 It’s not often you get to see a prime minister’s feet.

But there they were, splashed full-page in the Sunday Telegraph last weekend, a jacketed Scott Morrison standing in blue board shorts and white thongs, gazing at his phone.

‘ScoMo into iso’, the headline screamed, with News Corp having “obtained exclusive pictures in lockdown” of the PM quarantining after returning from Japan. There he was, in obligatory Cronulla Sharks NRL kit, puffing away on the exercise bike; and there he was, wearing a T-shirt behind a desk (a footy on the mantelpiece), “hard at work at The Lodge” according to the photo caption.

The same photoshoot, from his official photographer, popped up on the PM’s Facebook a few hours later, racking up a cool 30,000 likes.

But as a raging online debate ignited on the release of the photos, in a co-ordinated print and digital rollout, it wasn’t hard to place Mr Morrison’s boardies shoot as the latest instalment in the PM’s ‘suburban everyman’ series; a deliberate ongoing marketing exercise rebranding the Operation Sovereign Borders hardman immigration minister, the bean-counting treasurer, the beneficiary of Malcolm Turnbull’s downfall, as simply ‘ScoMo’, the beer-drinking, footy-loving, daggy dad who just happens to be Prime Minister.

The answer to the question that literally NO ONE has been asking ‘I wonder how Scott Morrison is going in quarantine…?’ pic.twitter.com/FmfXwQMOp0

It’s a campaign that, like it or not, is absolutely working.

“There’s a perception among politicians that this is who you have to be now,” Professor Ariadne Vromen, a political sociologist at the Australian National University, told The New Daily.

“You have to be everything – a man of the people, and a good policymaker. They’re using these images to get people to trust him.”

Mr Morrison is, of course, not the first politician to embark on an image makeover.

But many say Mr Morrison, a marketing man by trade, has honed it to a fine art.

Mr Morrison’s near-weekly Facebook posts about Bunnings and home DIY projects became a minor source of mirth in political circles in recent months, timed as they were to be published on weekend mornings as other suburban dads would be on their own pilgrimages to the hardware giant.

They were a subject of Parliament House jokes, but the Facebook analytics show they resonated with ordinary voters. Photos of Mr Morrison building a cubby house with his daughter got 36,000 likes; his efforts putting together a chicken coop got 39,000; and a snap of him grinning as he held an inflatable Santa riding a shark from Bunnings, with wife Jenny rolling her eyes, got 38,000 likes.

Most of Mr Morrison’s other content, from videos of press conferences to announcements of new policy, can get as few as 2000 likes up to 10,000. His home handyman shtick gave the PM some of his biggest social media wins of 2020.

It’s also far from the only gimmick he’s tried. The rhetorical “how good is…?” has been a solid feature of his lexicon, to denote praise for everything from his wife, to Ash Barty winning the French Open, to Kylie Moore-Gilbert’s release from Iranian prison. There’s the obligatory baseball caps branded with whichever business he’s visiting, accompanied by a double thumbs-up for the cameras.

While Howard and Hawke didn’t have to win over social media, it’s now an indispensible part of the political process. Feeding the public a steady supply of relatable posts is a constant battle for the teams of PR and media people employed by high-ranking politicians.

“Most politicians’ content on social media is boring crap nobody cares about. If you put out interesting pictures with good content, it will get views,” said Mr Story, who left politics several years ago and now works in the private sector.

“You can criticise all you like, but it does work.”

But it’s about more than just doing numbers on Facebook, experts say.

“Politicians can get into trouble over being asked how much is a loaf of bread, this idea of not being connected to the community,” Dr Zareh Ghazarian, lecturer in politics at Monash University, told TND.

“That’s why we see politicians wearing the Akubra or rolling up their sleeves for photos, but Morrison wears the baseball cap. There are carefully crafted messages in these images. He and the party machinery are trying to position him as an ordinary member of the community, who just happens to be PM.”

“I think he’s using these images to divert from his overt religiosity, and how important it is in his life,” she said, referencing the famous photos of the PM worshipping at his Pentecostal church during the 2019 election.

“Few Aussies are churchgoers. We’re not America, you don’t need to do that stuff in Australia to get elected. If anything, it can work against you. I think a lot of what he does is to work away from that.”

Professor Vromen said some Australians may be slightly unnerved by political leaders being devoutly religious, believing this is a trait Mr Morrison wouldn’t mind publicly glossing over.

“He did those photos once, but he hasn’t done them again,” she noted.

Professor Vromen and Dr Ghazarian both noted Mr Morrison’s image-construction as an “ordinary Aussie bloke” also built a stark contrast to predecessor Mr Turnbull – a well-to-do banker and lawyer rarely seen out of a fine suit. He was, in turn, initially seen as a sharp and welcome divergence from the rough-and-tumble boxer in budgie smugglers Tony Abbott, but the Member for Wentworth was quickly painted as out of touch.

He could never quite shake the stinging ‘Mr Harbourside Mansion’ tag from conservative commentators.

“The stuff Morrison is doing is very deliberate, putting him on a different dimension to Turnbull. I don’t think there would be a photo of Turnbull wearing thongs,” Dr Ghazarian said.

It’s a simple message. Through the week he’s Mr Busy; announcing things, pointing at things, rolling up his sleeves or donning hi-viz, or slapping on a baseball cap to ‘have a go’ at whatever photo op his office has lined up.

On the weekends, he’s Mr Ordinary; making his wife roll her eyes at another dad joke, cooking up a curry, watching the footy, heading to Bunnings for another handyman project.

Mr Story said the PM’s office would be aware of journalists and politicos sniggering about the folksy image they’re constructing – but they likely wouldn’t care, as long as it does the job.

“It doesn’t matter what politicians and media think about it. It’s about what the average person thinks when it surfaces in their social feed,” he said.

“But you have to respect the audience and their judgement too. If audiences see if you are trying too hard, they will smash you up… [Mr Baird] had many successes with content, but when we over-reached, the audience didn’t leave us in any doubt about it.”

Some missteps, like saying his family would name the chickens after the wives of former Prime Ministers, could be put in this category.

Some were upset images taken by the PM’s official photographer were run in a major newspaper. The Guardian ran a story featuring concerns from Parliament House photographers, and #Auspol diehards maligned it as “propaganda”.

Mr Story said “of course” it’s propaganda – but added that was not unusual.

“Just as crafting a speech is. But the suggestion that in-house content is biased and newspaper photos are pure is a naive one,” he said.

He also pointed out Abbott, Turnbull and Labor leaders Kevin Rudd, Bill Shorten and Anthony Albanese have been keenly aware of their own images, shoehorning their own crafted personas into the mainstream media and online feeds.

But Mr Story said another leader might be even more mindful of, and better at crafting, his own story.

“I think Dan Andrews is more social media focused than ScoMo. His media releases are written in that style of ‘I’m your next door neighbour at the BBQ,’ so it’s not a photo but it’s a form of image cultivation,” he said.

“But Morrison does it more, and better, than other PMs.”