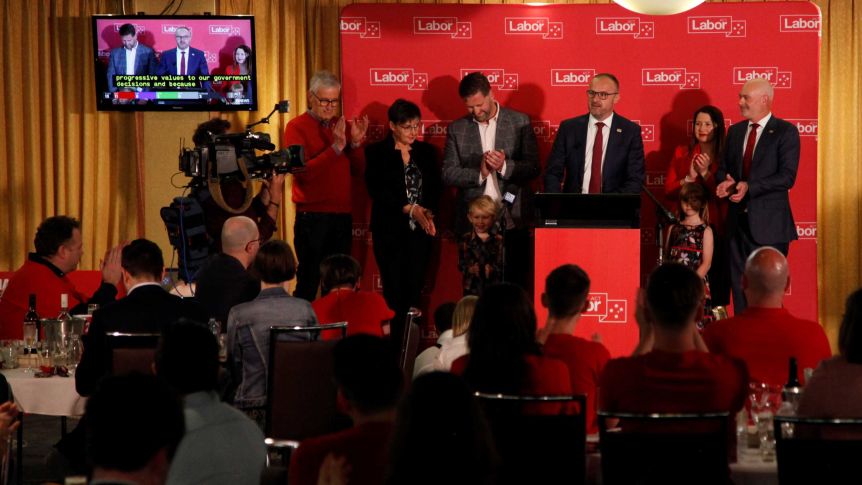 There was no long, drawn out wait for results as votes were tallied yesterday for the 2020 ACT election.

With more than 70 per cent of Canberrans voting before the official polling day, and most of those done electronically, the count was almost instant.

The numbers quickly showed Labor was likely to be returned to Government with the help of the Greens, and the Canberra Liberals faced a reduced parliamentary presence.

With just under 80 per cent of all votes counted at the end of Saturday night, here is what you need to know about the election, and the territory’s 10th ACT Legislative Assembly.

1. Labor maintains its dominance in Canberra

Andrew Barr will again be Chief Minister as he leads his party into 20 years of Labor Government in the ACT.

But the party will again need the support of the Greens to form government, with no outright majority won with 80 per cent of the votes counted.

Labor looks likely to re-enter the Assembly with the same number of seats it had last term, after experiencing an almost static 0.1 per cent swing against them.

The difference this time is what Mr Barr is calling the party’s “southern resurgence”, as it enjoyed an almost 8 per cent swing towards it in the electorate of Brindabella – largely centred around Tuggeranong.

The party says that result is a vote of confidence in its plans to expand light rail to the south.

2. The Greens are about to have a much bigger seat at the table

Saturday night’s results left three seats undecided – and ABC election analyst Antony Green says the Greens have a chance to pick up all of them.

The party enjoyed a 3.6 per cent swing towards it, with four-fifths of votes counted.

The ACT Greens have won a predicted three seats, meaning they could have as many as six seats in the 25-member Assembly.

Leader Shane Rattenbury has been returned, and the Greens have retained their seat in Murrumbidgee, with new member Emma Davidson replacing retiring MLA Caroline Le Couteur.

Andrew Braddock in Yerrabi, the electorate covering Gungahlin, has also likely picked up a seat.

Already a major presence in the assembly, with Mr Rattenbury being a cabinet member within government, the ACT Greens will no doubt push to expand their influence if they win more seats.

3. Coe’s leadership is in question – but it’s not over yet

Canberra Liberals leader Alistair Coe’s gambit to run an election campaign focused on cost of living, in particular ongoing rates rises in the ACT, seems not to have paid off.

The Liberals look set to return to the Assembly with no more than 10 seats – at least one fewer than they held going into the election.

The party was at a disadvantage to get noticed earlier in the year as multiple crises threatened the ACT and dominated local news.

As disappointed Liberal MLAs watched the results roll in last night, they reflected on what could have been done better – but they all said they felt Mr Coe had run a good campaign.

The Liberal leader did not indicate whether or not he would step down following the loss, nor did his colleagues immediately suggest his tenure as party leader was over.

At just 36 years of age, there is a strong sentiment within the party that Mr Coe has a long career ahead of him yet.

But with a recurring criticism of Mr Coe being his conservatism leaving him out of step with the Canberra electorate, his colleagues will be asking if he is the right man to lead.

4. Both sides will lose familiar faces

At Saturday evening’s count, there were Liberal and Labor MLAs preparing for unhappy news.

The 3 per cent swing against the Liberals had naturally resulted in lost members.

Andrew Wall in Brindabella and James Milligan in Yerrabi are both expected to lose their seats, and if Candice Burch survives in her electorate of Kurrajong, it will be by the skin of her teeth.

Though Labor did not lose the Murrumbidgee seat, it is preparing to farewell Murrumbidgee MLA Bec Cody, as preferences indicate Labor candidate Marisa Paterson will take her spot instead.

It is a twist that comes thanks of one of the ACT’s electoral quirks: voters cannot just vote for a party and let it determine preference flows, so no candidate has an inherent advantage.

And Deepak Raj-Gupta, who served only briefly after being elected on a countback following Meegan Fitzharris’s resignation last year, appears to have lost his seat to the Greens.

Two more MLAs, Liberal member Vicki Dunne and Greens member Caroline Le Couteur will also be gone from the assembly, with both retiring from politics.

5. Independents hopeful for an upset haven’t got their result

A rebel group branded the Belco Party, who hoped to win votes on the promise of furthering issues in the Belconnen area, seem unlikely to make the cut.

Led by former Canberra Liberal MLA and one-time party leader Bill Stefaniak, and joined by high-profile founder of the Summernats car festival Chic Henry, the party were optimistic they could win at least one seat.

The group also looked to be the best chance for an independent to gain a seat in the ACT.

There was a strong showing for the party, with it winning 9.2 per cent of the vote in Ginninderra, more than half the quota required for a seat.

It could have been a scare for Labor, whose third-highest polling candidate in the seat, Attorney-General Gordon Ramsay, has only half a quota.

But with Mr Stefaniak and Mr Henry only having 0.2 of a quota each themselves, preference flows will likely return the Attorney-General comfortably.

Missed the ACT election coverage? Here are the results from voting day