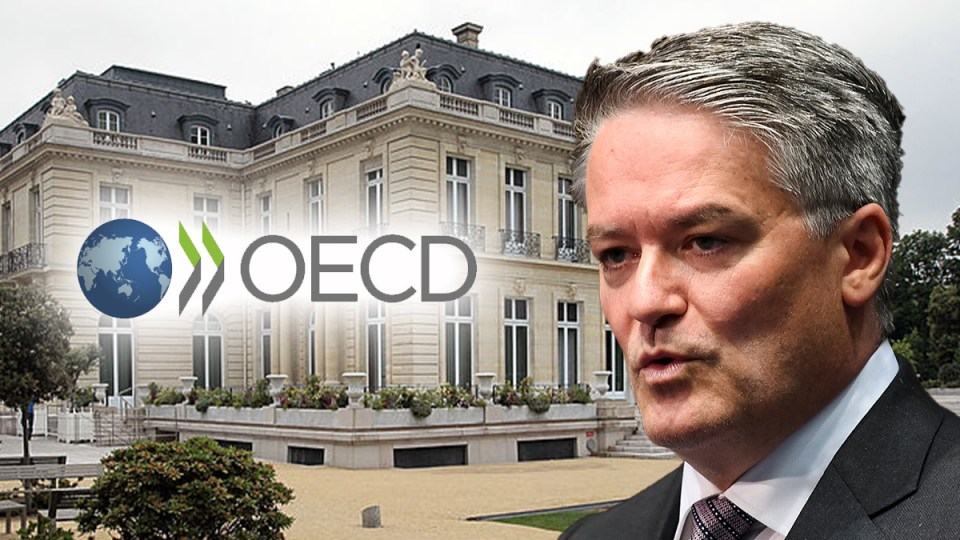 It’s known as the club for rich countries. And Australia’s longest-serving Finance Minister Mathias Cormann wants to run it.

Mr Cormann leaves the Senate at the end of October and will be nominated by Prime Minister Scott Morrison’s government for the OECD’s secretary-general’s position.

The top job is a prestigious honour, but it takes a lot of work to get there.

Current secretary-general Ángel Gurría did almost 150 interviews in member countries to win the prestigious position in 2005.

In the midst of budget week, it was a bolt from the blue to officially confirm the long-rumoured tilt for the OECD – and it was accompanied with a none-too-subtle reminder of the senator’s international experience.

“In these difficult times, the OECD is more important than ever,” the Belgium-born Senator Cormann said in French and German during a press conference.

“To maximise the strength of economic recovery and jobs. To strengthen economic resilience and to achieve sustainable growth in living standards. It would be a great honour to lead the OECD on behalf of these members.”

Mr Morrison said the OECD “needs the sort of leadership that we think Australia and an Australian can provide”.

The PM said he had spoken with Labor leader Anthony Albanese about the nomination, with the hopes of achieving bipartisan support for Senator Cormann’s run.

Despite some in Labor still smarting over former PM Malcolm Turnbull’s decision not to back another former PM Kevin Rudd when he wanted to run for United Nations secretary-general in 2016, The New Daily understands Labor will likely not oppose Senator Cormann’s candidacy.

He faces rivals from the United States, Canada, Estonia and Sweden.

The Swedes have nominated former European Trade Commissioner Cecilia Malmström, who is considered to be the frontrunner.

At the end of the month, he will leave the senate and head to Europe to start lobbying for the position.

Some analysts say he could win strong support from European countries for not being the US candidate, White House adviser Chris Liddell, and win points from the US for not being ‘Euro-centric’.

And the fact he can speak four languages will curry favour, said ANU’s Professor Peter Whiteford who worked for the OECD for eight years.

“He speaks German, French and Flemish – and that is an advantage,” Professor Whiteford said.

“It’s as much a symbolic leadership role than anything hands on because OECD makes recommendations. It’s a think tank, a very prestigious think tank, which covers a wide range of countries.”

Because the OECD works on the basis of consensus between its members, each secretary-general needs to be skilled in bringing parties to the table and making them get along, he said.

“You have to be the sort of person who can achieve consensus from other countries that are sitting around the table,” Professor Whiteford said.

The position is filled by an individual who has had a successful political career in their home country, he said.

“The current secretary-general Ángel Gurría was Mexico’s finance minister before he was nominated. He’s now in his third term. But the person before him, Canadian Don Johnston, was a senior minister in the liberal government in the 1990s.”

But what exactly is the OECD?

The OECD was put together after WWII to help like-minded governments share expertise, compare policies and seek answers to global issues.

Made up of 37 member countries, the OECD was originally formed as the Organisation for European Economic Co-operation in 1948 and was tasked to operate the Marshall Plan, the American aid program for Europe.

Things have changed and while the OECD’s remit has expanded, its power is relatively low, said University of Sydney Associate Professor John Mikler.

“It’s not consequential in the sense it doesn’t make rules, it’s not like the United Nations or the World Bank or IMF,” he said.

“It does research, produces publications and to some extent sets the agenda between members. That’s what it does.”

The OECD is known for doing three major things, producing regular economic reports, its work around tax avoidance and its analysis of education standards or PISA, which sets governments, teachers and parents fretting every time the rankings are dished out.

“One way to think about it is as a norm entrepreneur,” Professor Mikler said.

“It says this is the way things could be looked at, and what the member states do is up to them.

“It’s not like the World Trade Organisation where countries bring disputes against each other and the WTO decides ‘yes, there has been an infringement, or no there hasn’t’. It doesn’t have any judicial powers like that.”

Club for rich nations: Here’s who Mathias Cormann has to beat for OECD job