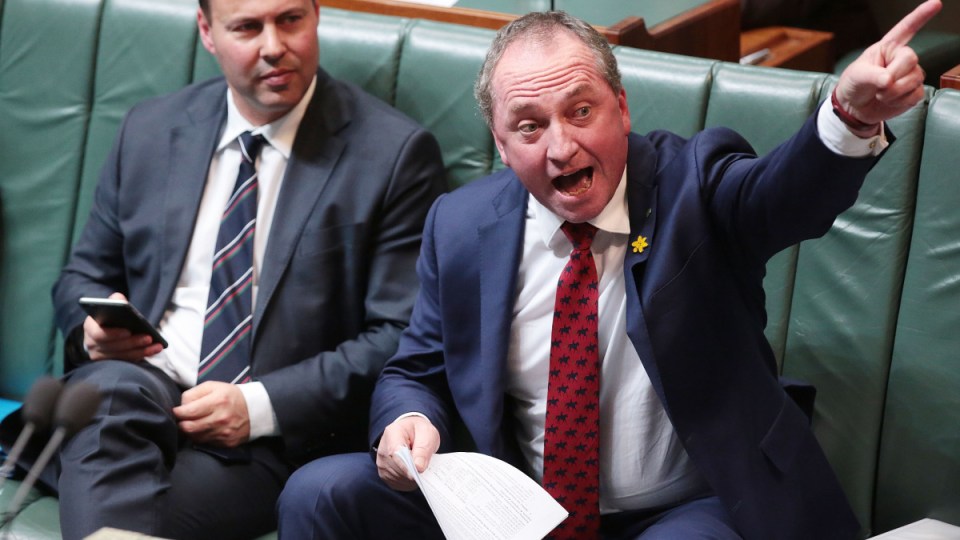 Barnaby Joyce, who was defeated in a Nationals leadership challenge by Michael McCormack, has lashed out at his leader. Photo: Getty

Barnaby Joyce has delivered a brutal sledge against the man he failed to depose in a leadership coup and – believe it or not – it’s all about mangling the English language.

In an 800-word riposte to the party room that rejected his political resurrection on Tuesday, the Jesuit-educated ex-leader has absolutely dragged Deputy Prime Minister Michael McCormack for his deployment of the word “learnings”.

Mr Joyce, who is fond of quoting Latin from his studies at St Ignatius’ College Riverview, accused those of using the word of having poor grasp of grammar – a particularly brutal attack given Mr McCormack’s former employment as a regional newspaper editor.

Emerging bruised and slightly bloodied but unbowed from Tuesday’s leadership ballot, Mr McCormack declared this week he had experienced “learnings” from the Nationals’ leadership turmoil.

“I didn’t get blasted out. You always take learnings. I’ll take on board what my colleagues said [but] I don’t agree necessarily with everything the media has written about this latest attempt,” he said.

In his response on Facebook, Mr Joyce took aim at the use of the word “learnings”, without specifically mentioning his party leader.

“There was a spill of positions, I stood and I lost. I respect and support the vote of the room and will strive for the re-election of a Morrison-McCormack government,” Mr Joyce wrote.

He went on discuss climate change, amid renewed tensions in the Coalition over the issue, urging Australia to go nuclear.

“If you want a macro-climate policy to show the world our leadership on reducing carbon emissions, then we must bring in nuclear power and development of the most efficient coal power technology that uses the least units of coal for the greatest output of power,” he said.

“Wanting to develop the most efficient coal-fired power technology in the world is not disavowing the realities of climate change, it is actually something that could be provided to substantially curtail emissions.

“If zero emissions are the goal, then surely nuclear energy should be supported, but it is not. If wind towers are a moral good and environmentally inoffensive, why can’t we have them just off the beach at Bondi so we can feel good about ourselves while going for a surf? It would cause a riot. Do you want a 3000-hectare solar farm next door to you? Lots of glass and aluminium neatly in rows pointing at the sun. I am not sure others will want to buy that view off you when you go to sell your house!

“The weather has determined the political climate and everyone is manipulating the recent calamitous events to push their own particular barrow.”

Contacted by The New Daily about the post and to confirm he had studied Latin as a teenager, Mr Joyce simply replied “Docendo discimus”.

Translated from the Latin, that means, “we learn from teaching.”

He added: “You don’t have to speak Latin but English helps.”

Down but not out, vanquished Joyce sledges his party leader