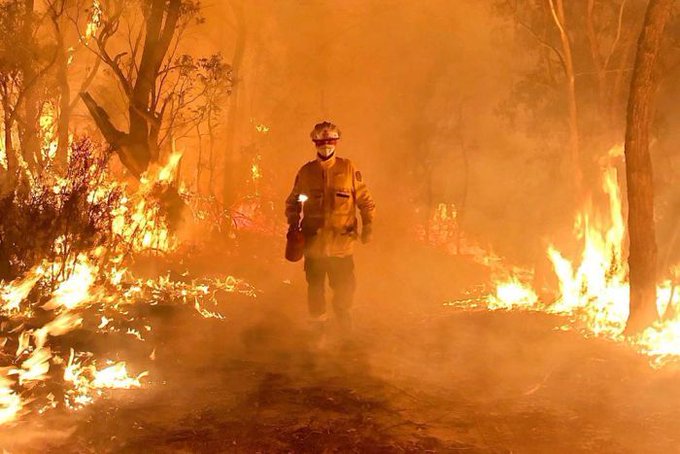 The uncertainty over the future of the research centre comes after a summer of deadly fires in Australia. Photo: Twitter

As a catastrophic bushfire emergency unfolded across three states on Saturday with lives lost, homes destroyed and Christmas holiday plans for thousands of people in chaos, Prime Minister Scott Morrison is set to fly back into Sydney on Saturday night.

Amid mounting pressure to return home, cutting a family holiday in Hawaii short and issuing a statement he “deeply regretted” his trip causing offence to anyone, Mr Morrison’s office confirmed he would be “landing later tonight [Saturday]”.

His wife Jenny and their two daughters Lily and Abbey are still in Hawaii.

He will arrive home to several out-of-control bushfires across Greater Sydney, with major roads and freeways west and south of Sydney blocked, a bushfire emergency in Gippsland in Victoria and the devastation from three bushfires in South Australia.

He is expected to visit the NSW Rural Fire Service headquarters over the weekend.

Just five days before Christmas, hundreds of families who have been refused re-entry to their homes are seeking emergency shelter, while up to 500 elderly nursing home residents are sitting out the disaster away from the fire front of the Gospers Mountain blaze north of Sydney.

“I deeply regret any offence caused to any of the many Australians affected by the terrible bushfires by my taking leave with family at this time,” Mr Morrison said on Friday.

“I have been receiving regular updates on the bushfires disaster as well as the status of the search for and treatment of the victims of the White Island tragedy.”

Two volunteer firefighters, Geoffrey Keaton, 32, and Andrew O’Dwyer, 36, were killed in a vehicle turnover near Buxton, south west of Sydney, on Thursday night.

“Given these most recent tragic events, I will be returning to Sydney from leave as soon as can be arranged,” Mr Morrison said.

Federal opposition leader Anthony Albanese said the circumstances were a problem of the government’s own making.

“I find it quite extraordinary that the usual protocols of the prime minister saying he is going on leave, how long he would go for and who would be acting in his absence have not been followed and, indeed, media inquiries were met with misinformation, at best,” he told reporters on Saturday.

“This is a government that doesn’t like scrutiny,” he said.

He has also called for volunteer firefighters to be compensated for their contribution to battling blazes across three states over the past weeks.