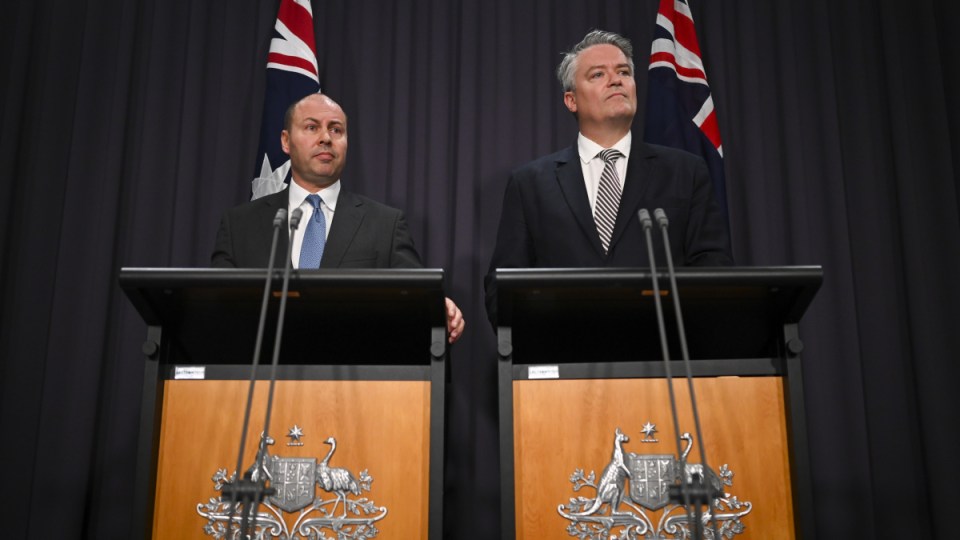 Treasurer Josh Frydenberg and Finance Minister Mathias Cormann have revealed a drop in the forecast surplus.

Treasurer Josh Frydenberg “couldn’t give a stuff’ Australians are facing higher unemployment and weaker wages, and should stop sitting on his  hands after a budget update that has collectively slashed more than $21 billion from forecast surpluses over the next four years.

That’s the warning issued by Labor’s treasury spokesman Jim Chalmers on Monday, after the Morrison government confirmed workers will earn less than expected and spend less and that as a result it was slashing the forecast surplus.

“Everything has been downgraded in this MYEFO, but especially the government’s economic credibility,” Dr Chalmers said.

“Morrison and Frydenberg couldn’t give a stuff that Australians are facing higher unemployment and weaker wages and slower growth,” he said.

“If they cared enough about the workers and families of this country, they would stop sitting on their hands.”

The bad news for workers is that a reduction in forecast wage growth means less money in the pockets of employees. As a result, they will pay less income tax.

That means lower tax revenues for the government. Personal income tax collections will tumble by $7 billion over the four-year forward estimates, courtesy of lower than expected wage growth.

Families are also expected to spend less, with forecast GST revenue down $9 billion. That’s more than half of the $30 billion revenue downgrade, despite government claims that “global economic headwinds” are to blame.

But Mr Fydenberg said he “wasn’t going to take lectures” on wage growth from Labor, and Finance Minister Mathias Cormann said workers were better off under the Liberals because income tax was lower.

“Let’s be clear on this – real wages growth under our government is stronger than it was when Labor lost government,” Senator Cormann said.

“Real wages growth, the gap between wages growth and inflation, is bigger than it was when Labor lost government. What actually matters to the Australian people is how much of their own money remains in their pocket and under Labor, demonstrably, they would have been significantly worse off.”

There are no new policy measures to cut spending in MYEFO, which traditionally over the years has included such measures. But it does include $8 billon over the forward estimates in new spending, including bringing forward infrastructure projects to stimulate the economy and previously announced measures to tackle the drought and bushfires.

“Despite significant revenue write-downs on the back of sustained global and domestic economic headwinds, surpluses of $5 billion this financial year and cumulative surpluses of $23.5 billion over the forward estimates are expected to be delivered,” Mr Frydenberg said.

“As the IMF and the OECD have done, we have downgraded global growth in 2019 and 2020 as economies all over the world experience the challenges from global trade tensions.”

The forecast surplus has been nearly halved in 2020-21, tumbling from $11 billion to $6 billion. That pattern of dramatic downgrades to the expected surplus continues over the forward estimates, with a $17.8 billion surplus slashed to just $8.4 billion the following year.

The drought has also hit the budget, with the Morrison government confirming the urgent need to help farmers will come at a cost.

“More than $300 million will be invested in the Drought Communities Program to help eligible councils to complete the local capital works and drought relief projects,’’ Mr Frydenberg said.

“The government is also assisting drought-affected communities with two-year interest-free loans to support cash flow to farmers and other viable businesses.”

As announced during the election campaign, the extension of the “efficiency dividend” to keep spending under control in government departments will deliver savings of $1.5 billon over the four-year forward estimates.

Opposition finance spokeswoman Katy Gallagher accused the government of abandoning its goal of eliminating net debt by the end of the next decade and warned trying to blame Labor for the mess after seven years of government wouldn’t wash.

“The record and what you can see in the numbers, in the MYEFO today, is that net debt is up to $392 billion on their watch,” she said.

“This is the seventh year, this is their budget, their MYEFOs, their updates they put out. Gross debt has more than doubled and is now at $556 billion. In this update, they have chucked away their promise on eliminating net debt in 29-30, that promise has gone.”