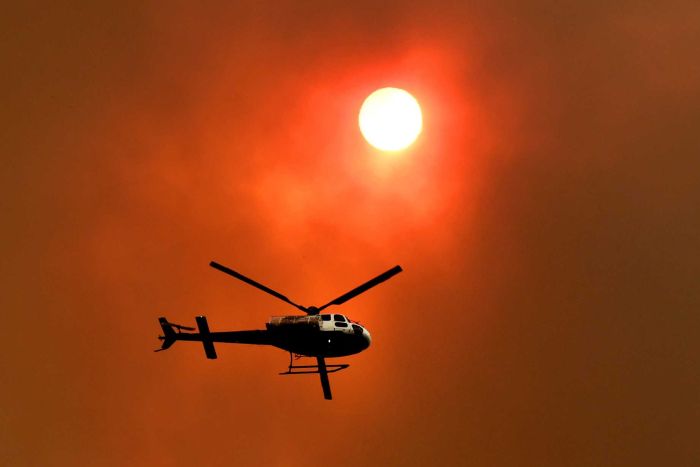 Communities are the focus on the ground, but people are also wondering: Where is Scott Morrison? Photo: AAP

Scott Morrison has slapped down a reporter who asked about a global index that ranked Australia as the worst-performing country on climate change policy, arguing he “completely rejects it”.

At a press conference in Melbourne on Thursday, the Prime Minister was repeatedly challenged about the link between the bushfires and climate change as smoke continues to choke Sydney and Canberra.

Mr Morrison was asked “do you acknowledge that the bushfires are related to climate change?”.

“Of course I have, I have all year,” he replied.

“OK, so how can you declare our achievements are great in view of what’s happening around the country?”

“What I’m saying is Australia is meeting and beating our emissions reduction targets and our emissions are around 50 million tonnes lower on average over the term of our government than what we inherited,” he said.

But the Prime Minister grew testy when asked about the 2020 Climate Change Performance Index and the report card on his own government’s performance.

When asked “why not,” he replied it was “not credible”.

During the press conference, the Prime Minister urged “calm” over the smoke crisis.

“We also know that there are many contributing factors that relate to these fires. The drought is obviously one, and the dryness of the bush is the biggest factor,” he said.

“I know, because I’m a Sydney-sider, how unusual it is to see haze across my city. And I know how distressing this has been, particularly for young people, who wouldn’t have seen that before… that’s why it’s important to have a sense of calm about these matters and calm on the basis of information.”

NSW Energy and Environment Minister Matt Kean declared this week “this is not normal”, with the Liberal MP drawing praise from the Greens.

“This is not normal and doing nothing is not a solution. If this is not a catalyst for change, then I don’t know what is,” he said.

“We need to reduce our carbon emissions immediately, and we need to adapt our practices to deal with this kind of weather becoming the new normal.”

Mr Morrison said the government was taking action but stressed the suggestion that anything Australia did alone would not have reduced global warming.

“I think scientists have observed, and we should recognise, that climate change is a global issue,” he said,