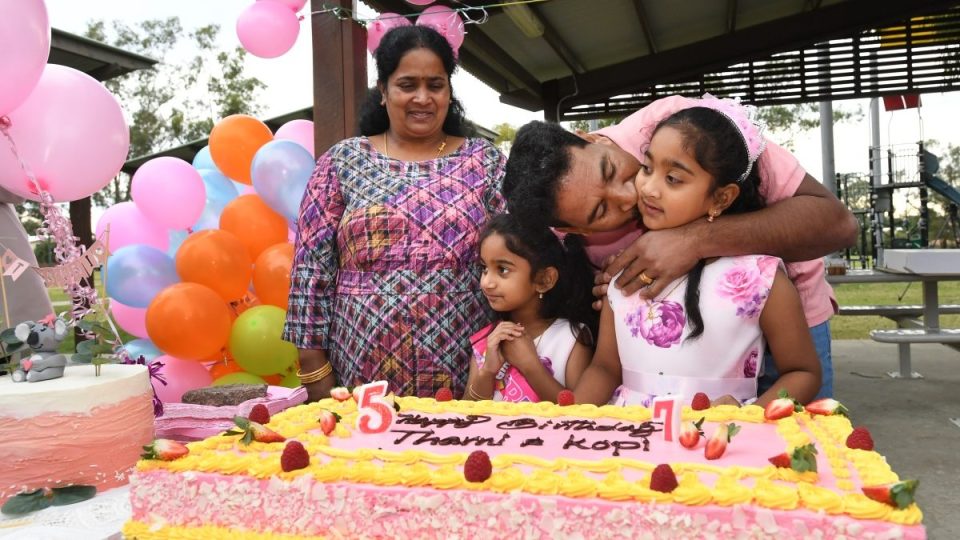 The federal government has approved permanent visas for the Nadesalingam family.

Supporters of the family say home affairs department officials visited the family in the central Queensland town of Biloela at 2.30pm on Friday to deliver the good news.

Immigration Minister Andrew Giles later confirmed that, “following careful consideration of all relevant matters and options”, he had exercised his power under section 195A of the Migration Act 1958 to intervene in the case.

In June when the family returned to Biloela, Prime Minister Anthony Albanese said nothing was stopping the Tamil asylum seekers from obtaining permanent residency in Australia.

Priya and Nades Nadesalingam and their daughters Kopika and Tharnicaa returned to Biloela in June for the first time since being detained in March 2018.

The former Coalition government had tried to deport the asylum seekers to Sri Lanka. After an 11th-hour court injunction, they were held at the Christmas Island detention centre for two years, then moved to community detention in Perth.

Following the May election, the new Labor government gave the family permission to return to Biloela on bridging visas.

Mr Giles said the government had delivered on its promise to resolve the family’s immigration status.

“This decision follows careful consideration of the Nadesalingam family’s complex and specific circumstances,” he said.

“I extend my best wishes to the Nadesalingam family.”

The Coalition government had concerns letting the family stay in Australia would be a green light for people smugglers.

Mr Giles said the Albanese government would continue to intercept and return any unauthorised vessels seeking to reach Australia, under Operation Sovereign Borders.

“For anyone who attempts to migrate via an unauthorised boat to Australia – you will be caught, returned or sent to a regional processing country,” he said.

“I do not want people to die in a boat on a journey when there is zero chance of settling in Australia.

“This has not changed since the last government. We are not considering changing this policy.”