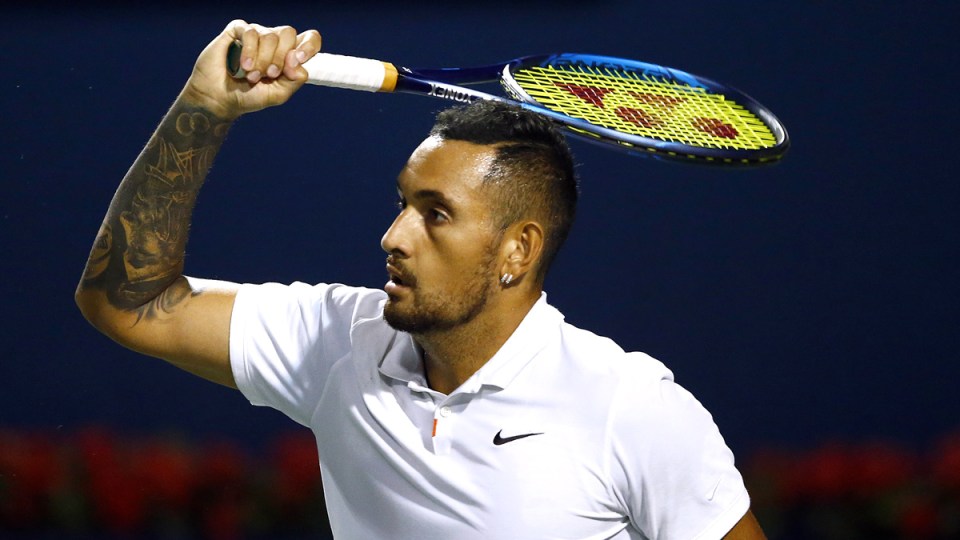 Nick Kyrgios admits his game goes beyond backhands and forehands - rattling opponents is just as important.

Nick Kyrgios will carry a win-at-all-costs attitude into Sunday’s Wimbledon final, conceding he’ll need to get inside Novak Djokovic’s head to have any hope of conquering the super Serb.

Kyrgios has won his only two meetings with the three-time defending Wimbledon champion – both on hard courts in straight sets in 2017 – but he’s confessed to deliberately stirring Djokovic up with random, borderline antics.

“I’ve never accepted losing. I hate it so much it eats me up,” Kyrgios revealed last month on the Turn Up The Talk podcast.

“There are times when I cross the line and I’m not going to say that I’ve always been a good role model for kids watching,” Kyrgios said.

“Sometimes I do cross the line, but that’s just my passion. That’s my emotion. I am not able to control my emotions like Roger Federer – but who is?

“It’s like, literally, there’s a handful of guys in the whole world who can handle their emotions like that and they’re different breeds, and I’m not like that.”

Australia’s 1987 Wimbledon champion Pat Cash last week accused his hot-headed countryman of “cheating” and “manipulating” his opponents and “taking tennis to the lowest level” during his ill-tempered third-round win over Stefanos Tsitsipas.

When asked if there were certain players he’d tried to rattle on court, Kyrgios acknowledged on the podcast that he’d most definitely tried to get under the skin of the sport’s big three.

“Oh yeah, I feel like the majority of the tennis tour when they play me is very confused sometimes with what’s going on,” Kyrgios said.

“I always have the analogy that when I’m playing Djokovic or Federer or Nadal, they’re so used to having such professional kind of standards.

“Their European country clubs that they play out of are so clean and proper that, if you liken them to my two courts that are around my house, they are literally roads with cracks in it, and weed.

“So I’m just trying to take them … if I was to play them there, what are my best chances to win.

“So I just feel I to just take them to Watson, back to the streets of Watson (in Canberra) and try and play that game style where I’d be talking with my brother and competing.

“And it does stir them up.”

‘So many screws loose’

Kyrgios said of his two clashes with Djokovic in Indian Wells and Acapulco five years ago: ‘I was literally talking the entire change of ends and talking when we crossed paths, even to myself”.

“And he would look back and think, ‘This guy has so many screws loose’.

“Just random everything and, like, if he missed a ball, I’d say ‘There it is’. Just little type of things that he would just side-eye me and I’m, like, ‘I’m right there’.

“Because if I don’t do that, my chances of winning go down immensely. If I’m just trying to be professional and outclass him, it’s not going to happen.

“Classy and Kyrgios don’t go together.

If he can follow up Ash Barty’s triumph from 12 months ago, Australia will have a women’s and men’s champion in successive years for the first time since Margaret Court won in 1970 and John Newcombe in 1971.

‘I never accept losing’: Kyrgios psychs himself up for clash with Novak Djokovic