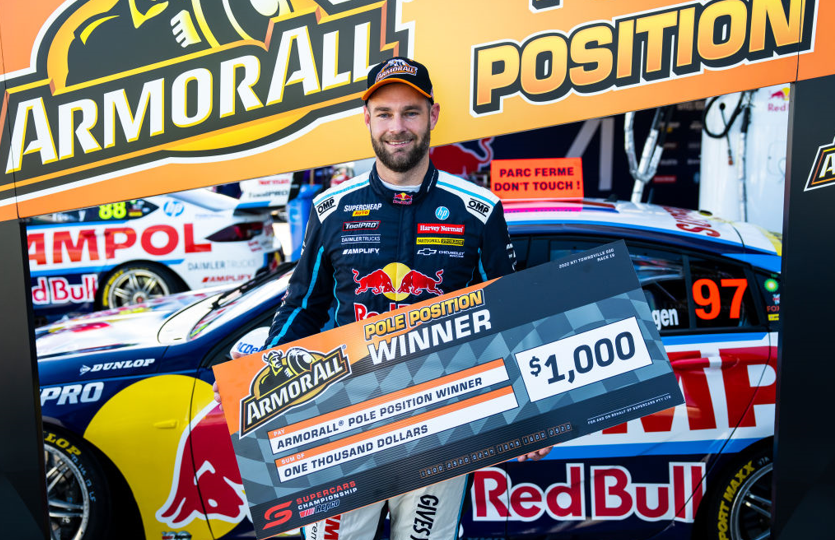 Reigning Supercars champion Shane van Gisbergen has delivered a masterclass on his way to a ninth career win at Reid Park in Townsville, hunting down Will Davison in the dying stages to secure victory.

Davison got the jump at the start and the pair battled throughout Saturday’s 250km race as teams pondered when to deploy their super soft compound tyres.

Davison and 2021 Bathurst winner Chaz Mostert opted for an undercut with over 35 laps to go, switching to the super softs with hopes they’d have enough life to hold on as Van Gisbergen stopped late.

But then came the raging Red Bull.

The New Zealander, chasing his 10th win of the season, hunted down Tim Slade, Mostert, then Davison with five laps remaining. His rampaging victory earning the Triple Eight Racing team their 21st win in Townsville.

It all came down to strategy after Slade and David Reynolds started the race on the super soft compounds, powering to them to the front before making the switch to harder compound tyres after 30 laps.

Most teams took notice, as Slade’s pace rapidly died off in the final stages but the CoolDrive Auto Parts driver still mustered eighth position at the chequered flag.

But in the Red Bull camp, Van Gisbergen’s team pumped his car full of fuel on lap 31, significantly limiting its speed and manoeuvrability but giving the championship leader a short window late to have a quick second compulsory pit stop.

Re-entering the field with 25 laps remaining, the Kiwi made quick work of Slade before finding Mostert in his sights. Then, with 12 laps to go, he easily passed him to set up a cracking finish.

Van Gisbergen faced a 6.1 second gap with 10 laps remaining but that narrowed to a 1.9 second split in just four laps.

With five to go the pair entered the slowest and final corner of the circuit, with van Gisbergen criss-crossing behind Davison to snatch the lead and cruise home to his fourth win from his last six starts in Townsville.

In full voice: Australia’s adopted diva Marcia Hines celebrates 60 years on stage
See you in court: Twitter vows to sue as Elon Musk walks away from $64b deal
Today's Stories