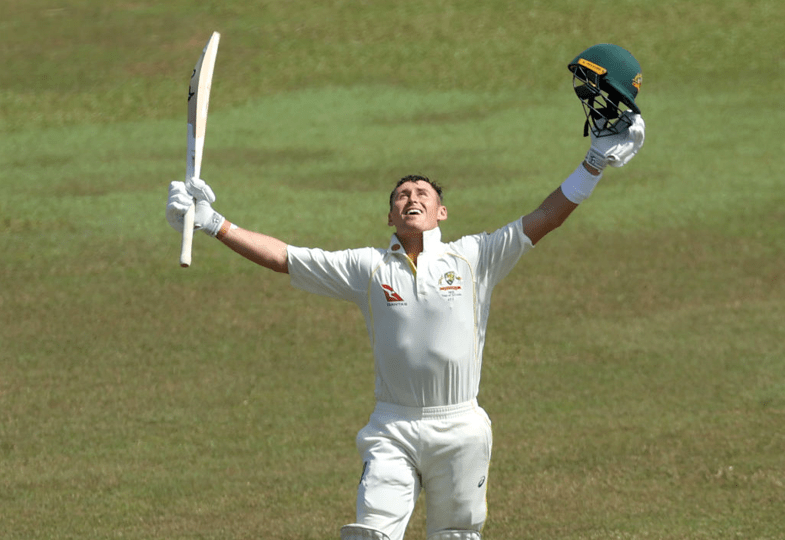 Marnus Labuschagne celebrates his century after a lucky escape earlier in the day. Photo: Getty

Marnus Labuschagne has made Sri Lanka pay for Niroshan Dickwella’s sloppy glovework, helping Australia to 3-204 with a century on the opening of the second Test.

Labuschagne fell right on tea on day one for 104, but not before he and Smith put Australia in a commanding position.

Smith is unbeaten on 52, in pursuit of his first Test century since January 2021.

But the story could have been so different for Sri Lanka.

On 28 at the time, Labuschagne jumped down the wicket and missed a Ramesh Mendis delivery.

Dickwella had all the time to catch the right-hander short of his ground, but fumbled the ball and let Labuschagne off the hook.

“It was a big moment in the game,” Australia’s former wicketkeeper Brad Haddin said on the local commentary.

“The first thing I am looking at his eyes. It’s first morning of Test, it’s a nice flat wicket.

“He has just assumed Marnus Labuschagne is going to hit that ball. His eyes were on the batsman, they weren’t on the ball.

“He has relaxed a little bit. That’s little moments as a wicketkeeper. It can cost you a wicket but it can also cost you a Test match.”

Labsuchagne proceeded to hit two boundaries off the next over as he began to capitalise on the error.

Dickwella eventually stumped him 76 runs later when Labuschagne ran past a delivery from debutant Prabath Jayasuriya.

By then, the damage had been done.

Labuschagne’s century is his first outside of Australia, and the seventh of his Test career.

At the other end, Steve Smith has been in control.

Run out in his only innings in the first Test, Smith is back to his usual best, occupying the crease in the series finale.

The 33-year-old has driven nicely through the covers when given the chance, with Sri Lanka’s spinners too often offering up full tosses on off-stump.

His 134-run stand with Labuschagne came after Usman Khawaja made 37 before being bowled by a Mendis ball that spun away and took the top of his off-stump.

David Warner was also bowled for five by Kasun Rajitha with a delivery that held its line and beat the outside edge, extending Warner’s run without a Test century to 20 innings.

That wicket – and the pace of the pitch – looks to have vindicated Australia’s decision to stick with a second quick in Mitchell Starc ahead of recalling Glenn Maxwell as a spinning allrounder.