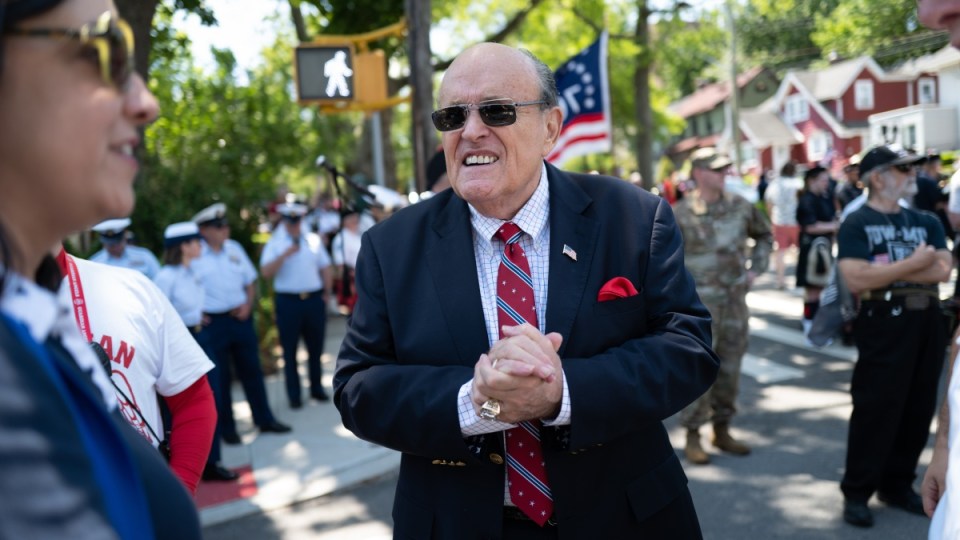 Rudy Giuliani out and about on New York's State Island back in May. Photo: Getty

A supermarket worker has been arrested after apparently smacking former Trump lawyer Rudy Giuliani in the back during a campaign event.

Police say Daniel Gill, 39, slapped Mr Giuliani on the back while he was handing out flyers at a Staten Island supermarket.

Mr Giuliani – who is also a former New York mayor and federal prosecutor – was at the shop to campaign for his son Andrew. He is in the running for the Republican nomination for governor of New York.

“All of a sudden, I feel this, ‘Bam!’ on my back,” Mr Giuliani told the newspaper.

“I feel this tremendous pain in my back, and I’m thinking, what the – I didn’t even know what it was. I hear this guy say, ‘You’re a f–king scumbag’, then he moves away.”

Mr Giuliani, 78, was uninjured and refused medical treatment. He told The New York Times that he had “red marks” on his back but wasn’t bleeding.

“My back hurts, but otherwise I’m able to walk and stuff like that,” he said.

“He almost knocked me down. Thank God for a 78-year-old, I am in pretty good shape.

“If I wasn’t, I would have hit the ground and probably cracked my skull.”

New York police didn’t mention abortion, but said a man had hit Mr Giuliani in the middle of his back while saying, “What’s up, scumbag?’, according to the paper.

“This particular incident hit very close to home. The assault on my father, America’s Mayor, was over politics. We will not be intimidated by left wing attacks,” he said.

“As governor I will stand up for law and order so that New Yorkers feel safe again. This message has resonates with voters throughout my campaign, leading up to Tuesday’s primary.”