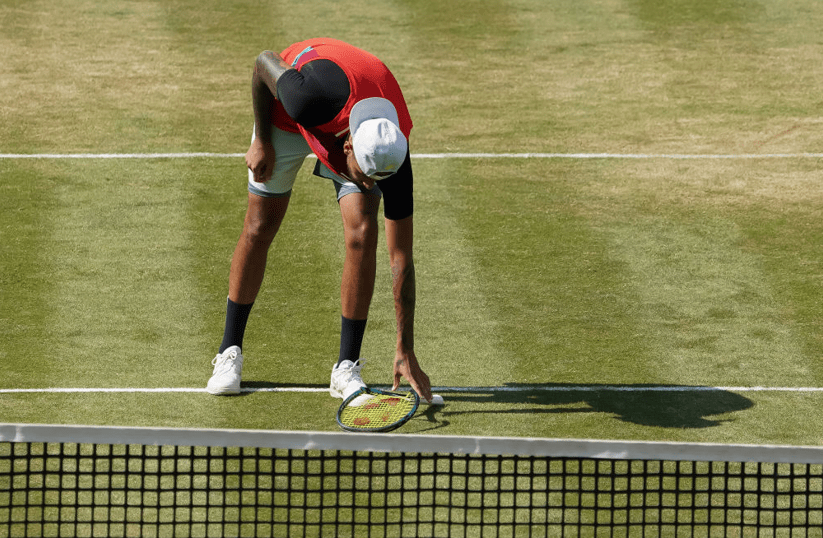 Nick Kyrgios stoops to retrieve the remains of his racquet after blowing his cool once again. Photo: Getty

Nick Kyrgios has gone down to another racquet-smashing, umpire-berating defeat after protesting that he’d been racially abused by a fan at the Stuttgart Open.

The Australian, who argued with the German crowd, had to be persuaded to continue his semi-final match at the grasscourt event before losing to Andy Murray.

In familiar fashion, Kyrgios got embroiled in arguments and controversy, both with the crowd and the chair umpire, in a second-set meltdown on Saturday before being beaten 7-6 (7-5) 6-2 by the rejuvenated former world No.1 Murray.

But after the match, Kyrgios revealed that he had retaliated after hearing a racial slur.

“When is this going to stop? Dealing with racial slurs from the crowd?” he wrote on Instagram.

“I understand that my behaviour isn’t the best all the time – but ‘you little black sheep’, ‘shut up and play’ – little comments like this are not acceptable.

“When I retaliate to the crowd, I get penalised. This is messed up.”

Britain’s two-time Wimbledon champion Murray was left admitting the match “wasn’t fun in the end” as he reflected on the latest controversy involving Kyrgios, a friend he still believes has the talent to be one of the world’s best players.

The match reflected a couple during in the US earlier this year when Kyrgios ended up copping a total of $US 60,000 in fines for his behaviour at both Indian Wells and the Miami Open.

His latest meltdown may incur further wrath from the ATP as he argued with the crowd and ended up being jeered off court.

In what had been an entertaining and hard-fought clash in the first set, a frustrated Kyrgios got a code violation early in the tiebreak and then copped a point penalty after losing the set on what seemed a bad bounce on the final point.

Still raging as the second set kicked off, he was broken straight away after throwing in a couple of double faults and, amid arguments with the umpire and the crowd, was then docked a one-game penalty.

Evidently stung by the comment from the crowd, Kyrgios wouldn’t continue playing, sitting in his chair until the supervisor emerged to convince him to play on.

Having lost his focus completely, the Australian then delivered a numerous errors as Murray sealed his spot in the final comfortably.

“You’re always kind of battling yourself as well as the opponent, it’s one of the difficult things about individual sports,” said Murray, after reaching the 70th final of his distinguished career.

“Nick has the potential to be one of the best players in the world, there’s absolutely no question about that. But, yeah, he obviously got very frustrated in the second set and made it a lot easier for me.

“It wasn’t fun in the end. The second set wasn’t a proper match. The end of the first set was deciding.”

In the final, Murray, whose revival at the age of 35 after career-saving hip surgery is quite inspirational, will face second seed Matteo Berrettini, who, playing his first Tour-level final of the season, beat Germany’s Oscar Otte 7-6 (9-7) 7-6 (7-5) in the other semi-final.

Kyrgios had earlier been involved in a series of entertaining rallies, also enchanting the crowd with his underarm serve and ‘tweeners’.

Two-time Wimbledon champion Murray, who had beaten top seed Stefanos Tsitsipas the previous day, is in his first grass-court final for six years, since he beat Milos Raonic for his second Wimbledon title in 2016.

“It has been a long time since the last final [on grass]. A lot of ups and downs, but I kept going and kept working and finally managed to get to another one. I am proud of the effort I have put in,” he said.