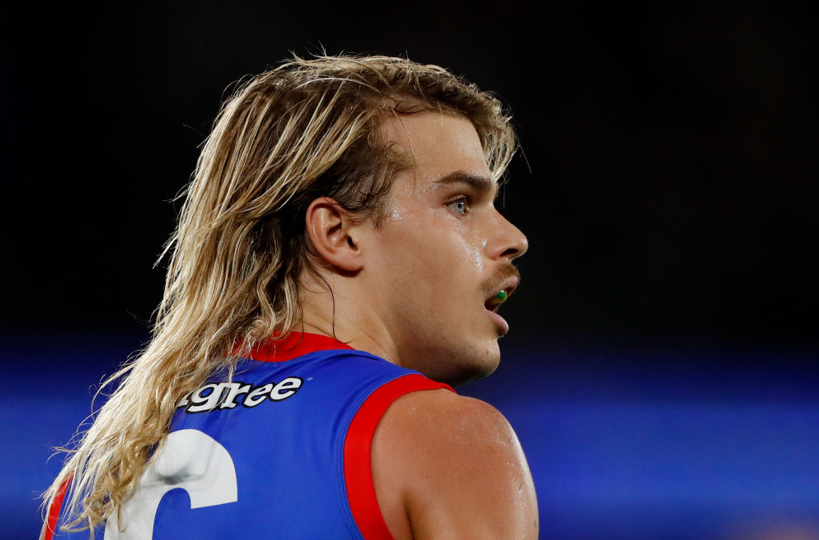 One of AFL's most dashing and charismatic stars, a social media post has placed Bailey Smith at the centre of a scandal. Photo: Getty

The Western Bulldogs have reacted to social media images showing star Bailey Smith holding a bag of white powder, announcing “it is our responsibility as a club to ensure we have supported, and we continue to support, Bailey’s health and wellbeing.”

The club’s statement, issued mere hours after the bombshell snapshot was circulated, also includes an admission by Smith “to indulging in behaviours in late 2021 of which I am deeply ashamed.”

“In confronting this, the temptation is to speak in vague generalities and avoid the issue,” the charismatic midfielder continued.

“However, I am determined to learn the lessons of my past and be a better person in the future.”

Smith, regarded by many as the most marketable player in the league for his crowd-pleasing feats and flying trademark mullet, is one of the game’s most recognisable figures.

But the 21-year-old has struggled with the attention at times and took a leave of absence last December to deal with personal issues – a break that he explained on Saturday as a consequence of the Bulldogs’ third-quarter collapse and 2021 grand final loss to Melbourne.

“The state of my mental health over that period post-grand final dramatically deteriorated and I spiralled out of control, leading to poor decision making and actions at the time.

“All of this resulting in the leave I took from football at the commencement of pre-season training.”

“I understand what happened was outside of what’s expected of AFL players. Unfortunately, I let my emotions get the better of me, which is out of character for me,” Smith said after that incident.

“I am determined to come back in a couple of weeks to continue giving 100 per cent for my teammates and the club.”

The Bulldogs, who have shown only flashes of their mercurial brilliance this season, are 6-6 for the season so far and struggling to secure a berth in the top eight. The team has a bye this week before taking on the Giants next Saturday.