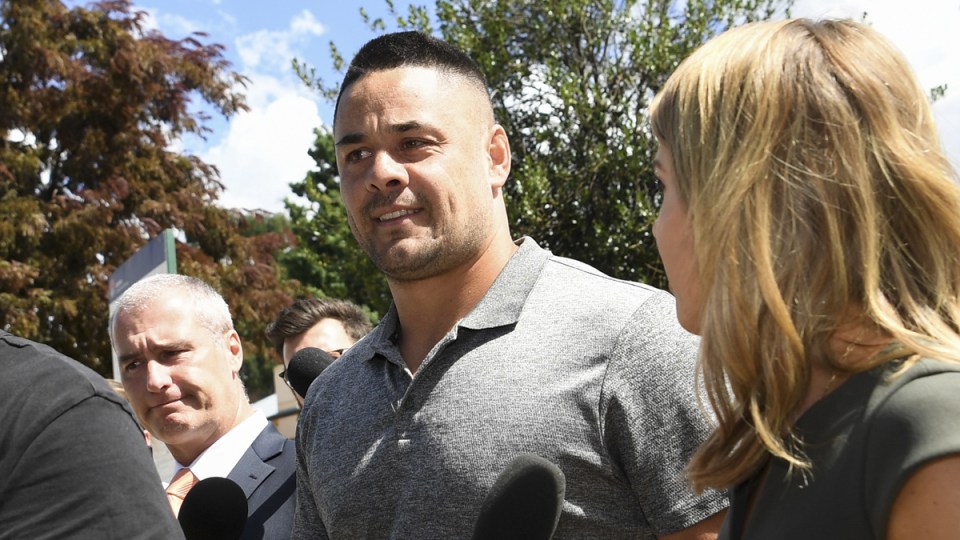 Jarryd Hayne was released from jail in February after an appeal court ordered a retrial.

Former NRL star Jarryd Hayne has failed to have his third trial on sexual assault allegations moved from Sydney to Newcastle.

The reasons Judge James Bennett gave for rejecting the application in the Sydney District Court were suppressed for legal reasons.

The former international player “simply wants his trial to be conducted in Newcastle”, Judge Bennet said on Monday.

“His reasons are not further qualified or explained.”

The Crown opposed the change of venue and said while nine witnesses, including the complainant, lived in the Newcastle area, there was no issue having them travel to Sydney if required.

The court was also told the publicity that would be generated by the high-profile case could have adverse effects on the alleged victim, due to Newcastle being a “relatively small community”.

While the Sydney Downing Centre had dates free for a trial to begin in November or February, the 34-year-old’s new barrister Margaret Cunneen SC was not available then.

A trial estimated to last up to three weeks was set down for March 6 next year.

Hayne was released from jail in February after the NSW Court of Criminal Appeal quashed his convictions and ordered a retrial.

He had served nine months of a minimum of three years and eights months term imposed in May after he was found guilty of two charges of sexual intercourse without consent.

The former Parramatta Eels player faced his first trial in Newcastle in 2020, but the jury could not reach a verdict.

The Crown contended in both trials that Hayne forcibly performed oral and digital sexual intercourse on a woman in her NSW Hunter bedroom on the night of the 2018 NRL grand final.

Hayne has always maintained the encounter was consensual.

His barrister successfully argued for his convictions to be overturned on two appeal grounds – that there was an error in the legal directions given to the jury and an error in a pre-trial ruling on evidence.

Hayne’s bail conditions include a $20,000 surety, surrendering his passport and reporting to police three times a week.