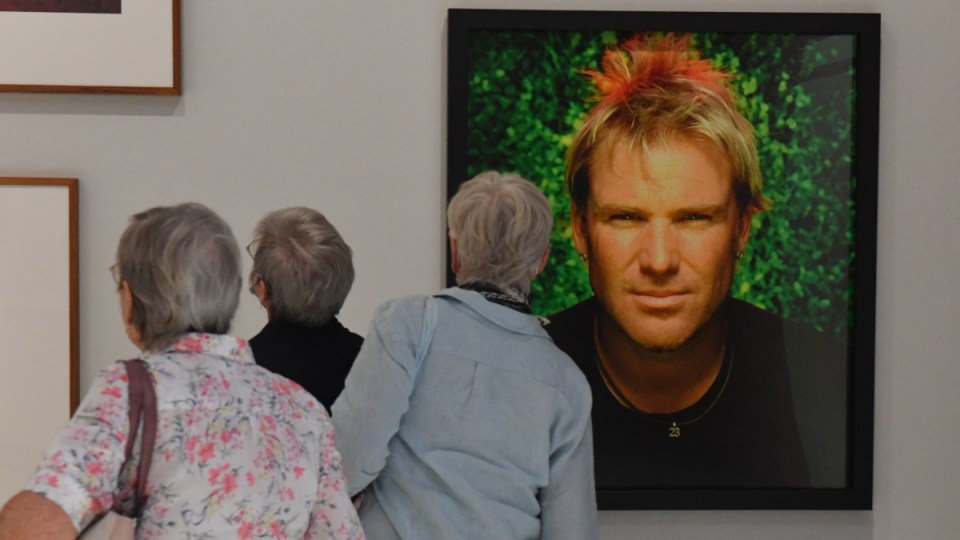 Patrons have been drawn to a photo of Shane Warne at the National Portrait Gallery. Photo: AAP

When celebrity photographer Robin Sellick shot Shane Warne’s portrait in Melbourne in 2006, he knew he had to resist the cricket star’s famed charisma to get the picture he wanted.

“I didn’t warm too much to him, I sort of kept him a little bit distant – that gave the photograph an interesting tension,” Mr Sellick said.

The photo is in the National Portrait Gallery in Canberra, and since the news of Warne’s death, patrons have been drawn to the famous picture, even posing for selfies.

Sellick, who has shot for titles including Vogue and Rolling Stone during his own international career, said he was pleased to contribute to how the cricketer is memorialised.

“My goal was always to take the best portrait of someone that they’ll ever have, so when they pass away they can be remembered,” he said.

Warne died on March 4 in Thailand from a suspected heart attack.

Unlike most pictures of Warne that show him smiling and at ease, Sellick wanted his photo to expose the intensity and determination that made him a standout Test player.

On the day of the shoot in early January 2006, he set up lights on the tennis court of Warne’s sprawling Melbourne mansion.

Warne arrived from the hairdresser with a hairdo too spiky for the photo, and much to Sellick’s own annoyance, the celebrity athlete was also late for the shoot.

But the awkwardness and tension that created was exactly what was needed for the brightly coloured shot, which shows Warne staring straight at the lens in the same manner he might try psych out an England batsman.

“I think I told him about determination, and I really pushed him to get that expression … the intensity of his stare,” Mr Sellick said.

He said Warne’s death at the early age of 52 was tragic, describing the cricketer as an “everyman hero” who made his own rules.

But the man who has also photographed the likes of Kylie Minogue and Cathy Freeman said his job was not to approach his famous subjects as a fan.

“In order to get a great portrait of somebody you have to be able to meet them at eye level,” he said.

The picture was taken towards the end of Warne’s international Test career, months after he became the first bowler in history to take 600 Test wickets, and amid his divorce from Simone Callahan.

The photographer was aware of the huge publicity linked to the couple’s split, so he was surprised to see Ms Callahan in the kitchen that day, making a sandwich.

Sellick took the shot as part of a series about sportspeople to celebrate the Commonwealth Games in Melbourne. Warne was his first pick of top-flight athletes.

By keeping Warne at arm’s length, and retaining the tension needed for such a striking photo, Sellick joined a very small group of people to have played mind games with the spin bowler and come away with a good result.

“Whether he was any good at playing cricket, or any good at being a human didn’t matter, he was a standout, unique person,” he said.