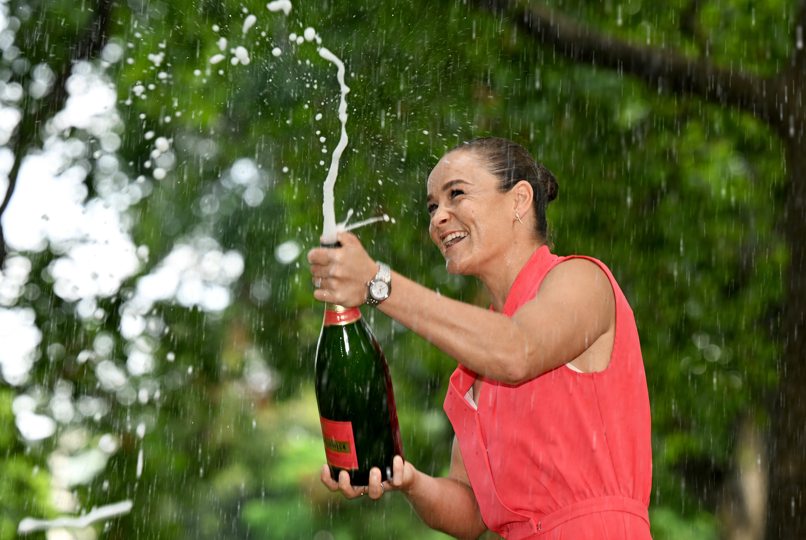 There's no trace of adversity on Ash Barty's face as she celebrates her triumph in the Exhibition Gardens. Photo: AAP

Euphoric in victory, Ash Barty has reflected on the dark times that steeled her “full circle” Australian Open triumph.

The world No.1 is adamant she would never have won the Open, or either of her other two grand slam titles, had she not taken a 15-month hiatus six years ago.

Desperately homesick and burnt out from the grind of life on the gruelling world tour, the teenage prodigy dramatically quit tennis after a demoralising first-round US Open defeat in 2014.

Barty, now 25, says she was unsure then if she’d ever return to the sport.

“It was an open door. It genuinely was a ‘maybe’,” Barty said while savouring her stirring 6-3 7-6 (7-2) Melbourne Park final victory over American Danielle Collins.

“I think not making that definite decision almost made the decision for itself, that (a return) was going to happen. It was just a case of when it would happen.”

After a stint playing professional cricket for the Brisbane Heat in the WBBL, Barty embarked on her tennis comeback in early 2016.

The former Wimbledon junior champion hired Craig Tyzzer as coach and trusted her mentor to build the tight-knit Team Barty that remains in place six years on.

“Without a doubt, this second phase of my career I’ve learnt so much more about myself as a person,” said Barty.

“I’ve grown so much more as a person. Without that adversity I wouldn’t be half the person or player that I am now.

“We all have to find our low points to grow from them.

“Being able to do that and make a really incredible team for this second phase has been the best part of it.

“Being able to start there with ‘Tyzz’ and essentially the same team that we have right now, it is really cool that we’ve done it together because there’s no-one else I’d prefer to do it with.”

But for all her talents and potential, Barty said she could never have imagined joining all-time greats Serena Williams, Roger Federer, Rafael Nadal and Novak Djokovic as the only active players to have won majors on clay, grass and hard courts.

“We spoke about it as a team and understood and reflected on what (winning) Wimbledon meant,” Barty said.

“The French Open in 2019, I was a completely different person. I still had so much growing and learning to do and Wimbledon, I felt, well it was a dream.

“It was the thing I always wanted as a child.

“And maybe now having experienced this at home and played probably my best slam from start to finish here in Australia and do it with such enjoyment is maybe a full-circle moment.

“Understanding what I want most as a player and a person and being able to experience that and have that opportunity to play seven matches on Rod Laver Arena in front of the Australian public and enjoy that with my team is really cool.”