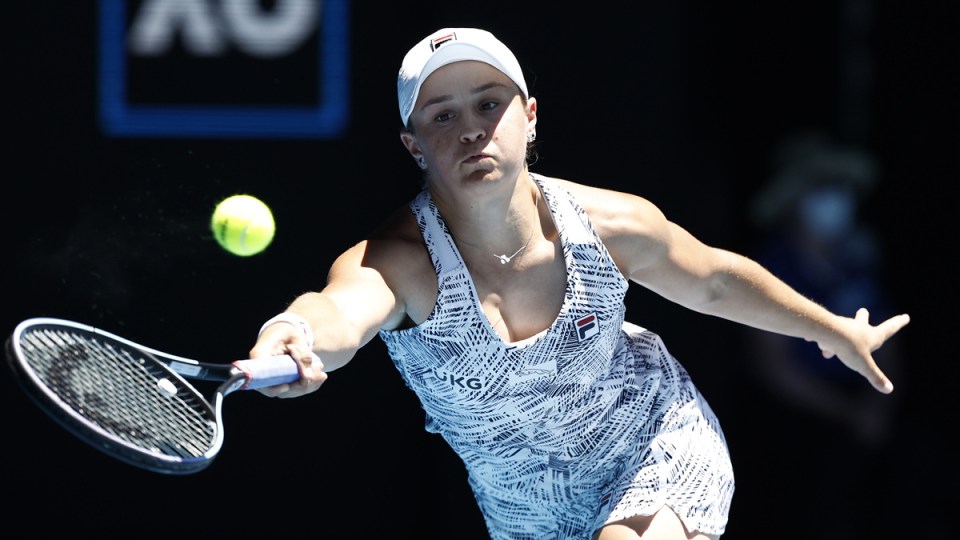 Ash Barty has made short work of her opponents so far. Photo: Getty

This Australian Open is not yet Ash Barty’s to lose but the Queenslander is today closer to the precipice of greatness after her great foe and defending champion, Naomi Osaka, last night unexpectedly crashed out of the 2022 tournament in the week’s big upset.

Osaka was already a set up in her match on Margaret Court Arena when Barty took to Rod Laver Arena and despatched Camila Giorgi in just 61 minutes.

When Barty was done, the Japanese-American was locked at 4-4 in the final set as 20-year-old Amanda Anisimova refused to cede to seniority or expectations.

Osaka can be brilliant, often, but is not always consistent. Her four major

titles to date have come in consecutive years and she is only the 13th seed. Curiously, it was the 11th occasion she has lost at this stage, the last 32, of a major (grand slam) tournament.

Anisimova, beaten by Barty in the French Open semi-finals when just 17, their only meeting, is no patsy despite a current ranking of 60.

At 6-6 against Osaka, a super tie-break (the first to 10) ensued but Anisimova, spurred on courtside by Aussie coaching guru Darren Cahill, who only came on board last week on a trial basis, stood resolute throughout and took the decider 10-5 with some aplomb.

She deserved her win and will face Barty on Sunday in a match that, while it will not be the anticipated Osaka blockbuster, will be a rigorous workout for the Aussie.

Bottom line, the American Anisimova hit hard against Osaka and remained composed all evening, playing without fear or nerves. She will be an awkward opponent indeed.

It was put to Barty afterwards that Anisimova was not the anticipated foe, an assertion she swatted aside.

“That was not my expectation,” she said brusquely.

In fact the evening was a touch all over the place thanks to an earlier 250 minute afternoon whopper on RLA between men’s young guns Matteo Berrettini and Carlos Alvarez that delayed Barty’s entrance by an hour.

The best match of the AO so far? Without question, the Italian Berrettini victorious.

And so to another top Australian today.

Stroll around Melbourne Park and the chances are that if you spotted Rafa, Nick or Ash hatted up and deliberately incognito, you’d know straight away who was beneath the disguise.

The average fan would be far harder pressed to ID the Aussie men’s number one player – Alex de Minaur messing with his mates or browsing the AO merchandise even were he to indulge in anything other than training or playing this tennis fortnight.

At almost 23-years-old, 32nd seed De Minaur remains something of a conundrum to the Australian public. He is a very good player, borderline outstanding, who has won five ATP titles and who reached number 17 in the world last year, With a current rank of 42, he is also light years ahead of most other Aussie male players. Nick Kyrgios and Thanasi Kokkinakis are world ranked in three digits only.

But getting a profile calls for an outlandish persona or a deep run at a major, preferably the Australian Open, a pinnacle “Demon” (as he is universally known) is yet to approach.

Spanish veteran Pablo Andujar stands in his way of a slot in the last 16. They have met once before, in a Futures tournament in Alicante in Spain, a place where, by chance, the Sydney born De Minaur now spends much of his year. They play on RLA at 7pm.

De Minaur is his own man, yet is a product of the Lleyton Hewitt school of perseverance and the full-on. Hewitt, abetted by Tony Roche, has long embedded in Demon a love country and battling alongside, and for, your team-mates. Demon buys in and sticks.

So thrilled was de Minaur with his winning Davis Cup match against Bosnia and Herzegovina three years ago that he cemented his love affair with playing for his country by tattooing the numeral 109 (he is the 109th man to present Australia) on his chest.

“I don’t think many people expected me to get it. I have taken pride in it, it’s something special for me,” he said shortly after.

Despite his Spanish abode, de Minaur remains a full-on Aussie.

“I was born here and have always felt Australian and there is no greater honour than to represent my country,” he says.

In a sport of the increasingly tall – de Minaur, at a deceptive 183cm, is a tiddler against the 198cm of Marin Cilic and Karen Khachanov, men of a similar ranking.

Asking how he copes understandably grates.

“I definitely use my speed around the court to take the away and just be versatile,” he has said.

“I feel like every day is a different day and a different opponent, and you have to find a way … that’s something from little I have always had to learn because I was never the biggest or the strongest guy or the tallest.

“I have always had to find a way to win so that court craft has really helped me be the player that I am.”

“I really think I should be back higher in the rankings, so that’s a main goal, obviously, and hopefully I can just keep on pushing myself to get higher and higher.”