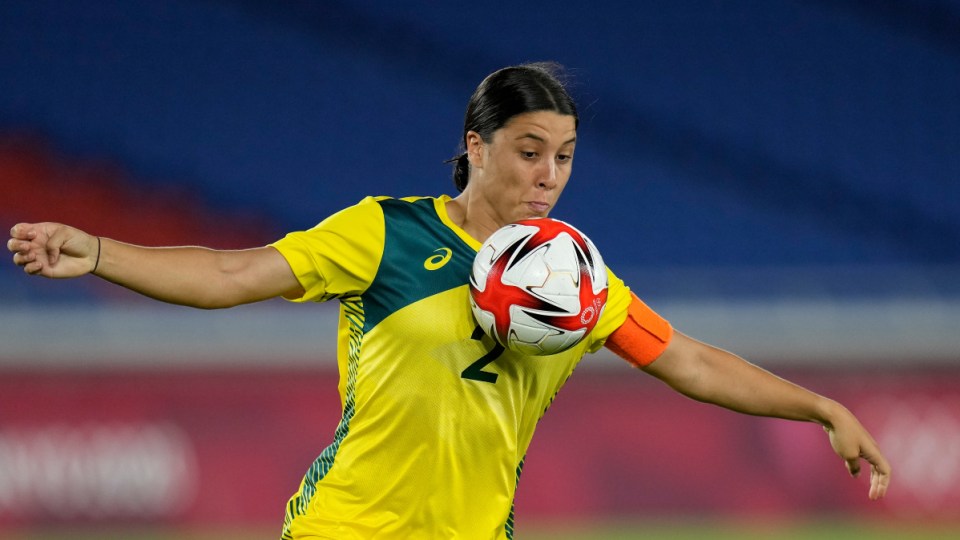 Sam Kerr has been voted runner-up for The Best FIFA Women's Playerof the Year award for 2021. Photo: AAP

Sam Kerr has been recognised for her brilliant 2021 campaign for club and country by being voted the second best women’s footballer on the planet at the Best FIFA Football Awards.

The Matildas captain and Chelsea striker was runner-up to Barcelona’s Spanish midfielder Alexia Putellas as the The Best FIFA Women’s Player of the Year.

Robert Lewandowski picked up The Best FIFA Men’s Player of the Year gong for the second successive campaign – this time ahead of Lionel Messi and Mohamed Salah.

Kerr’s goals for Australia and Chelsea at all levels of the game made the 28-year-old a standout contender, but Putellas pipped her to add the FIFA trophy to her Ballon d’Or victory.

Putellas captained Barca to the treble, which included its first Women’s Champions League title – defeating Kerr’s Blues in the final. Her teammate and fellow Spanish midfielder Jennifer Hermoso was third in the FIFA vote.

International captains, coaches and selected media vote for the top individual awards while there is also a fan voting element.

Kerr herself voted for Putellas, Norway’s Caroline Graham Hansen and Hermoso in the players’ category.

Kerr polled 38 points – 14 behind Putellas and five ahead of Hermoso.

Bizarrely, however, none of the top three made the cut in the FIFA FIFPRO Women’s World XI side – selected by thousands of professional players from all over the world, who vote for the best player in each position.

The XI did not include any players from Barcelona or Tokyo Olympics gold medallist Canada.

Bayern Munich’s Poland forward Lewandowski overturned the result last month of the Ballon d’Or where he placed second behind Messi, who finally led Argentina to a major senior title at the 2021 Copa America.

Lewandowski broke two Bundesliga records by scoring 41 goals for Bayern in their title-winning 2020-21 season and 43 in the calendar year of 2021. Both marks were held since 1972 by another Bayern great, Gerd Muller.

Cristiano Ronaldo was star guest at the awards, presented mainly as an online ceremony hosted at FIFA headquarters in Zurich, to collect a special prize for breaking the all-time scoring record in men’s internationals.

The best goalkeeper prizes were won by Edouard Mendy of Chelsea and Chile’s Christiane Endler, who moved from PSG to Lyon in the off-season.

The Puskas Award for best goal went to Erik Lamela for the rabona flick he scored for Tottenham against Arsenal in the Premier League in March.

Chelsea swept the coaching awards in a year when its men’s and women’s teams, led by Thomas Tuchel and Emma Hayes, reached their respective Champions League finals.