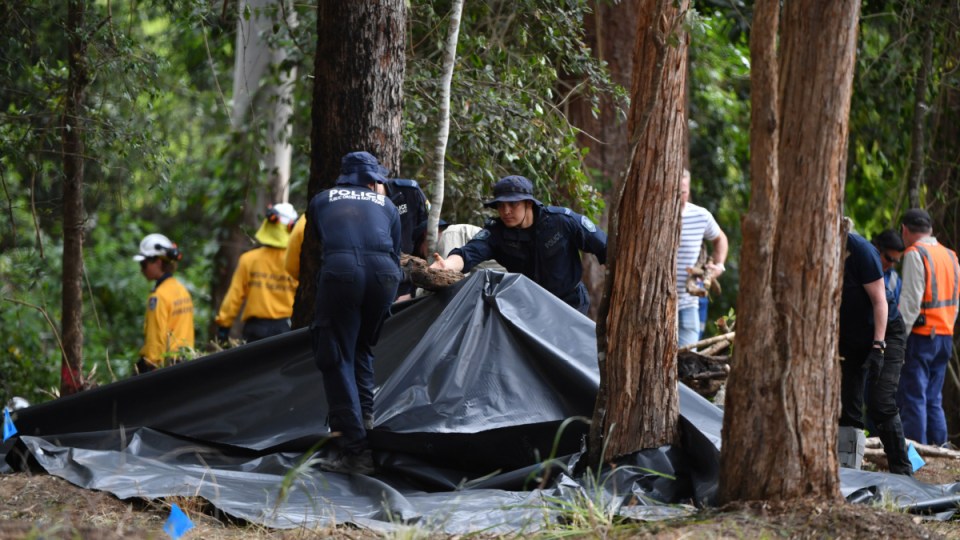 Police searching for the remains of William Tyrrell have reportedly discovered another piece of potential evidence – this time in an area they are yet to search.

Crews from the NSW RFS reportedly discovered another piece of fabric as they worked ahead of the main search team at Kendall, on the NSW mid-north coast on Tuesday, clearing bushland for a more detailed search.

It came on the eighth day of the search for William, who vanished from a property at Kendall in September 2014.

Network 10 reported Tuesday afternoon’s discovery of a piece of fabric found in the mud next to a creek bed.

Forensic archaeologist Tony Lowe and a police officer were seen photographing the item – a small piece of black cloth. It was then put into an evidence bag.

It is the 11th piece of material investigators have taken away for testing since the search began on Monday last week – and came after police confirmed yesterday they had also removed 15 tonnes of soil for testing.

On Tuesday, NSW Police Minister David Elliott told the Seven Network’s Sunrise that investigators wouldn’t be back in Kendall unless they thought there was something there that could help with the investigation.

“They wouldn’t be there unless they thought there were new and fresh leads,” he said.

“I think that is the expectation for the people of NSW, and for Australia, that police go to the nth degree and they don’t stop until they know that every opportunity of finding evidence is exhausted.”

He said police understood any evidence they found would have to be considered “through the prism of time” – the seven years since William disappeared from his foster grandmother’s home.

“As far as the commission is concerned in the conversations I have had with those on the ground, they are not going to stop and they will make sure that when they go to bed at night they are confident that they have done everything that is humanly possible,” he said.

In other developments in the case on Tuesday, assault charges against William’s foster parents were mentioned in a Sydney court.

The foster mother, 56, and foster father, 54, each face one count of common assault, alleged to have occurred at a home on Sydney’s upper north shore this year.

The charges do not relate to William.

The couple were not required to appear at Hornsby Local Court, which was told police served a “mini-brief” of evidence on Monday.

“I’ve not had a chance to give it to my client,” lawyer Sharon Ramsden said.

The identities of the foster parents and the child subject of the charge cannot be revealed for legal reasons.

Magistrate Robyn Denes said she understood the interest in the case but questioned the true desire to mention the defendants’ connection to William.

Aside from that link, the matter was not dissimilar to matters heard in every court in NSW, she said, saying media weren’t in her court last week for a case involving “far more serious allegation” and a five-year-old.

“What’s the interest besides, dare I say it, the clickbait issue?” she said.

Told the foster parents hadn’t been identified in reporting as per long-running court orders, Ms Denes said: “There were cameras at their house so the neighbours know.”

Ms Ramsden forecast she might apply to have the court closed for future hearings.

Ms Denes said she hoped the matter would progress ordinarily in her list, like 90 other AVO and 75 charge matters she heard on Tuesday.

The matter was adjourned until December 7 for pleas to be entered.

The foster parents are excused from appearing on that day if legally represented.