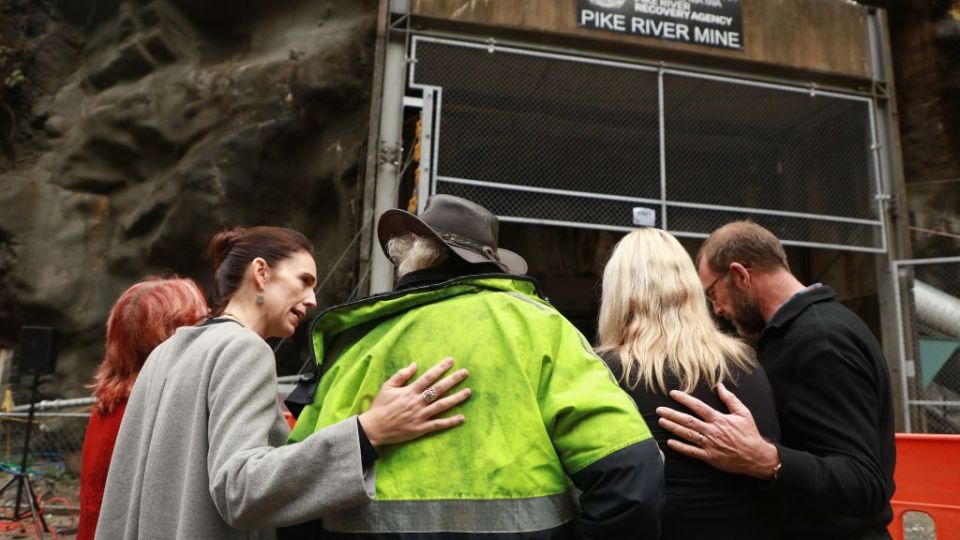 NZ PM Jacinda Ardern with grieving families outside the entrance to the Pike River mine in 2019. Photo: Getty

Human remains have been discovered for the first time at New Zealand’s Pike River mine site, more than a decade on from the disaster that killed 29 workers.

Police said remains of two, possibly three, men were captured in images late last week after boring efforts deep into the mine.

The explosion was NZ’s worst modern-day workplace accident, including the deaths of two Australians: Josh Ufer and William Joynson.

A scanner sent into the mine through boreholes at the top of the 2.2 kilometre drift produced the images.

Stand With Pike representative Anna Osborne, who lost her husband Milton in the blast, said it was “an incredibly emotional day for all of us”.

“Families have seen images from the borehole project and more will see them at a presentation tonight,” she said.

“What we’ve seen is starting to give real clarity about what happened down there.”

Police, who are working in the mine as part of a criminal investigation into the deaths, said a recovery operation would be too difficult.

Detective superintendent Peter Read said the images would not be released publicly but after 11 years underground, the quality of the remains were “what you might expect”.

“”It’s a really stark reminder of the pain, of the loss,” he said in Christchurch.

“The images have been reviewed by pathologists and taken from the furthest reaches of the mine.

“We’ve been unable to identify the remains, we’re working with forensic experts to see what we can do to confirm the identities.

“Based on the investigation that we’ve done to date, we know that there’s six to eight people that were working in that area.”

One of those eight men was Mr Ufer, according to images in the royal commission’s report.

Jacinda Ardern’s government was elected on a promise to recover the drift, which was sealed following the disaster.

As the $NZ51 million ($A49 million) operation drew to a close last year, Pike River Recovery Minister Andrew Little warned the possibility of finding traces of the men was remote.

He pledged to speak to the family representatives this week, some of whom want further explorations.

Mr Little said technical advice said recovery would be “just so far-fetched as to be impossible”.

“I know some families would have liked to have gone further but that hasn’t been possible,” he said.

“They’ve got a lot to digest. This will be a very emotional time.

“The families have been carrying this for some considerable time. Not just the disaster and the loss of their loved ones but … government departments and others led them to expect various things were going to be done that weren’t.”

A royal commission into the disaster found a disregard from management for workers’ welfare, and that improper methane management led to the explosion.

Human remains found at site of NZ mine disaster