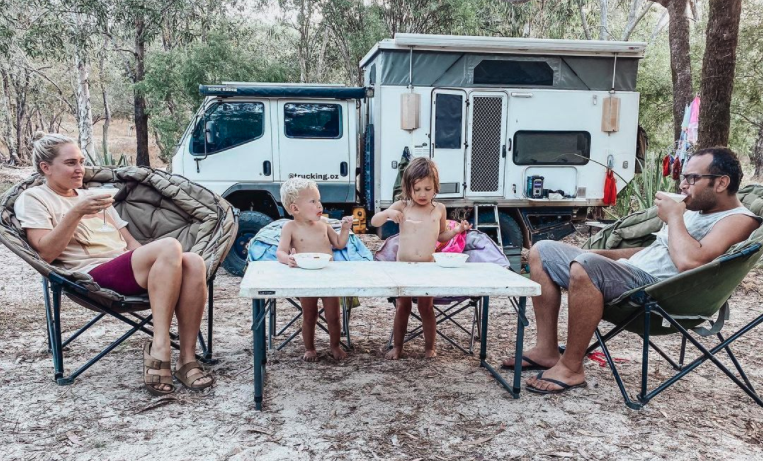 In happier times – the family at Cape York on their trip around Australia. Photo: Instagram

A police helicopter is on its way to the Simpson Desert in South Australia’s outback, where a Perth family of four has been stranded for days.

The Zavros family – Ori and Lindsey Zavros and their two young children Zoe and Zane – have been stuck in the desert since last Friday after their campervan became bogged due to heavy rain.

Roads near the scene, about 150 kilometres north of Oodnadatta, have been flooded and inaccessible and it was initially feared they might be stuck for weeks until the terrain dried out enough for them to drive out.

But, with temperatures in the area are expected to soar beyond 40 degrees in coming days, it was decided to send a South Australian police helicopter to rescue the group.

Mr Zavros’ mother, Theo Zavros, said the family had “had enough” of being stuck in the desert and having to conserve water ahead of forecast hot weather.

“We are thrilled — thrilled to bits — that they are going to be finally rescued,” she told ABC News after hearing the rescue was underway.

A pilot and a paramedic are on board the police helicopter. SA Police say the family is well.

“It is expected they will be flown out at some stage soon but we are unaware at this time as to where they will be taken,” a SAPOL spokesman said.

At the weekend, authorities used a rescue plane to drop off a satellite phone and essential supplies after the family activated an emergency beacon on Friday.

Oodnadatta Pink Roadhouse owner Peter Moore told the ABC that local police told him early on Tuesday that a retrieval operation was underway.

“The local police came this morning and said that drum of avgas we got dropped off here two days ago … is required for the chopper coming up from Adelaide,” he said.

“[It’s] landing here, refuelling, going into the desert to pick up the stranded family and then take them back down south.”

The police helicopter is expected to reach the family on Tuesday afternoon. They will be airlifted out, while their van will be left behind.

The Zavroses, who were heading back to Perth after a 12-month tour of Australia, shared a foreboding image on social media the day before they got bogged.

“Bring on the Simpson Desert”, the caption read.

Helicopter on way to rescue family stranded in Simpson Desert