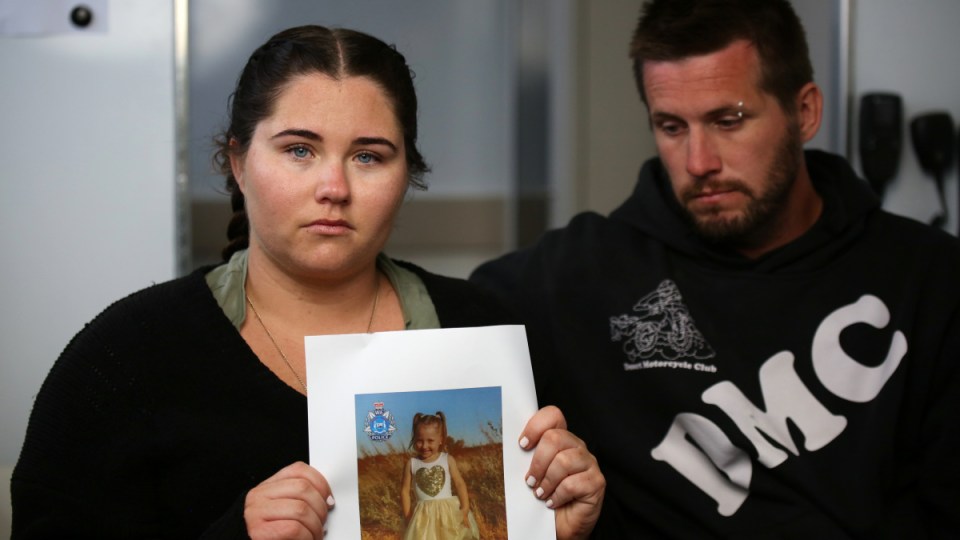 Cleo's mum Ellie Smith and stepfather Jake Gliddon have issued new pleas to find the little girl, who has now been missing more than a week. Photo: AAP

The stepfather of missing WA girl Cleo Smith has posted a plea to social media – his first public action since the four-year-old vanished from the family’s tent more than a week ago.

Jake Gliddon shared an image of the missing poster for Cleo – which offers a $1 million reward any information on her whereabouts – to his Instagram story on Monday.

It came just hours after Cleo’s mum, Ellie Smith, issued another heart-wrenching plea for help to find her missing daughter.

Ms Smith followed up with photos of Cleo with her baby sister Isla, saying “we all need her home” and asking “where are you baby”, before calling her “the best sister ever”.

The family pleas came after police urged people near the WA town of Carnarvon to check sheds and abandoned cars for any trace of Cleo.

Police are also searching for the driver of a car seen turning south off Blowholes Road, headed for Carnarvon, just after 3am on the morning Cleo vanished from the shared family tent at the remote campsite.

He said two people who were travelling together along the North West Coastal Highway early on October 16 say the car turn right off Blowholes Road between 3am and 3.30am.

“We want the person or persons who were in that vehicle to come forward and contact police,” Mr Wilde said.

“We want to know who they were and what they were doing.”

Mr Wilde stressed the driver was not a suspect.

“The priority for the investigation at this time is for everyone that was at the campsite during that morning to come forward to police,” Mr Blanch said.

“We need to speak to every single person that was there and we haven’t yet done so.”

Cleo was last seen by her parents about 1.30am last Saturday. Ms Smith said she woke about 6am to discover the little girl was missing.

Premier Mark McGowan said every resource had been directed into finding Cleo and he urged anyone with information to come forward.

“We all feel for her and her family and we just want to make sure that we find her as soon as we can, and that every, every effort is made to uncover her location so that the family can find out where she is,” Mr McGowan said on Sunday.

At the same press conference, Commissioner Chris Dawson said there was no information to suggest Cleo was not still in Western Australia.

“We do believe that someone knows something,” Mr Dawson said.

“Cleo just can’t simply disappear from that tent without a third party, another person or persons knowing.”

Elsewhere, a coastal community in Western Australia gathered at a vigil for Cleo on Sunday.

The Carnarvon Church of Christ held a vigil and encouraged people to write in a book of messages to be given to the missing four-year-old’s parents.

Mystery surrounds Prince Harry’s memoir as celebrations ramp up for Platinum Jubilee
Ben Simmons’ next move? Nobody at the Philly Sixers seems to know
Today's Stories