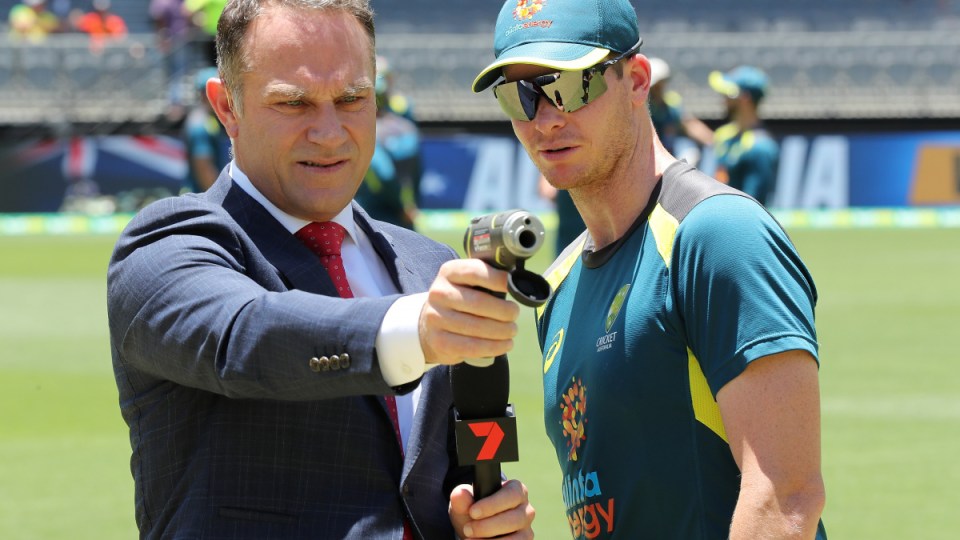 Slater (left) with cricketer Steve Smith ahead of the first Test in Perth in 2019. Photo: Getty

NSW Police have confirmed a 51-year-old man was arrested on Wednesday at a home in Manly on Sydney’s northern beaches.

He was taken to Manly Police Station and has not been charged.

The opening batsman played in 74 Tests for Australia scoring 5312 runs at an average of 42.83 after making his debut during the 1993 Ashes tour of England.

He also played 42 one-day internationals scoring just under 1000 runs before retiring from major cricket in 2004.

The arrest comes just two weeks after Slater was dropped from Channel Seven’s commentary team for the upcoming summer cricket season, only weeks ahead of the Ashes tour beginning.

He had previously worked as a commentator and personality for more than a decade on the rival Nine Network.

Seven blamed “budgetary reasons” for dropping Slater. But he said later he thought incendiary comments about Prime Minister Scott Morrison “could have had a link” to his departure.

In 2021, Slater travelled to India to commentate on the Indian Premier League competition and as the COVID-19 pandemic took hold, made controversial comments criticising Australia’s travel restrictions.

He accused Prime Minister Scott Morrison of “having blood on his hands” for failing to help stranded Australians.

As Cricket Australia worked out how to evacuate its Indian Premier League players and staff from India, amid the federal government’s travel ban, Slater challenged Mr Morrison to take his private jet to India and witness dead bodies on the street.

Earlier this month, he told News Corp’s Sunday Telegraph he regretted the remarks, but wouldn’t apologise.

Slater says he now regrets his comments about Morrison, but says he won’t apologise to Morrison.

“I didn’t want to be disrespectful,” he said of his public attack.

“I was highly emotional and people know I handle things differently.

“I was feeling completely overwhelmed.

“If I had my time again, bearing in mind it could have had a link to what’s just happened to me at Channel 7, no I wouldn’t do it again.”