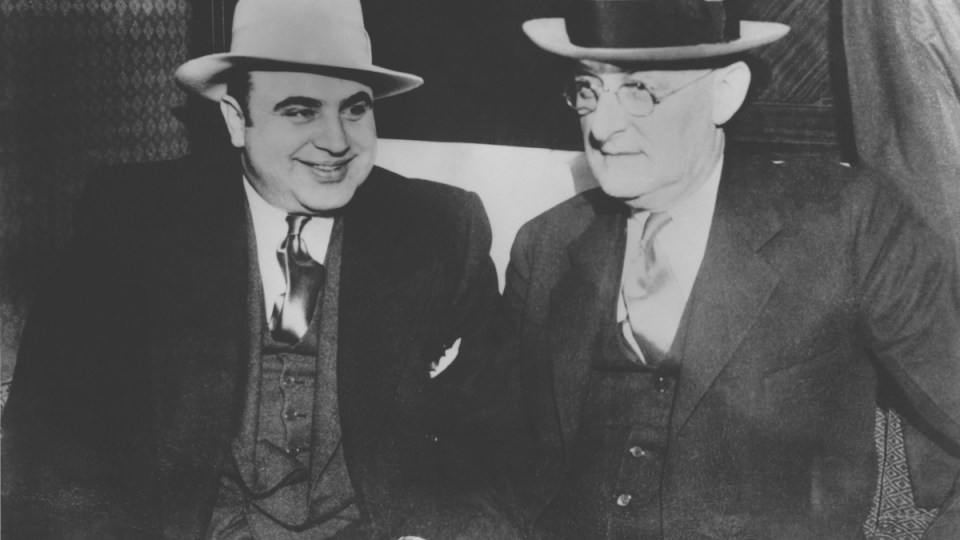 Al Capone (left) with US Marshall Laubenheimer in 1925. Photo: Getty

It was Christmas Day 1946 when notorious Chicago gangster Al Capone took his wife and four granddaughters out for a walk onto the dock of their sprawling mansion at Palm Island, Florida.

A picture shows ‘papa’, as he was known to them, relishing his freedom after being released from Alcatraz where he had served more than seven years for tax evasion.

That picture is among 174 items belonging to the Capone family that will go up for auction in Sacramento, California, on Friday (US time).

The items range from personal photographs to firearms to pocket watches and jewellery, as well as furniture and kitchen ware.

“The items that generate the most interest are the ones that you think of synonymous with a gangster figure like Al Capone, his guns and his fancy flamboyant jewellery,” said Brian Witherell, whose Witherell’s Auction House is handling the sales.

Diane Capone, 77, the second of Al Capone’s four granddaughters, said she hoped the items would reveal the human side of her grandfather, instead of the ruthless violence that plagued Chicago in the 1920s for which he has become infamous.

The item that most exemplified this, she said, was a personal letter Mr Capone wrote to his son, Sonny, from Alcatraz estimated to fetch between $US25,000 and $US50,000.

“It’s such a lovely letter, and it is a letter that conveys a side of this man that the vast majority of people have no idea of,” she said.

“These are not the words or the ideas of a man who is a ruthless gangster. These are the words of a loving father.”