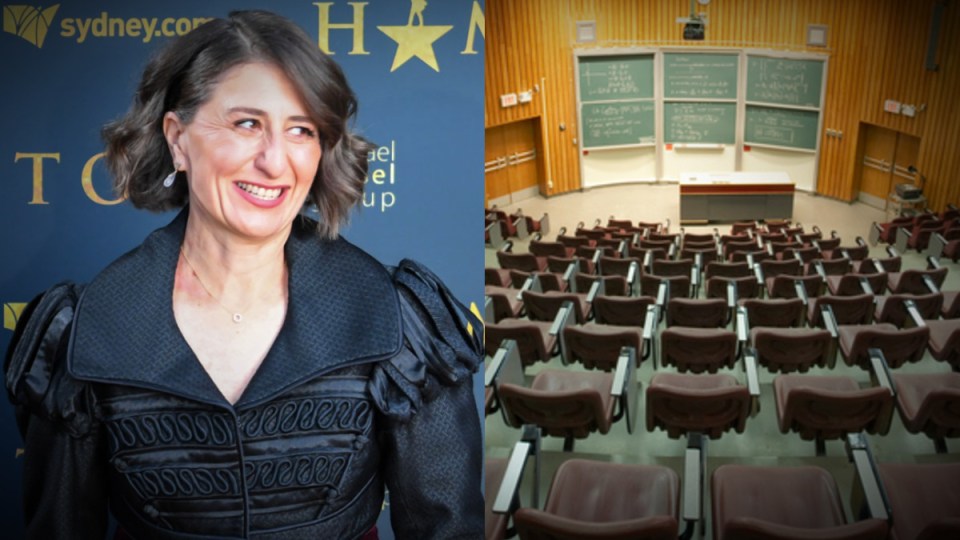 Last month, the musical Hamilton opened in Sydney, playing to full houses in the Lyric Theatre.

I love Hamilton, and I’m thrilled it’s playing in Australia.

But I also feel a sense of outrage. If 2000 people can gather in a theatre to watch a musical, why on earth can my son not go to classes at his uni?

Last year was a terrible year for us all, but final-year school students and first-year uni students were among the hardest hit.

My daughter was in her first year at UTS last year and had just six days of face-to-face classes before her course went online.

She should have been finding her tribe, attending labs, and developing independence. Instead, she was stuck at the kitchen table, staring at a screen, day after endless day.

Still, we were in a pandemic. There really was no choice.

This year, however, there is a choice.

Schools are open. Restaurants are open. Hamilton is playing, so why have so many university courses remained online?

My daughter, thankfully, is back on campus, but my son is not.

A fourth-year student at UNSW, he has just one 90-minute, in-person class a week.

Sitting in front of a computer alone at home is no life for a young person.

Sure, it’s fine for an adult to work from home when they have families, partnerships, and established social networks.

But young people often don’t have these sorts of networks. University is where they’re supposed to find them.

“Online learning is the most draining and half-hearted version of education to me,” says Cam, a first-year student from Melbourne.

“Time loses its meaning as we sit in front of our screens for hours on end, in the same spot all day. Trying to make connections with classmates and engage is a nightmare – everyone has their cameras off. Nobody ever contributes.”

Australia’s tertiary education regulator, the Tertiary Education Quality and Standards Agency, found that many students were dissatisfied with online learning during the pandemic and did not want to repeat the experience.

We laugh at the poor kids missing out on their university pub crawls, but really, it’s far more significant than that.

The university years are about meeting like-minded people, forming new connections, and beginning the transition to adulthood.

And yet, for so many students in 2021, the university experience has been whittled down to watching lectures on a computer.

As students are rarely required to turn on their cameras during tutorials, and even teachers can choose to keep their cameras switched off, classes can be – quite literally – faceless.

University should involve a robust exchange of ideas, where students can learn how to think critically and debate constructively.

Instead, says Cam, “learning is riddled with technical issues, distractions, a lack of meaningful discussions or questions, and an overall unenthusiastic air of nobody truly wanting to be there”.

This would be depressing and isolating for anyone, but it’s particularly damaging for vulnerable young adults, as Andrew Fuller, a Melbourne-based psychologist, confirms.

“The post-COVID wave of mental health backwash has been gigantic,” he tells me.

“This is especially true in the 19 to 20-year-old age group, as their rites of passage are flying right past them.”

The financial problems faced by universities in the absence of overseas students is well documented.

But the lecture halls are there, waiting to be used. Tutorial rooms sit vacant.

Meanwhile, our young people are stagnating, stuck at home in front of a screen instead of being on campus among their peers.

If we can go out to restaurants, our uni students should be attending face-to-face tutorials.

If we can go to see Hamilton, our uni students should be attending in-person lectures.

It’s time for unis to reopen fully, and let our young people move on with their lives.

Kerri Sackville is a writer and author based in Sydney

If crowds can sit for Hamilton, why can’t my son learn in a lecture theatre?