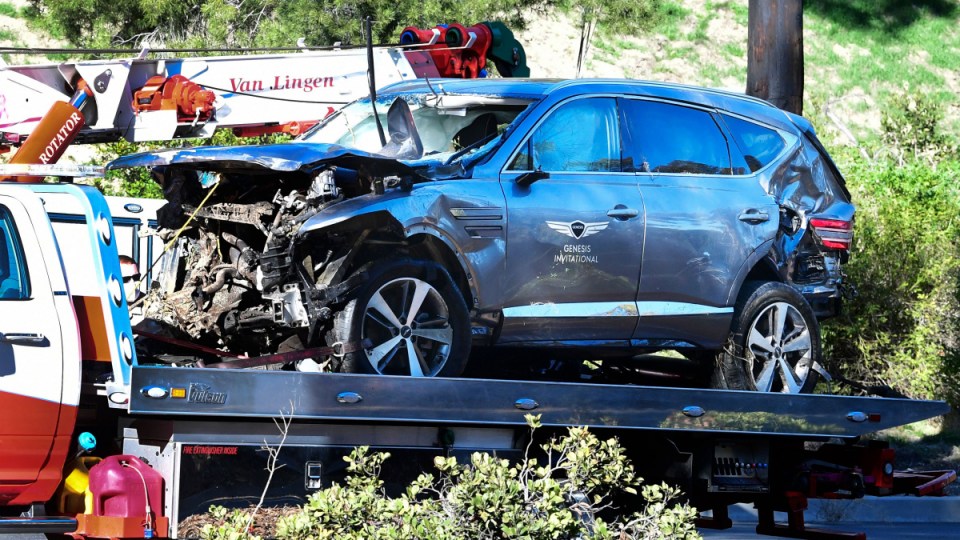 Golfing great Tiger Woods is lucky to be alive after a high-speed crash in the Los Angeles suburbs, according to authorities.

Woods reportedly suffered a shattered ankle and two leg fractures, one of them compound, when his four-wheel drive rolled from a steep road and ended up side down nearly 30 metres away on Tuesday morning (local time).

He survived “what would otherwise have been a fatal crash” because the interior of his vehicle remained intact, the Los Angeles County sheriff said.

Woods had surgery in the hours after the accident and remains in a serious but stable condition.

Authorities said there was no immediate evidence that Woods was impaired in the single-vehicle crash, but sheriff Alex Villanueva noted that the former world No.1 golfer appeared to have been travelling at a greater speed than normal.

There were no skid marks or signs of braking and he was not charged.

Police have not commented on reports that Woods had left his hotel in an “agitated and impatient” state minutes earlier after his vehicle was blocked in by another car.

A TV production crew member told celebrity website TMZ that “once the delay was over, Tiger ‘took off fast’ “.

A neighbour called emergency after Woods’ accident. Deputy Carlos Gonzalez of the Los Angeles Sheriff Department was first on the scene. He said the golfer was conscious but was “not able to stand under his own power” before being removed from the vehicle.

“I spoke to him. I asked him what his name was. He told me his name was Tiger, and at that moment, I immediately recognised him,” Deputy Gonzalez said.

He said Woods was wearing his seatbelt and was “calm and lucid”.

“I will say that it’s very fortunate that Mr Woods was able to come out of this alive, because this is an accident-prone stretch of road,” Deputy Gonzalez said.

Woods was alone in the SUV when it crashed shortly before 7.15am.

The two-lane road curves through upscale LA suburbs, and the northbound side that Woods was driving on descends steeply.

Weather was not a factor in the crash with the cause still being investigated.

Later in the day, LA police were photographing the scene, taking measurements and examining the wrecked 4WD before it was removed. The front end of the vehicle was heavily damaged and the windscreen frame had been removed so that Woods could be extracted.

News of the accident sent shockwaves through the sports world with the PGA Tour, Jack Nicklaus, whose record of 18 major titles has been one of Woods’ biggest goals, and athletes from Mike Tyson to Magic Johnson offering their best wishes and hopes of a quick recovery.

Woods was in Los Angeles as the tournament host of the Genesis Invitational at Riviera, where he presented the trophy, and was to spend Monday and Tuesday filming with Discovery-owned GOLFTV.

A 15-time major champion, Woods last played on December 20 in the PNC Championship with his 11-year-old son, Charlie.

He had a fifth surgery on his back, a microdiscectomy, two days before Christmas and gave no indication when he would return.

The Masters is April 8-11 and when asked if he would be there during the CBS telecast of the Genesis Invitational, Woods said, “God, I hope so.”

This is the third time Woods has been involved in a motor vehicle investigation.

The most notorious was the early morning after Thanksgiving in 2009, when his SUV ran over a fire hydrant and hit a tree.

That was the start of shocking revelations that he had been cheating on his wife with multiple women.

Woods lost major corporate sponsorship, went to a rehabilitation clinic in Mississippi and did not return to golf for five months.

In May 2017, Florida police found him asleep behind the wheel of a car parked awkwardly on the side of the road.

He was arrested on a DUI charge and said later he had an unexpected reaction to prescription medicine his back pain.

Woods later pleaded guilty to reckless driving and checked into a clinic to get help with prescription medication and a sleep disorder.

Tiger Woods ‘lucky to be alive’ after high-speed LA crash