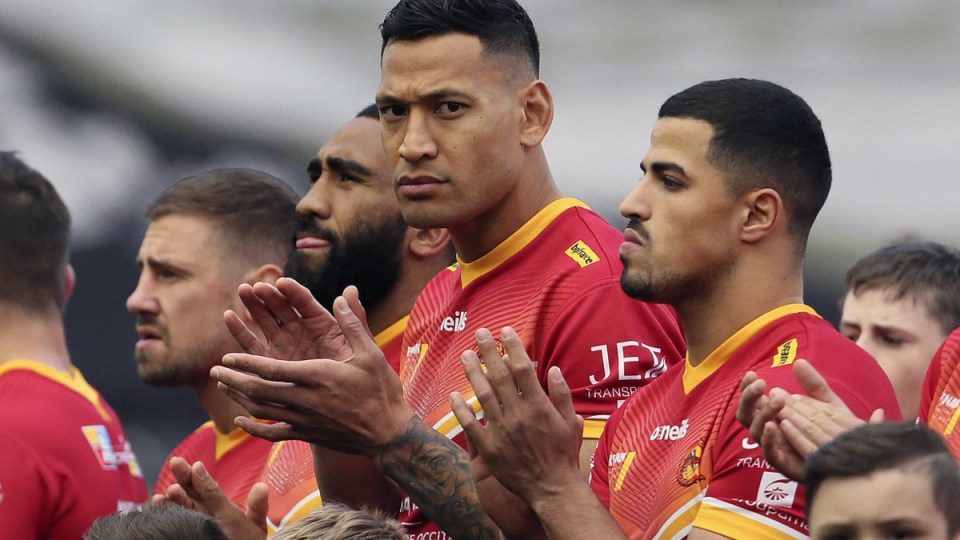 Folau lines up for the Catalan Dragons in March 2020. Photo: AAP

Controversial football star Israel Folau could be back playing NRL in 2021 after St George Illawarra has revealed it is pursuing the 31-year-old.

The Dragons confirmed they have contacted the NRL to have Folau join the club in 2021.

The NRL will consider the Dragons’ application to bring him back.

“There is a process of consideration underway involving numerous stakeholders, including the NRL,” a Dragons spokesman said.

The club has been talking to Folau since December, with new coach Anthony Griffin part of a push to sign the former star.

“Now we’re working with the NRL to allay any concerns on registering a contract for him.

“We understand there will be a range of opinions in regards to this decision, but we believe he would be a good addition to our club.”

The NRL said the application from the club included stipulations around Folau’s public and social media comments, with immediate termination proposed if he breached those conditions.

Folau was axed by Rugby Australia in 2019 after a series of homophobic social media posts and Australian Rugby League Commission chairman Peter V’landys said at the time that the code hopper’s comments were not in line with rugby league.

“The game is inclusive. Israel’s comments are not inclusive,” V’landys said in his first press conference as head of the ARLC in 2019.

“When I was a kid and kids used to get bashed up because they were different, I used to go and defend them. And a lot of them, it’s because their role models or their peers made them that way.

“I have no tolerance for people that put other people’s lives [at risk] or [commit] violence. It’s a big statement to make.

“With due respect to Israel, what he says, young kids listen to. He is a role model. They act on it.

“When you’re a kid at school and you get bashed up because you’re different, I don’t think that’s a good thing.”

V’landys’s predecessor, Peter Beattie, previously stated the NRL would block any bid for Folau to return to the game.

Folau played 91 NRL games with the Melbourne Storm and Brisbane Broncos from 2007 to 2010, also playing for Queensland and Australia, before leaving the code in to play for the fledgling GWS Giants in the AFL, en route to a more successful rugby union career.

Folau has been playing in the Super League with French club Catalans Dragons.

The 31-year-old devout Christian reached a confidential settlement with Rugby Australia in December 2019 after suing the code for religious discrimination over his sacking.

The Dragons start their NRL season against Cronulla on March 14.