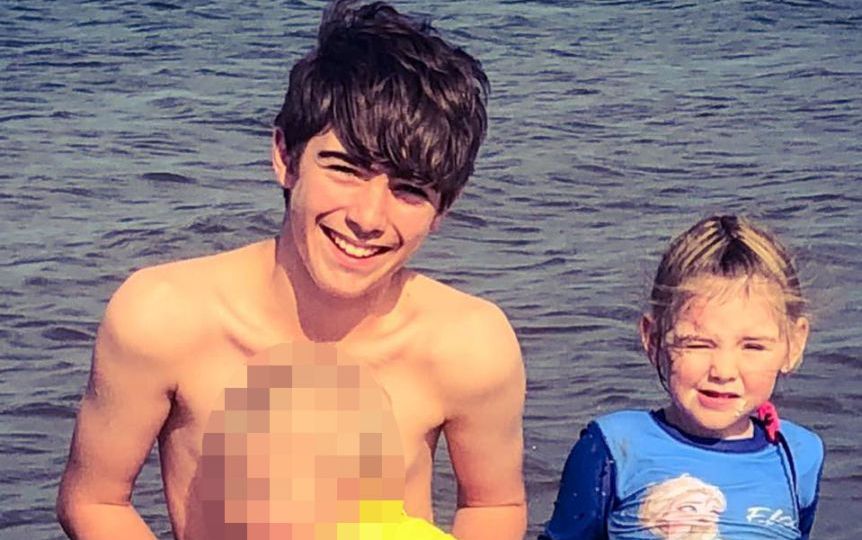 Leo, 13, and four-year-old Mia died at the scene. Photo: Facebook

A man and woman from Queensland’s Southern Downs have been identified as the couple involved in a car crash into a dam in the Scenic Rim that claimed the lives of two of their children.

Mel Martin, 33, and Dylan Wadley, 23, were travelling from Pimpama on the Gold Coast to their home in Pratten with their four children about 2pm on Sunday.

Their four-wheel drive vehicle broke through a road barrier at Wyaralong Dam, near Beaudesert, rolling down an embankment and flipping on its roof.

The couple were able to escape from the submerged car and helped remove their newborn daughter and their one-year-old son, but they struggled to open the doors to rescue the two older children, a boy aged 13 and a girl aged four.

Passers-by, including two doctors and an off-duty paramedic tried to help them, but four-year-old Mia and a 13-year-old Leo died at the scene.

The one-year-old boy was flown to the Queensland Children’s Hospital in Brisbane with critical injuries, and remains in a critical condition.

The five-week-old girl remains in the same hospital with no serious injuries.

Mr Hadley and Ms Martin were taken to hospital with non-life-threatening leg injuries and both underwent surgery on Monday.

Liz Turner posted a tribute to the “gorgeous children” on social media.

“My heart breaks for your mum and dad – so shattering.”

“Praying for your little brother and sister.”

Becky Smith, who also paid tribute to the children online, said her son went to school with Leo.

“My heart aches for his family. RIP Leo and Mia,” Ms Smith wrote.

Inspector Doug McDonald said an investigation into what caused the crash was still underway, but that police were “keeping an open mind”.

Police are considering whether Mr Wadley fell asleep at the wheel.

“There’s a number of people we need to talk to – there’s also the forensic aspect of it, looking at that particular scene, and also the vehicle that was involved,” he said.

Inspector McDonald said the crash happened on a stretch of road with a 100km/h limit.

“These high-speed crashes are always very dangerous,” he said.

“We see most of our fatalities around Queensland in the high-speed zones.

“Absolutely tragic for the family and friends – obviously the social network of that family group would be very wide.”