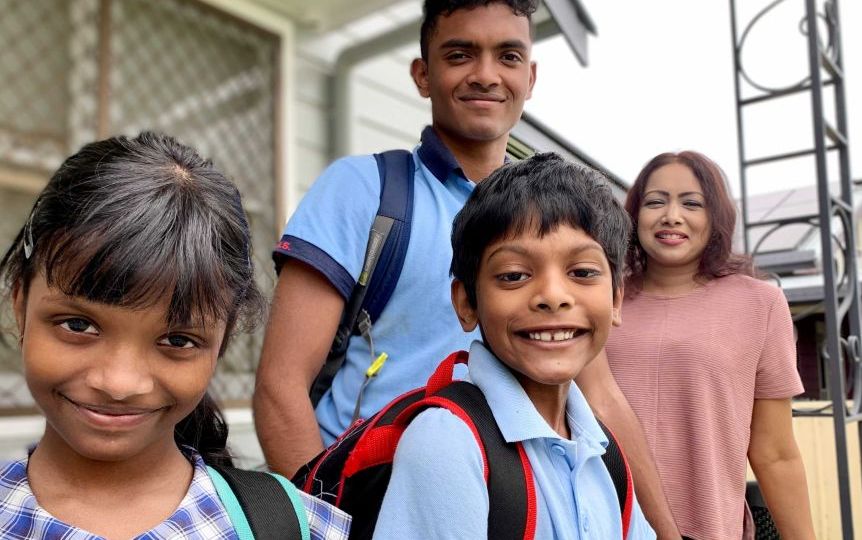 Jeniffer, Ruvish and Duane with their mother Florence. Photo: ABC

There is no case for a Sri Lankan family beloved by their NSW community to be deported.

That is what former immigration lawyer and federal MP Pat Conaghan has said as he pressures his government to let the Udawatta family, living in his electorate of Cowper, to stay.

The family is facing removal from the country after husband, father and primary visa-holder Raj died of bowel cancer the day after his 50th birthday in September.

“I am shocked. I can’t understand what is happening for us,” mother Florence Udawatta told the ABC’s 7.30.

“As a mother, I have to be strong. I can’t show my tears for my children because they are also going down when I am crying, so I want to be strong and tough.”

The family – oldest daughter Hirushi, 17-year-old Ruvish, eight-year-old Jeniffer 8 and seven-year-old Duane – has been an integral part of their church and school community since 2016, and are an immigration “success” story, locals told the ABC.

Ms Udawatta applied for temporary protection visas, but they were rejected less than a month after her husband died.

She has a month to appeal, or pack up her four children’s lives and leave the country.

Hirushi, who is training to become a chef, is now on a student visa and could remain in Australia, but she cannot bear the thought of saying goodbye.

“It is not my father’s fault he got cancer … we didn’t even get to finish grieving and we have to look for a reason to stop my family getting deported,” she said.

Nationals MP for Cowper Pat Conaghan said the family was part of the “Kempsey fabric” and their deportation must be stopped.

“Raj came and saw me earlier this year and advised me of the situation and I gave him my word that I would do everything possible if the worst case happened,” he told ABC’s Radio National.

“There is no case, in my opinion. There is no option, they must stay.”

Mr Conaghan said he had lobbied Acting Immigration Minister Alan Tudge on the family’s behalf, and was hopeful he would intervene on compassionate grounds.

“I’ve already spoken to Minister Tudge, and he’s certainly sympathetic to Florence, and the family’s plight.”

He denied his government had shown little compassion to families in similar cases in the past.

The Udawatta’s position is different to that of the Tamil family being held on Christmas Island after being deported from central Queensland, he said.

“The Biloela family was a completely different set of circumstances. The simple facts were that they had arrived here in Australia illegally, which is the polar opposite to the Udawatta family,” he said.

Mr Conaghan said the family had appealed the rejection of their protection visa, which will take between 12 and 18 months to consider.

The department said the family was unlikely to be persecuted in Sri Lanka and had a house in Colombo they could live in.

But the family argued their home — and community — was now in Kempsey.

“Raj was here on a valid visa, the family were doing everything to integrate to support themselves,” Mr Conaghan said.

“I know we’re a compassionate nation and I hope in the end that compassion comes through.”

On Friday, Mr Tudge expressed his “deepest sympathies” to the family. He told the ABC there were mechanisms to deal with such cases, but he could comment no further.