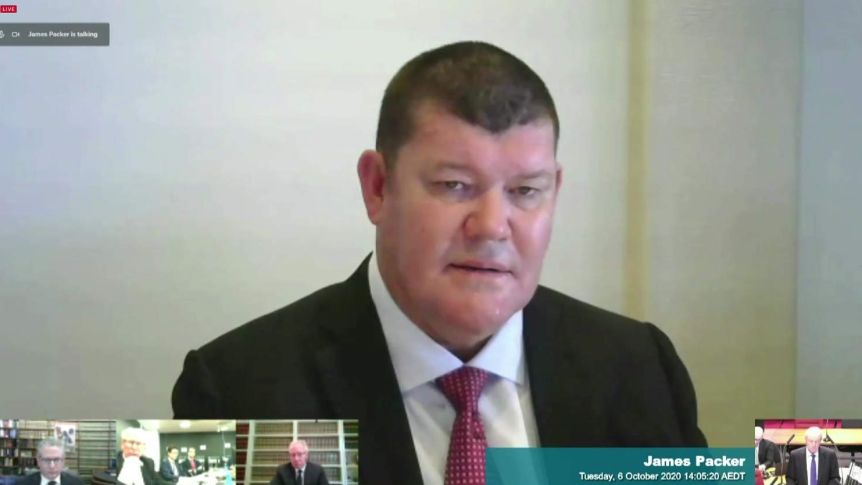 James Packer gave evidence to the Crown inquiry from his luxury yacht, moored in the South Pacific.

Billionaire James Packer has blamed Crown Resorts executives for corporate failures that led to the arrest of staff in China.

The 53-year-old made the claims as he appeared by video-link for a second day at an inquiry investigating Crown’s suitability to operate a new Sydney casino.

Nineteen Crown staff were arrested in October 2016 over claims they had illegally promoted gambling in China. In June 2015, South Korean casino workers had been arrested in China for similar offences.

Mr Packer stepped down as Crown’s executive chairman in August 2015.

He told the inquiry on Wednesday morning that he asked Crown chief executive Rowen Craigie and Robert Rankin, who was then chief executive of Mr Packer’s investment company Consolidated Press Holdings and later succeeded Mr Packer as Crown’s chair, to be “on top of the issue” of the risk of arbitrary action by Chinese authorities.

But Mr Packer repeatedly denied being told by either man about facts which might have raised alarm bells about the company’s China operations.

“I believe Mr Rankin and Mr Craigie let me down,” Mr Packer said.

He agreed the fact that the Crown board was not told the company’s staff in China were expressing fears for their safety was a failure of risk management processes.

Mr Packer said he accepted “not all, but some” responsibility for the corporate governance issues.

He denied the cause was a profit-obsessed corporate culture, but could not provide an alternative explanation.

“A lot of the things that I’ve seen or heard in this inquiry have been a total shock to me,” he said, describing himself as “incredibly upset” by the corporate culture the inquiry has exposed.

The casino mogul dialled in from his luxury yacht moored in the South Pacific, and occasionally appeared to face troubles with his internet connection. His answers to questions were mostly brief.

He faced questions about his character in Tuesday’s hearing, admitting to “disgraceful” conduct, which he blamed on a bipolar disorder for which he is now being treated.

The inquiry report is expected in early 2021.