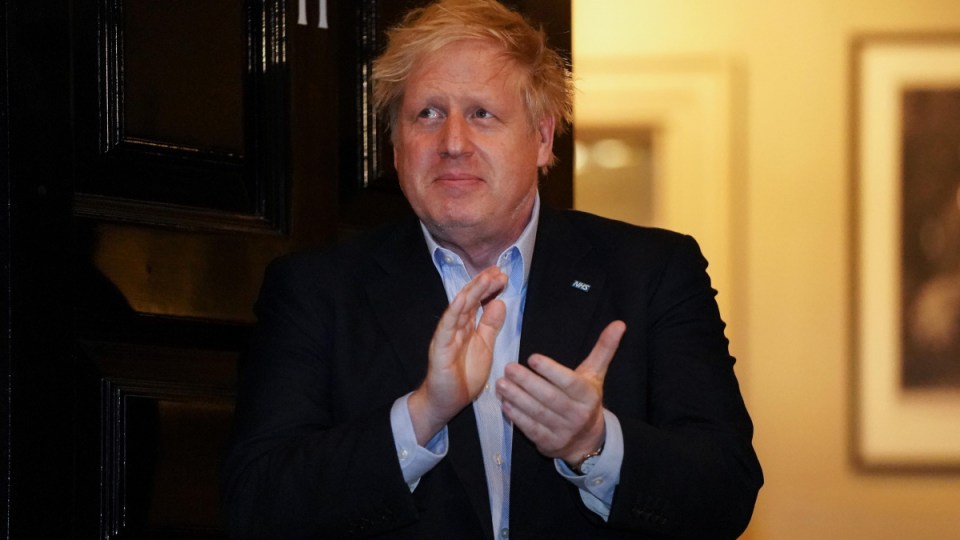 The UK PM outside Downing Street on April 2, during a nationwide Clap for Carers NHS initiative to applaud workers fighting the coronavirus pandemic. Photo: AAP

The news that British Prime Minister Boris Johnson is in intensive care with the coronavirus has stunned the world and brought messages of support from friend and foe alike.

Mr Johnson, 55, was admitted to St Thomas’ Hospital in central London – just a mile from his home and office at 10 Downing Street – late on Sunday.

He had suffered persistent coronavirus symptoms, including a high temperature, for more than 10 days.

His condition rapidly deteriorated over the next 24 hours, and he was moved to intensive care, where the most serious cases are treated. Although he has received oxygen, his office said Mr Johnson remains conscious.

Late on Tuesday afternoon (Australian time), two sources close to the British PM said there had been no change in his condition.

Mr Johnson is a controversial figure and his initial positive diagnosis attracted a level of schadenfreude from political opponents and those who questioned his initial slow response to the threat of pandemic.

Britain’s first coronavirus death came on March 5, just two days after Mr Johnson said he had visited a hospital and “shook hands with everybody”.

Indeed, the PM’s initial response to the escalating virus threat seemed to veer dangerously close to the now discredited notion of “herd immunity”. He warned the British public that “many families, many more families, are going to lose loved ones before their time”.

It took another two weeks that the government implemented social distancing and lockdown measures.

Britain has already recorded 52,279 cases of the coronavirus, 5385 people have died and 287 patients have recovered.

Now Mr Johnson is among them, in his own fight for life. His foreign minister, Dominic Raab, is deputising for him as Britain tackles the COVID-19 crisis and world leaders rally to offer support.

Usual opponents of Mr Johnson have also taken to social media to wish him the best, with many rejecting any suggestion that he should not be supported during his illness.

“The PM has asked Foreign Secretary Dominic Raab, who is the First Secretary of State, to deputise for him where necessary,” Downing Street said.

Just hours earlier, Mr Johnson’s office had said he was in good spirits and Mr Raab had told a news conference that the Prime Minister was still running the country.

Mr Johnson, who is expecting a child with partner Carrie Symonds, has had persistent coronavirus symptoms since testing positive for the infection on March 26.

Ms Symonds is unable to visit him because she is in isolation after also being confirmed to have the virus.

Mr Johnson had been in isolation in an apartment at Downing Street, and until Tuesday morning (Australian time) his office had insisted he was continuing work as usual.

Just hours later, the government released a less optimistic statement and confirmed that Mr Raab had been deputised to stand in for the PM.

Buckingham Palace said the Queen was being kept informed by Downing Street and US President Donald Trump said all Americans were praying for Mr Johnson’s recovery.

He said he had asked two pharmaceutical firms developing potential COVID-19 therapies to get in touch with the British government to offer their services.

“We’ve contacted all of Boris’ doctors and we’ll see what is going to take place,” he said.

“But they are ready to go.”

German Chancellor Angela Merkel wrote alongside a love heart and prayer emoji: “Get well soon Boris … I wish you a speedy recovery.”

“Thoughts and prayers with Boris, @carriesymonds and all their family. This is such a terrible virus that we all must take seriously,” wrote MP Ian Blackford.

“This must be so scary. I hope the government can now stop this pretence that all is fine and concentrate on getting him well and reassure the country,” MP Layla Moran wrote.

“Thinking of you, your family and all our UK friends at this tough time,” Mr Morrison said.

Thoughts turn to Boris Johnson the man, not PM, as health worsens