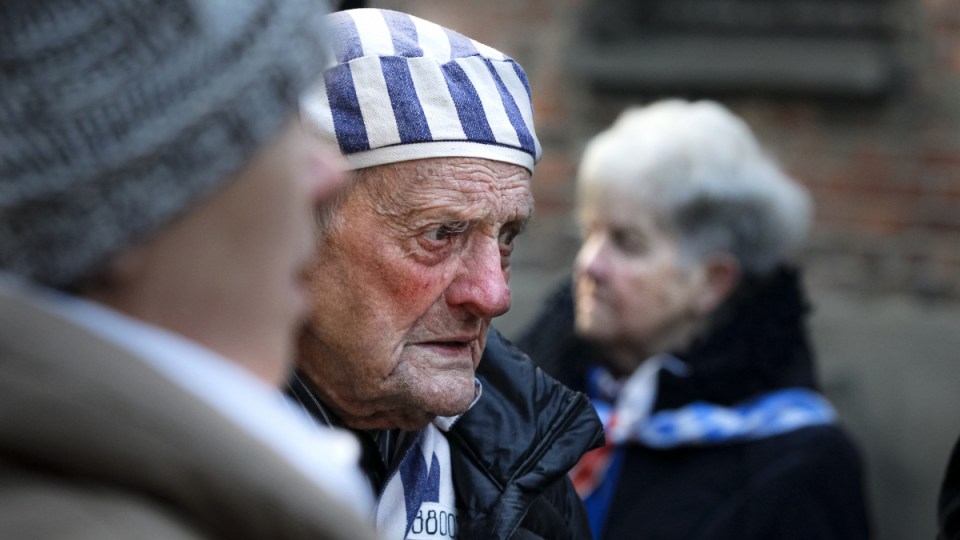 An Auschwitz survivor at the commemorations on Monday. Photo: AAP

Survivors of Auschwitz-Birkenau have prayed and wept as they returned to the World War II death camp to mark the 75th anniversary of its liberation.

About 200 survivors returned to the camp on Monday, many of them elderly Jews who had travelled from Australia, Israel, the US, Peru, Russia and Slovenia.

“We have with us the last living survivors, the last among those who saw the Holocaust with their own eyes,” Polish President Andrzej Duda told those at the commemoration, which included the German President and Jewish, Christian and Muslim leaders.

“The magnitude of the crime perpetrated in this place is terrifying, but we must not look away from it and we must never forget it,” Mr Duda said.

Many of those who returned on Monday lost parents and grandparents in Auschwitz or other Nazi death camps. They leant on children and grandchildren for support as they walked through the place where they had been brought in on cattle cars and suffered hunger, illness and near death.

They said they were there to remember, to share their histories with others, and to make a gesture of defiance toward those who had sought their destruction.

Most of the 1.1 million people murdered by the Nazi German forces were Jewish, but among those imprisoned at the death camps were also Poles and Russians. They were also remembered at Monday’s ceremony – where survivors warned about the renewed global growth of anti-Semitism.

World Jewish Congress president Ronald Lauder told the crowd that, after the war ended, when “the world finally saw pictures of gas chambers, nobody in their right mind wanted to be associated with the Nazis”.

“But now I see something I never thought I would see in my lifetime, the open and brazen spread of anti-Jewish hatred,” he said.

“Do not be silent. Do not be complacent. Do not let this ever happen again – to any people.”

Auschwitz is in southern Poland, in an area occupied by the Germans during the war. It was liberated by the Soviet army on January 27, 1945.

For some of the survivors, the camp is also the burial ground for their parents and grandparents.

“I have no graves to go to and I know my parents were murdered here and burned. So this is how I pay homage to them,” said Yvonne Engelman, a 92-year-old who came from Australia, joined by three more generations now scattered around the globe.

She recalled being brought in from a ghetto in Czechoslovakia by cattle car, being stripped of her clothes, shaved and put in a gas chamber. By some miracle, the gas chamber that day did not work, and she went on to survive slave labour and a death march.

A 96-year-old survivor, Jeanette Spiegel, was 20 when she was brought to Auschwitz, where she spent nine months. Today she lives in New York City and is fearful of rising anti-Semitic violence in the US.

“Young people should understand that nothing is for sure, that some terrible things can happen and they have to be very careful. And that, God forbid, what happened to the Jewish people then should never be repeated.”