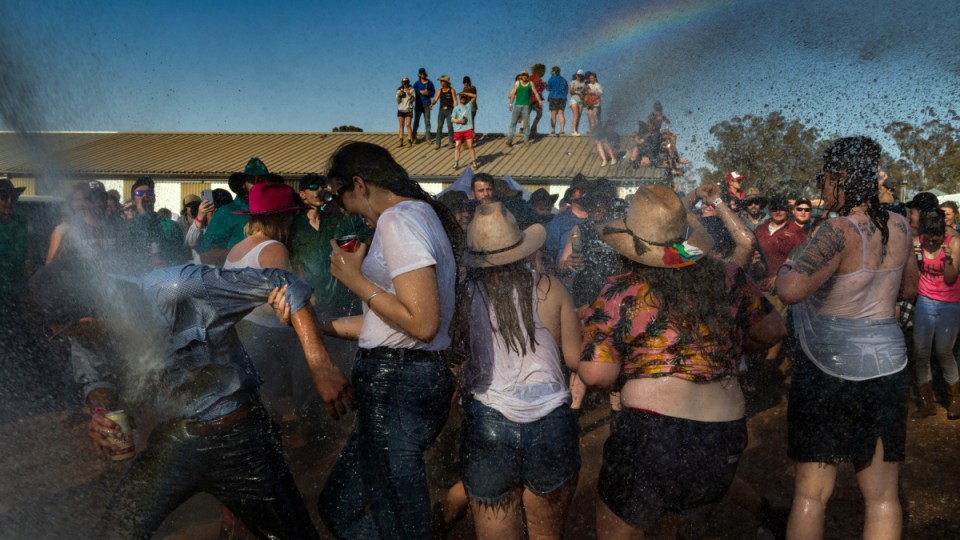 They called it a wet T-shirt contest, but there were no winners or losers. Not many shirts, either.

One man wore nothing but a tool belt, which no one seemed to mind even as the wettest and drunkest of the young and rural Australians – both women and men – tackled each other in the thick red mud, before arising for hugs.

Two hours later, they appeared transformed: Black ties for the men, dresses for the women.

The Ariah Park Bachelor and Spinster Ball had officially begun.

After all, 1500 people didn’t drive forever to this tiny town (population 493) just for giggles. They were searching for love.

“Yes, we’re here to meet people,” said Emme Williams, 22, a veterinary student who walked the fairgrounds in denim shorts with a few girlfriends before arriving at the ball wearing white.

“I prefer the ones that don’t yell at you. The ones who want to have a conversation.”

In cities, courtship has become efficient to excess.

Tinder and other apps can bring intimacy faster than food delivery.

But for people trying to meet and mate across Australia’s vast distances, it takes more planning and patience.

Bachelor and Spinster balls – or B&S balls, a fixture in the country since the 1880s with about 30 each year – aim to help.

And they are increasingly the catalyst for a matchmaking hybrid that combines the digital with the raw, communal and real.

The interaction starts online, with friends posting photos and descriptions of their friends in a singles Facebook group before each ball; Williams was featured scantily clad except for the wool of a freshly shorn sheep.

The lucky ones move on to flirting via Snapchat. 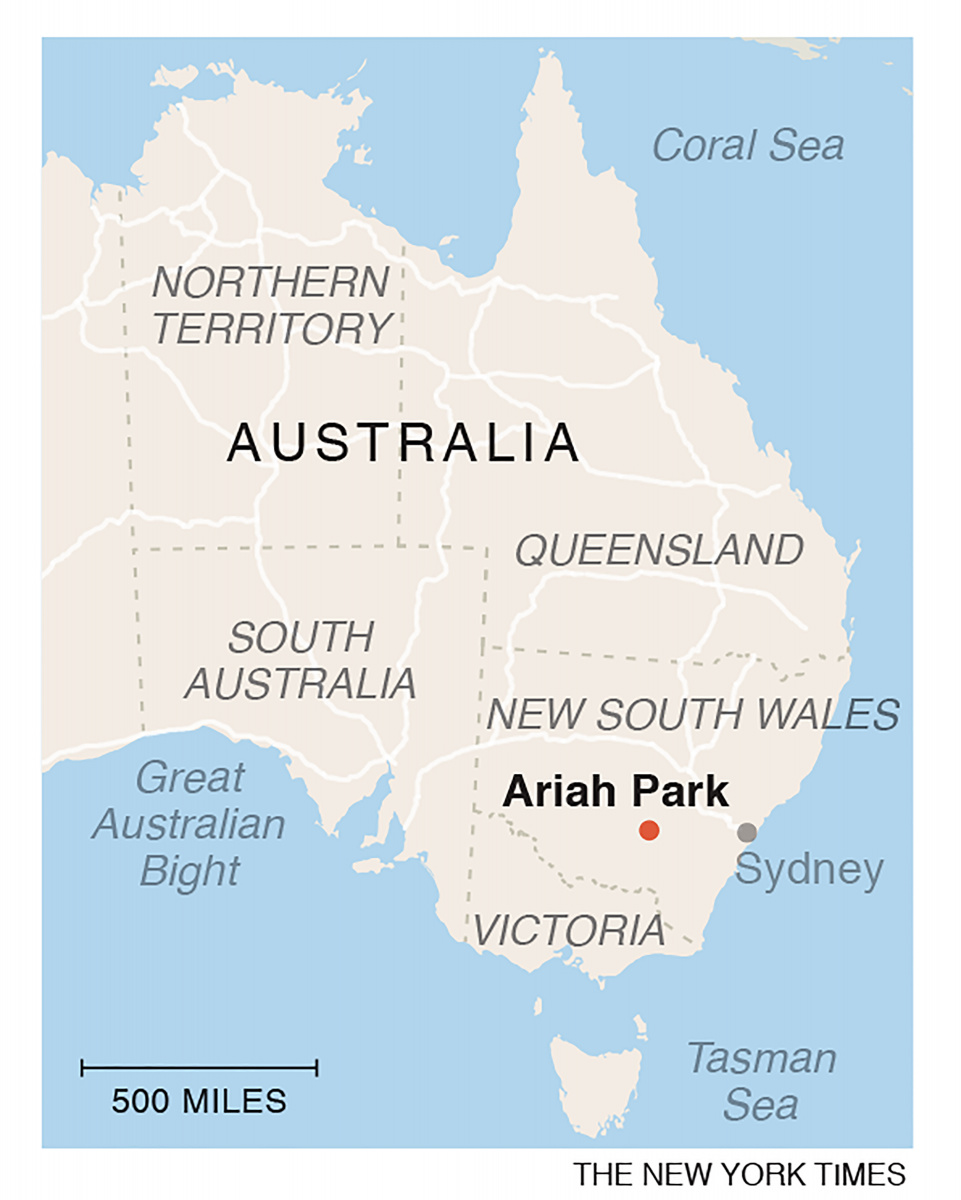 But then real-life socialising takes over.

All weekend at Ariah Park, which is about a five-hour drive west of Sydney, phones largely remained out of sight so eager was everyone for eye-to-eye contact.

“You’re limited to three single boys in your town, and you’re related to two of them,” said Ebony Worland, 25, one of the ball’s organisers.

“These were built for single women and men to find love in the country, really.”

Her own sister, Shelby Worland, 18, found a boyfriend at last year’s ball.

Selling tickets this year – about $100 for food, booze and live music, plus a goody bag that included a condom – she explained that her path to coupledom began when someone named Lleyton Neven, a friend of friends, started messaging her on Snapchat.

He lived about an hour away and after he arrived in Ariah Park on Friday, when most ball-goers show up, he found an excuse to seek her out.

“I didn’t know how to actually meet, so I said my phone was dead and I asked if she could charge it,” Neven said. “And now here we are!”

Wobbly with beer and affection, he kissed his beloved on the cheek. “One year together!”

Not all stories from the balls end so happily.

He’s the unofficial photographer of the B&S scene, a railroad worker with a shaved head and grey goatee who has been snapping pictures for no charge since 2009.

On his Akubra hat (made famous outside Australia by Crocodile Dundee), he carries cattle tags imprinted with the names and dates of B&S balls, along with others marking specific memories.

One commemorates a ball regular named Ezra who died at 19 in a car accident; another recalls a woman he knew from the balls who jumped to her death from a cliff with her two-year-old child.

“It’s hard finding love,” Rippy said, noting that his wife of 30 years was somewhere nearby.

But that’s why the balls matter, he added.

Along with the awkward singles, the free-flowing beer and the backfiring  utes, turned on and off to create fiery explosions called key bangs, there are people who connected at balls and come back to socialise.

“Who here is a couple?” Rippy yelled, meandering through the crowd.

Within a minute, Jess and Matt Chown emerged. He works on sheep farms; she works at an aged-care home for veterans.

“You know why I come? To do things I can’t do in church,” Matt Chown said.

Standing at least 6-foot-3 and wider than a tree cut for timber, he kicked a trash bin, making a loud clang.

Everyone laughed, including his wife.

Jess Chown, 30, noted that they were all part of a group, “the Rummed-up Rednecks,” that convenes on Facebook and at balls.

“It’s a way for us to let out our frustrations,” she said.

Nearby, Emme Williams, the veterinary student, scanned the crowd for a bachelor.

After a man offering her flowers moved on, one of her friends, Stephanie Papulia, 22, pointed to a guy in an expensive new vehicle.

“He’s got a LandCruiser and a mullet,” Papulia said. “Ticks both boxes.”

Williams pointed to another ute with large antennas. “The bigger the aerial,” she said, “the more he’s overcompensating”.

Most of the men at Ariah Park were more “chivalrous,” they said, than their behaviour might suggest.

But some of the balls in other towns have been dangerous.

In 2017, two men were convicted of raping a woman at a ball in another state.

Another man was sentenced to 18 months in prison last year for sexually assaulting two women at the Eel Skinners and Duck Pluckers B&S.

At the ball, held under the stars after dark, the main problem seemed to be food dye.

No one could explain why, but for years, attendees have felt compelled to spit dye onto each other.

The rules against bringing it in were generally ignored. Every few minutes, someone was hauled off after being caught with dye.

Glitter, though, was allowed. It floated in the breeze, destined to stay in mullets forever.

And as was the case all day, the ball itself captured the silly, lonely and romantic.

First comes Snapchat, then the Bachelor and Spinster ball