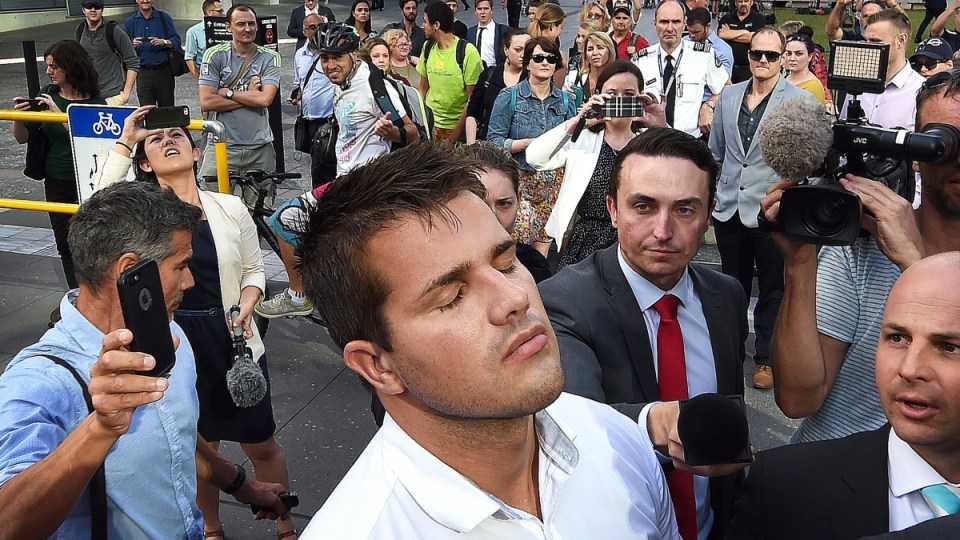 Gable Tostee leaves court after being found not guilty of murder or manslaughter. Photo: AAP

A man acquitted of murdering a woman he met on a Tinder date says he has “no ethical obligation” to reveal details of his past online, after a feminist group started a campaign to warn women about him.

In 2016, Gable Tostee was found not guilty of murder and manslaughter after Warriena Wright plunged 14 storeys from his Gold Coast apartment balcony, hours after they met for the first time.

Mr Tostee, who has legally changed his name to Eric Thomas, has begun using the Tinder dating app again to meet women under his new alias.

When Mr Tostee was in Melbourne last weekend, Facebook group Mad F—ing Witches posted screenshots from his Tinder profile along with a warning to its 61,000 followers, known as “witches”.

“He was acquitted of her murder, but we believe witches would want to know the identity of such a man before deciding to date him. And yes, Tostee met Wright on Tinder,” the post said, while also including the hashtags #DontDateEric and #StaySafe.

Mr Tostee said he planned to launch defamation action against people who had made disparaging comments about him on the Facebook page.

“I consider it to be, essentially, a hate/harassment campaign,” he told ABC Radio Melbourne’s Mornings program on Friday.

“I was acquitted in a court of law and they don’t know the facts.

“Ethically I should not be obliged to tell people I did nothing wrong.”

Mr Tostee said anyone who wanted to know about his background could do their own research online.

The founder of the Mad F—ing Witches group, Jennie Hill, said Mr Tostee was outed on its page for several reasons, including the incident with Ms Wright, because he had changed his name, and due to previous comments he had made about women online.

“One of the main things we do is expose men that we feel are making life worse for women by talking about them in those sorts of ways,” she said.

“We’re sure we didn’t defame him in any way in the post that we’ve put up.”

On Thursday, the Mad F—ing Witches group said it had received warnings from Facebook for breaches of the website’s community standards, and claimed it was the subject of a “troll attack”.

The same group was responsible for a campaign against Sydney radio host Alan Jones, and has lobbied advertisers to stop spending money at his station because of sexist remarks towards women.

In the years leading up to Ms Wright’s death, Mr Tostee frequented an online bodybuilding forum where he regularly boasted of sexual conquests and referred to women as “sloots”.

On Facebook last month, he wrote: “Why do so many girls sexually objectify themselves by posting a ton of half-naked pics then complain when they get treated like sexual objects? That’s like wearing a clown suit and complaining that nobody takes you seriously.”

Mr Tostee also admitted he had previously been banned from Gold Coast nightclubs, but argued: “They never gave me a reason”.

“The police have interviewed hundreds of women who have met me and nobody has had a single bad thing to say about me,” he said.

He said his decision to change his identity had been planned before Ms Wright’s death, because he considered the name Gable Tostee “weird”.

Monash University social media lecturer Dr Emily van der Nagel said it was impossible for someone like Mr Tostee to prevent details of his past being discovered online.

“This is deeply, if not permanently, linked to his name. If this has made news, even if the end result is this guy was acquitted, it’s still going to be the first thing that comes up,” she said.

“Women want to see men being held accountable for their actions, and sometimes it results in a disproportionate smearing campaign against one man.

“But I think you can really understand the underlying fear and risk culture that women tend to live in.”

‘I feel sad as hell’: Tostee on Wright’s death

Mr Tostee was thrust into the spotlight during the investigation into Ms Wright’s death in September 2014, which led to Queensland police charging him with murder, even though he was not on the balcony when the fatal fall occurred.

After matching on Tinder, the pair met in Surfers Paradise and ended up in Mr Tostee’s apartment.

The Supreme Court heard they were drunk and began fighting, leading to Mr Tostee locking Ms Wright out on the balcony.

Prosecutors unsuccessfully argued that Ms Wright was so afraid for her safety that the only rational choice she could make was to perform the risky manoeuvre to lower herself to the level below.

The court heard she slipped and fell to her death, but Mr Tostee did not ring triple-0, and fled the apartment complex before handing himself into police hours later.

The entire incident was captured on an audio recording on Mr Tostee’s phone.

As part of his bail conditions, Mr Tostee was banned from using the Tinder app. That restriction was lifted when he was found not guilty.

Five years on from Ms Wright’s death, Mr Tostee said he continued to be haunted by what happened.

“I feel sad as hell. It was absolutely traumatic. Nobody should lose their life in a situation like that,” he said.

“It was the worst night of my entire life.”