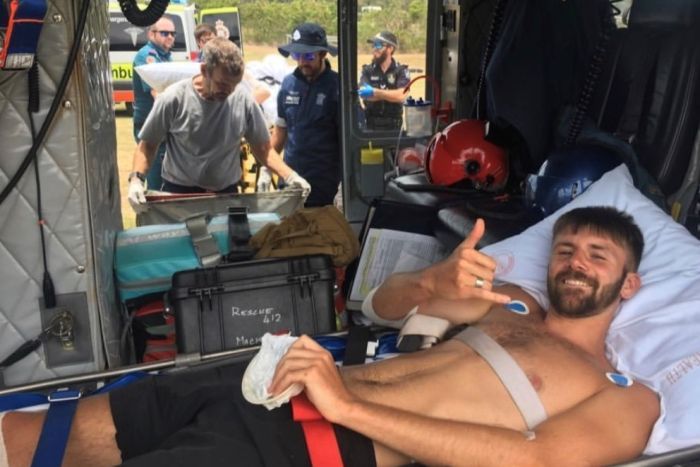 Paramedics said both Danny Maggs (pictured) and Alistair Raddon were in good spirits on the way to Mackay Base Hospital. Photo: Instagram

After British tourist Alistair Raddon lost his foot in a north Queensland shark attack, he told one of his rescuers he initially thought it was his friend grabbing him on the leg.

His friend, Danny Maggs, 22, was also mauled by the shark, which attacked them while they were snorkelling in Hook Passage in the Whitsundays on Tuesday morning.

CQ Rescue Helicopter Service crewman Grant Bollington, who was in the chopper that airlifted the men to Mackay, told the ABC that Mr Raddon, 28, said they were travelling together and were playfighting in the water when the shark attacked.

“He basically said they were wrestling in the water at the time and he thought his mate grabbed him by the leg really hard, turned around and saw there was blood in the water and realised he was getting bitten by a shark,” Mr Bollington said.

He said the Englishmen were in relatively good spirits while they were in the chopper.

“When we were loading the gentlemen into the chopper, it might have all been coming to the gentleman who lost his foot of what actually happened and it was obvious when we landed his spirits picked back up again.”

CQ Rescue doctor Sanjeev Grewal said first aid delivered to the pair while they were travelling back to shore was crucial.

“There was, I think, a Belgian paramedic on the boat as a tourist and they applied first aid.”

“[They] did a great job … it’s of primary importance to stop the bleeding because that’s what’s ultimately going to kill the patient.”

Too hard to install drum lines

Drum lines used to kill sharks have been removed from the Great Barrier Reef Marine Park since September, when the Queensland government lost a challenge in the Federal Court to continue its culling program in the protected area.

Responding to Tuesday’s attacks, Queensland Fisheries Minister Mark Furner said it would be nearly impossible to have a shark control program in the Whitsundays.

“There has never been a shark control program in operation in the Whitsundays,” he said.

“The only time, last year in September, was a short trial of seven days in the Cid Harbour area following the fatality and the two attacks in that location.”