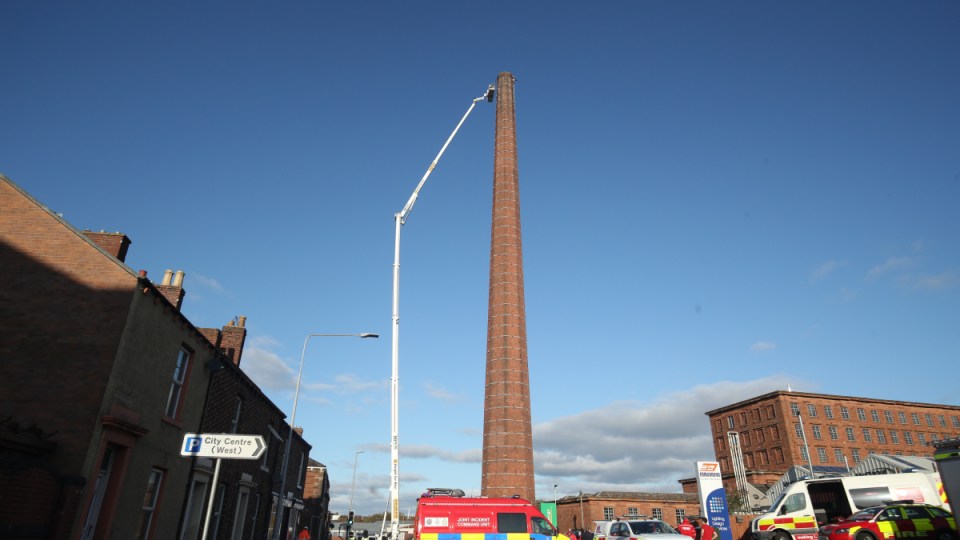 Rescuers used a scissor lift to try to reach the man at the top of Dixons Chimney. Photo: AAP

A man has died after being stuck upside down for hours at the top of a 90-metre former mill chimney in Britain.

An earlier rescue attempt with a helicopter had failed, and police said there had been no contact with the man for “some hours” before a specialist team used a cherry picker to reach him.

Emergency services had been called to Dixons Chimney, a local landmark in Carlisle, early on Monday morning (local time) – by which time the man had reportedly been hanging upside down at the top of the chimney for 14 or 15 hours.

The body of the local man, in his 50s, was brought down from the chimney with help from a specialist Scottish rescue team late on Monday afternoon.

Cumbria Police confirmed he was pronounced dead at the scene.

A spokesman said police knew the man’s identity and specialist officers were supporting his family. There will be an investigation into how and why the man reached the top of the chimney, police said.

Dixons chimney – Our thoughts and thoughts of all emergency services and partners are with the family. pic.twitter.com/nNC9RQtTP8

Police described the rescue effort as “highly complex”, and said it included using drones to assess the scene.

Specialist firefighters, who are trained to work at height, eventually lowered the man down from the chimney.

Roads around Dixons Chimney, which is aprominent historic landmark built in 1836, were closed during the rescue operation.