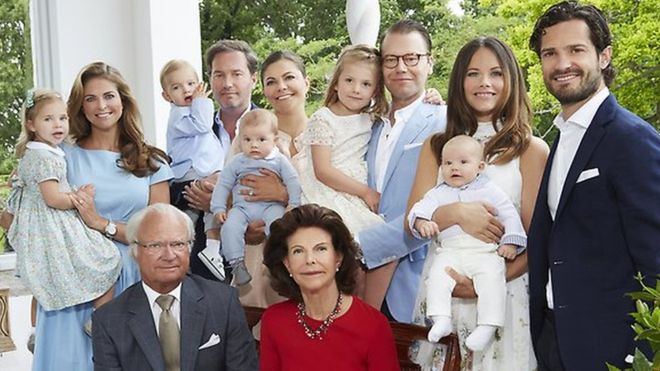 The Swedish royal family has been dramatically trimmed, with five of the current king’s grandchildren removed from the royal house.

King Carl XVI Gustaf’s decision, announced on Monday (local time) means the children will no longer have the title of royal highness and will not be expected to perform official royal duties. Nor will they receive any taxpayer funds.

The five affected grandchildren, who are aged between one and five, are Leonore, Nicolas and Adrienne (the son and daughters of Princess Madeleine and her British-American husband Christopher O’Neill) and Alexander and Gabriel (the sons of Prince Carl Philip and his wife, Princess Sofia).

The only two children not affected are Princess Estelle and her younger brother, Prince Oscar. They are the son and daughter of Crown Princess Victoria, who is the king’s direct heir, and are in direct line to the throne.

The move does not affect the positions of the children’s parents. Princess Madeleine, Prince Carl Philip and his wife Princess Sofia “will continue their work in the non-profit foundations and organisations which they have founded or in which they are involved. In addition, they will perform official duties to the extent decided by His Majesty,” the official statement said.

A post shared by Princess Madeleine of Sweden (@princess_madeleine_of_sweden) on Oct 7, 2019 at 5:59am PDT

In a post on Instagram, Princess Madeleine said the change had been “planned for a long time”. It would give her children a “greater opportunity to shape their own lives as private individuals”, she said.

Prince Carl Philip also posted his reaction to Instagram, saying the change would give his sons, Prince Alexander and Prince Gabriel, “freer choices in life”.

Experts say the move reflects a wider view in Sweden that there is no need to pay so many members of the royal family for official duties.

“Parliament announced a few years ago that it would have a review of some principles regarding the monarchy. One thing was the size of the family,” royal expert Roger Lundgren told the BBC.

He said the king had moved on his own to deal with the issue, comparing it to reports that Prince Charles wants to “streamline” the British royal family.

Mr Lundgren also likened the new roles the grandchildren were likely to have to that of princesses Beatrice and Eugenie, who don’t perform official royal duties for Britain.