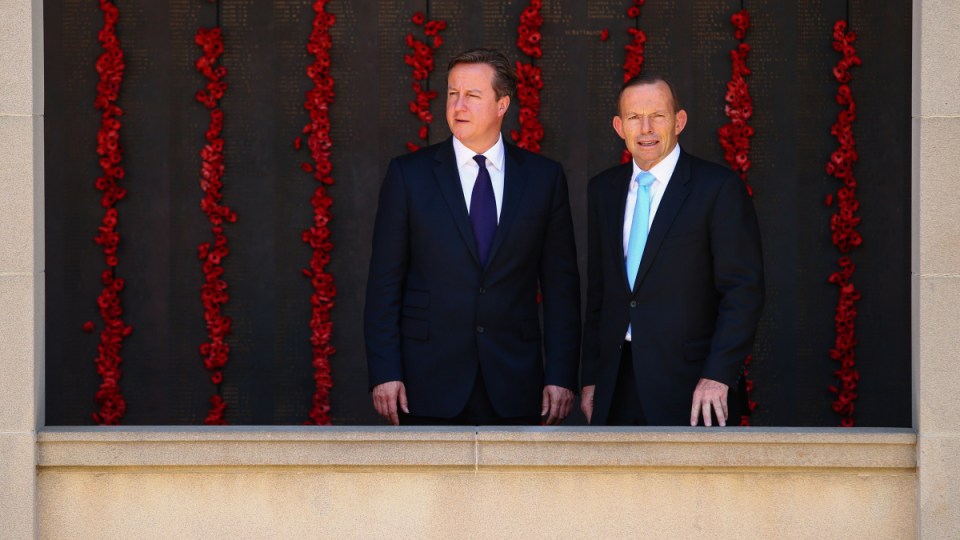 Mr Abbott at the war memorial with then British PM David Cameron in 2014. Photo: Getty

Former prime minister Tony Abbott is joining the board of the Australian War Memorial, his first official appointment since leaving politics.

He will replace author, historian and newspaper editor Les Carlyon, who died in March.

Veterans Affairs Minister Darren Chester said Mr Abbott would bring dedication, passion and knowledge with him as the memorial undergoes a $500 million upgrade.

He said Mr Abbott had extensive experience and would ensure the stories from recent military conflicts in Afghanistan, Iraq, the Solomon Islands and East Timor would be proudly told.

“As prime minister, Mr Abbott led the case to build the Sir John Monash Centre in Villers-Bretonneux to tell the stories and honour the thousands of fallen Australians who served in the First World War,” Mr Chester said.

“I congratulate Mr Abbott on his appointment and am confident he will ensure we continue to record the stories of those who have served, in their words, and be able to share those stories to the more than one million visitors to the memorial each year.”

Meanwhile, a search is under way to find a replacement for Brendan Nelson, who will step down as director of the memorial when his term ends at the end of this year.