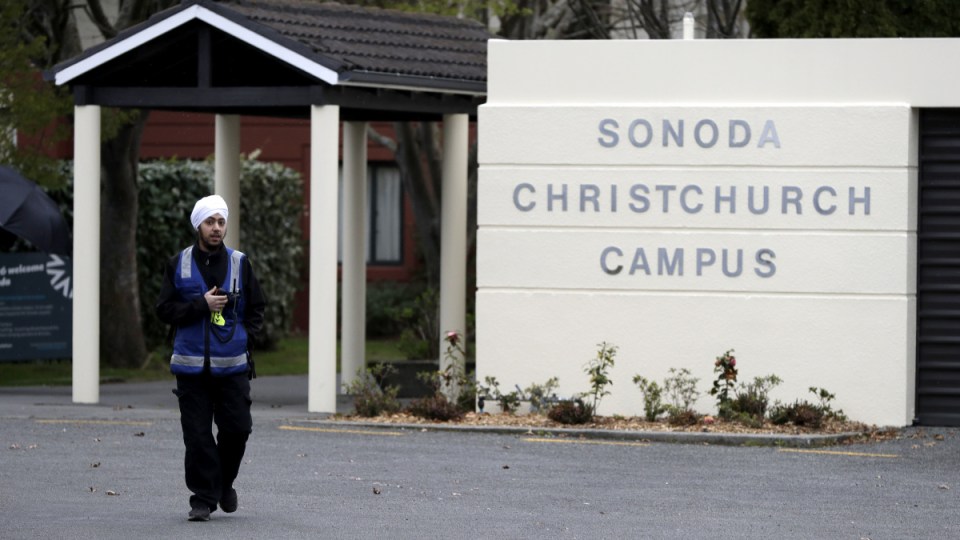 A security guard at Canterbury University's Sonoda campus, where the dead student was found. Photo: AAP

New Zealand’s education minister has called for an investigation after reports a student’s body lay undiscovered in a room for nearly eight weeks at a university dormitory run by an Australian company.

Authorities have released few details of the incident at the University of Canterbury in Christchurch, where the male student’s body was finally found on Monday.

But news website Stuff has reported that the student’s body lay undiscovered in his room for almost two months before other students noticed a smell.

One of the student’s friends told the website the man’s stepfather had contacted other friends last weekend, concerned he had not heard from his son.

“He contacted my friends first to try to reach him and, when they couldn’t, he told us he would call the police,” the friend said.

The friend said the dead student was a “good and confident guy”, who would sometimes “go off the grid for a week or so”.

The dorm is run by Australian company Campus Living Villages, which also operates dorms in the US and Britain. The company said it was saddened by the death but wouldn’t comment on the circumstances after the student’s family requested privacy.

New Zealand Education Minister Chris Hipkins said it was a horrific situation for the student’s family and nobody should be left in a dorm room for so long.

“If you’re going into a hall of residence or a hostel, you are paying top dollar for not just a roof over your head but also the pastoral care that goes with that,” Mr Hipkins said.

“I think clearly that’s not been present in this case.”

He said the university needs to conduct a thorough investigation.

“We’ll be looking very closely at the regulatory and legal arrangements around the halls of residence and hostels to make sure they are as strong as they need to be,” he said.

“But clearly I’m really concerned about this case.”

University vice-chancellor Cheryl de la Rey said it was “inconceivable to imagine how these circumstances could have occurred.”

She said the university had an extensive wellbeing program and that residential assistants also supported students in dorms. The university would commission an independent investigation, she said.

Police said they were finishing up a scene examination on Wednesday, and an autopsy had been conducted on Tuesday.

Police declined to identify the student, say how long he’d been missing or specify how he died. They reportedly had to call in a disaster victim identification team to confirm his identity through fingerprints, DNA and dental records.

Student President Sam Brosnahan said the incident was distressing for other students, who were saddened to hear of the death of one of their own.