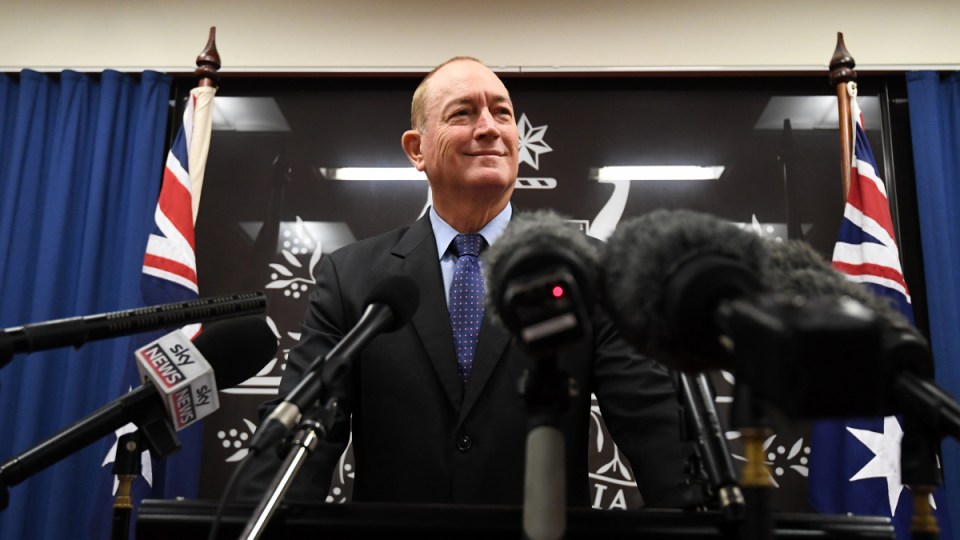 Then senator Fraser Anning at a media conference in May.

Former senator Fraser Anning faces a bankruptcy hearing in the Federal Court in Adelaide on Tuesday – but it appears he is unlikely turn up.

Bendigo Bank has brought bankruptcy proceedings against Mr Anning, and the first part of the case is due to be heard on Tuesday.

The ABC reports that Mr Anning, who is overseas, will not return to Australia to face the proceedings.

Mr Anning, who is not required to attend the hearing, did not respond to emailed questions about whether he intends to fight the bank’s efforts to put him into bankruptcy.

The ABC revealed in August that Mr Anning has been staying with family in the US after losing his seat in May’s federal election. Mr Anning’s two daughters live in the US.

If Mr Anning does not appear in court on Tuesday, Bendigo Bank will be able to proceed to the next stage of pushing him into bankruptcy so it can recover its debt.

Bendigo Bank’s subsidiary, ABL Nominees, is chasing $185,000 that is understood to relate to Mr Anning’s investment in a failed agribusiness scheme.

But even if the bank succeeds in pushing Mr Anning into bankruptcy, it is unclear what assets it will be able to sell to recoup its money.

It is the second time the bank has brought bankruptcy proceedings against the controversial former senator.

Mr Anning reportedly settled the first case in October 2017, a month before he entered Parliament to replace a disqualified One Nation senator.

Section 44 of the constitution prohibits undischarged bankrupts from sitting in parliament.

He later defected from One Nation, first joining Katter’s Australian Party before sitting as an independent.

Before May’s federal election, he launched Fraser Anning’s Conservative National Party, running dozens of candidates in seats around the country.

None of the candidates were elected and Mr Anning failed to win back his Queensland Senate seat.