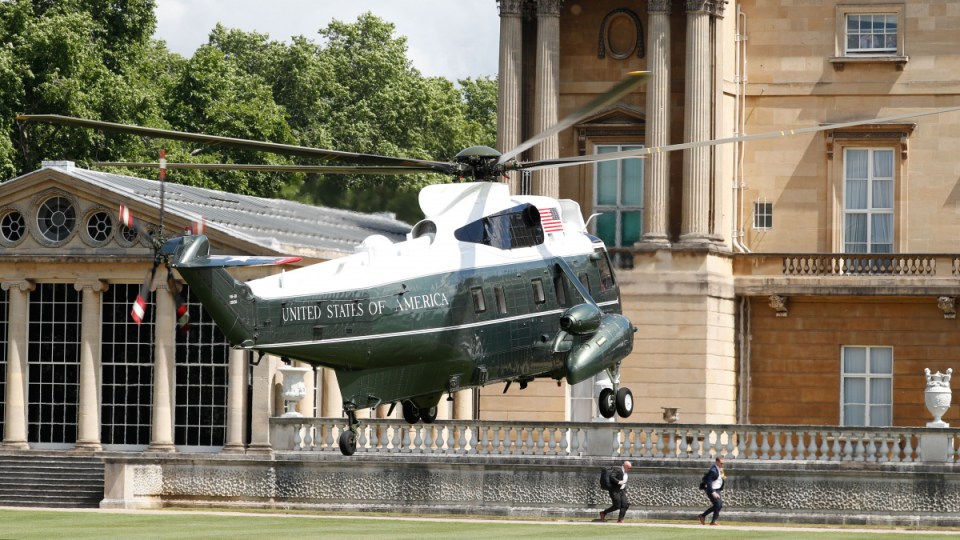 Marine One, with Donald and Melania Trump aboard, lands at Buckingham Palace. Photo: Getty

The Queen has apparently complained to Scott Morrison that US President Donald Trump ruined her lawn with his official helicopter on his state visit in June.

The American President insisted on flying into Buckingham Palace in Marine One twice in one day, leaving divots and scorch marks across the manicured swathe of green at the back of the Queen’s official London residence.

The day after Mr Trump’s palace visits, Mr Morrison also visited the monarch – who is said to have revealed her distress at the state of her grass.

“He had got off the plane and went straight to the palace to see the Queen, who led him out to the gardens and said: ‘Come and look at my lawn. It’s ruined’,” a source close to Mr Morrison told Britain’s Sunday Times.

Mr Morrison and Mr Trump were both in Britain for the D-Day commemorations in June.

Mr Trump and his wife Melania arrived at the palace in Marine One on June 3, at the start of their three-day state visit to Britain.

The couple flew in again on the short trip from the US Ambassador’s residence, Winfield House in Regent’s Park – where they were staying in London – for the state banquet on that night.

Both flights were accompanied by an official support helicopter.

The repeated trips reportedly left scorch marks on the palace lawn, caused by the helicopters’ engines. Divot marks were left by the wheels.

Mr Trump appeared oblivious to any damage or bad feeling, tweeting during his visit that the “London part of trip is going really well. The Queen and the entire royal family have been fantastic”.

The Prime Minister’s office has denied the story and Buckingham Palace has refused to comment. Leaders are not supposed to pass on private conversations with the Queen, though it regularly happens.