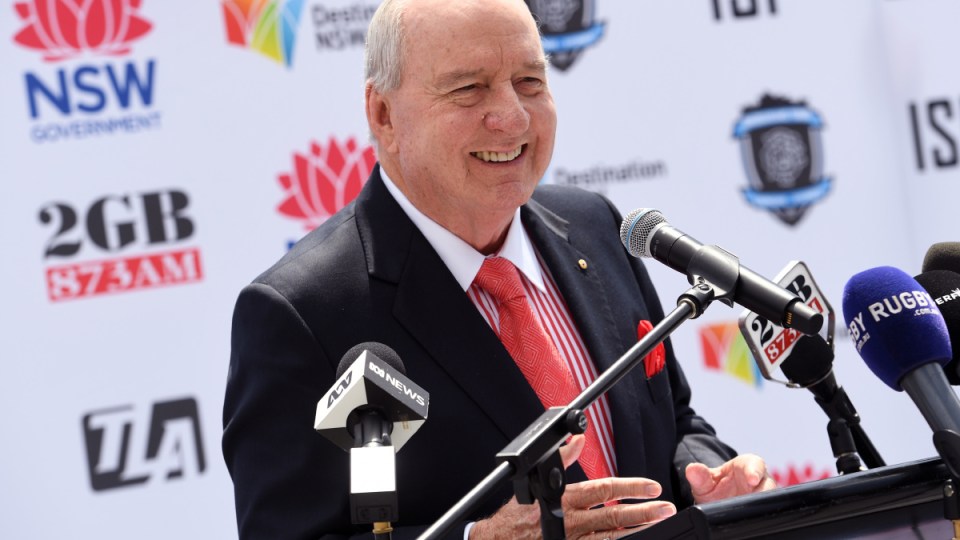 Jones says he has listened to the experts with regard to his health. Photo: Getty

New Zealand Prime Minister Jacinda Ardern has broken her silence on the ongoing Alan Jones controversy – with a cheeky dig in the ribs for the former Wallabies coach.

Ms Ardern has repeatedly refused to comment on the fracas, and did her best to avoid it again when she appeared on a New Zealand radio show on Tuesday morning. But in the end she couldn’t resist.

“I understand that he, of course, used to be closely linked to the Wallabies, so let’s just say I think that revenge is best served through a Bledisloe Cup,” she said.

New Zealand’s All Blacks trounced Australia 36-0 in Auckland on Saturday, extending their hold on the trans-Tasman Bledisloe Cup to a 17th year in a row.

Ms Ardern’s response comes as new audio emerged from the 2GB host’s astonishing tirade against her, when he urged Prime Minister Scott Morrison to “shove a sock down her throat”.

“Now, I hope Scott Morrison gets tough here with a few backhanders … hasn’t got a clue this woman.”

The clip was taken from Jones’ morning program on August 15, and was part of his original attack on Ms Ardern. It came to light after being aired on the ABC’s Media Watch on Monday night and was replayed on News Breakfast on Tuesday morning.

The further revelations came as advertisers continued to desert Jones. By Monday afternoon, 12 brands – including big names such as Volkswagen, Big W, Bunnings and Bing Lee – had pulled their ads from his show.

On Tuesday, they were reportedly joined by Yourtown Home Prizes and Geeks2You.

The social media campaign against 2GB’s advertisers has largely been driven by two groups – Sleeping Giants Oz and MadF—ingWitches.

Thanks @astaradara , Chemist Warehouse can confirm it has, as of Monday 19th August, withdrawn advertising on the Alan Jones Breakfast Show.

Jones’ initial attack on Ms Ardern began on August 15. He followed it up the next day, describing the New Zealand leader as a “hypocrite” in a repeated attack about her climate change stance off the back of the meeting of Pacific leaders in Fiji.

He initially slammed critics for “wilfully” misinterpreting him but apologised later on Friday night. Then Macquarie Media chief Russell Tate warned Jones he would be sacked if there was a repeat of such comments.

However, the broadcaster’s broadside has apparently been well received in at least one quarter:

@AlanJones said nothing wrong, Jacinda Ardern was rightfully put in her place! Only mistake Jones made was apologising to a fake outrage mob!

PM’s response was disappointing, should have supported free speech.

Aussies will punish companies that cave to keyboard warriors! -PH

The most recent controversy is certainly not the first time advertisers have boycotted 2GB over Jones’ offensive rants. But it seemed in the past the station was willing to weather the storm – and cover the associated legal costs that came with the inevitable defamation claims.

The list of controversies includes the 2012 on-air attack of then-PM Julia Gillard, when Jones told listeners she should be “put into a chaff bag and thrown into the sea’’.

He was later recorded at a Young Liberal function suggesting that Ms Gillard’s father, John had ‘‘died of shame’’ over his daughter’s ‘‘lies”.

In 2007, the Australian Communications and Media Authority found that, two years earlier, in the lead-up to the Cronulla riots, Jones was responsible for racial vilification and the broadcasting of material likely to encourage violence when he spoke about young Lebanese men at Sydney’s The Rocks.