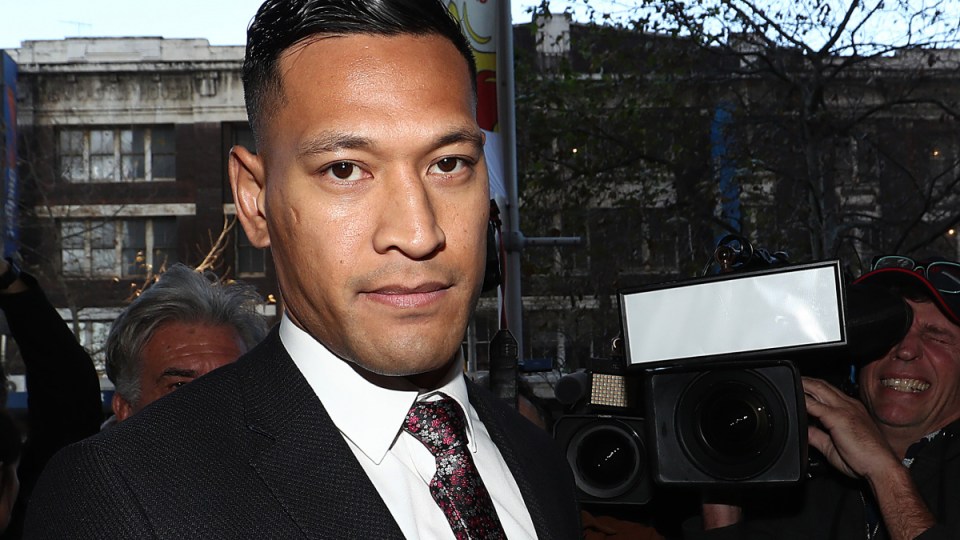 Israel Folau at an earlier Fair Work Commission hearing. He has another mediation date set for December 13. Photo: Getty

The dispute between sacked Wallaby Israel Folau and Rugby Australia  is heading for court after nearly four hours of talks on Friday ended without a deal.

Folau said he was disappointed no settlement could be reached at the conciliation hearing at the Fair Work Commission in Sydney.

“But I’d like to thank all those that have supported me throughout this time. I will continue to stand up for the freedoms of all Australians,” he said.

Folau had been hoping RA would apologise for terminating his multimillion dollar contract over a social media post in April, and acknowledge that his sacking was a mistake.

He is seeking $10 million in damages from RA, and wants his multimillion-dollar contract reinstated.

One of Folau’s lawyers said the lack of resolution was disappointing.

“It appears as though that unless things change, we’ll be heading to court,” he said outside the workplace umpire’s Sydney headquarters.

Earlier, Folau was swamped by media when he arrived at the workplace umpire’s offices for the talks – the first formal step in his unfair dismissal case against Rugby Australia.

Working through the media scrum, Folau shook hands and thanked a supporter, who said “God go with you brother … we’re praying for you”.

Asked what he wanted out of the closed conciliation hearing, the 30-year-old committed Christian said: “Hopefully an apology from Rugby Australia. That would be great.”

Folau was sacked after paraphrased a Bible passage saying “drunks, homosexuals, adulterers, liars, fornicators, thieves, atheists and idolaters” would go to hell unless they repented and posting it to his social media.

He argued he was unfairly dismissed on religious grounds.

Folau gave his first interview on Thursday night since RA tore up his multimillion-dollar contract after taking issue with the post in April, which was condemned as homophobic.

He claimed Rugby Australia had offered him money to remove the post, but declined because sharing the Bible was one of his duties as a Christian.

“I couldn’t do that … I couldn’t live with that,” Folau said.

“It certainly comes from a place of love and it’s nothing personal.”

But RA said Folau’s claim was “completely untrue” and it never offered him money to remove the posts.

In a video posted on his website before Friday’s meeting, Folau said he hoped RA would accept his termination was unlawful and reach an agreement about how to fix the “mistake”.

“First and foremost, I am hoping for an apology from Rugby Australia and an acknowledgement that even if they disagree with my views, that I should be free to peacefully express my religious beliefs without fear of retribution or exclusion,” he said.

More than 20,000 people have donated more than $2.2 million to help fund Folau’s legal battle via a campaign page set up by the Australian Christian Lobby.

The ACL effort replaced an earlier campaign on GoFundMe that was taken down by the platform for breaching its service guidelines.

“I want to thank you all for your prayers and your support. You have made it possible for me to stand up for every Australian of faith,” Folau said.

“I know we are strong enough to tolerate different views without firing people from their jobs for expressing religious beliefs that not everybody agrees with.”