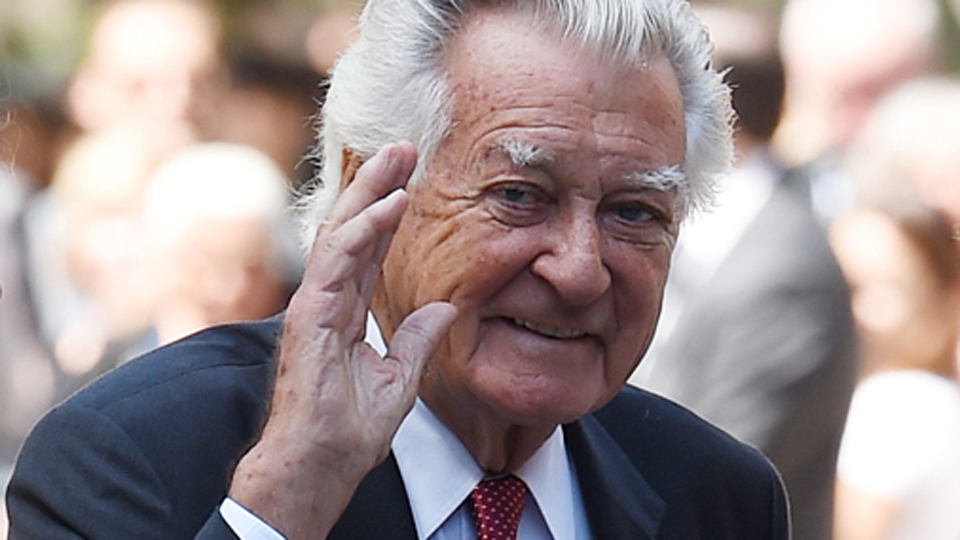 Thousands gathered inside the 2000-seat concert hall and outside on the steps of the Opera House at 11.30am on Friday to honour Mr Hawke, who died at his Sydney home on May 16, aged 89.

Mr Hawke’s wife, Blanche d’Alpuget sat in the front row alongside her late husband’s children and grandchildren, surrounded by dignitaries and the public before delivering the final tribute.

“This memorial service marks the transition from the grief of loss to the celebration of a life triumphantly well lived,” she told the applauding crowd, smiling and asking them at one stage, “Am I allowed to speak?”

“With today’s transformative service, we smile again, we glow with pride for the presence among us for almost 90 years of a great human being.”

He had already been farewelled at a private funeral, but free public tickets for Friday’s service were all snapped up within 25 minutes.

Former PM Julia Gillard delivered a message via video, saying “a million words could be written and a million more spoken about Bob Hawke, such is the breadth of his achievement”.

See a gallery of pictures from Bob Hawke’s memorial service

This was the last time I saw Bob Hawke. I am terribly sad to miss his memorial today. He inspired the Labor Party to govern well. He inspired the nation to embrace a better future. He inspired me as Prime Minister as I sought to live up to his example. He continues to inspire me. pic.twitter.com/Kh00Qs0nvo

While many had public memories of Mr Hawke, his son Stephen said he was simply “my dad”.

“It’s really not much more complicated than that – he was me old man,” he told ABC TV before the service.

“He wasn’t the perfect father, but he was very much a loving father and was loved in return by all of us.”

Mr Hawke’s grand-daughter Sophie  Pieters-Hawke also chose to reflect on his personal life, not his public persona as a union leader and prime minister.

“My fondest childhood memories are with my grandma and grandpa,” she told ABC TV as part of its national coverage of the service.

“I remember spending time in The Lodge and Kirribilli House. I remember, we would all get thrown in the bath together after rolling down the hill on Kirribilli lawns, the itchy buffalo grass.

“I remember sitting on my grandfather’s knee. I remember Whisky the cat.

Crowds gathering for Late Prime Minister Bob Hawke’s State Memorial Service on the steps of the Sydney Opera House. He’s being remembered as a political giant, economic reformer and man of the people @2GB873 pic.twitter.com/RFvF6MObJW

Mr Morrison said Mr Hawke was one of the “proud fathers of modern Australia”.

“I come to speak on behalf of a nation Bob Hawke loved and that deeply loved him in return,” he said.

“It was a passionate and affectionate relationship between Bob and the Australian people.”

Earlier, former Insiders host Barrie Cassidy told the ABC it was a “very sad day … but it’s also a day to celebrate” the life of Mr Hawke.

“Because I knew him well and admired him to a great extent, then obviously it’s a very sad day. But it’s also a day to celebrate,” he said.

“I think the fact that we are saying farewell to Bob here at Australia’s most iconic building is, undoubtedly, a tribute to him.

“He will be known as one of Australia’s most iconic people.”

Mr Albanese told the Nine Network that Mr Hawke transformed Australia’s economy and social policy through the creation of Medicare.

“There is no question he is Australia’s greatest ever environmental protector.”

He later told the service: “He was ambitious though not just for himself, he was ambitious for our nation. Bob was Labor to the core of his being, but his heart was too big to be contained by party lines.”

Dr Emerson earlier told ABC TV he hoped the memorial service was one of celebration and not “commiseration or sadness”.

“If there are tears, it will be tears of joy. It’s a joyous occasion,” he said.

Mr Hawke made the Guinness Book of Records for downing a yard glass while a Rhodes scholar at Oxford. In his later years, he indulged fans at the cricket by knocking back drinks.

But he gave up the drink in politics and proudly boasted he “didn’t touch a drop” while in Parliament.

The former ACTU leader rose through union and Labor ranks and won the party four elections, with first wife Hazel by his side.

In 1991 his treasurer Paul Keating replaced him as leader, his marriage hit the rocks, and eventually he and Hazel divorced.

He married Ms d’Alpuget, who was his biographer, in 1995.

“If there is a heaven, I’d like to think that they’ve now got a larrikin up there, still carousing, chatting up the angels, or puffing on a giant cigar, a beer in hand while reading the form guide … still campaigning, still winning and still getting things done,” Mr Rann wrote.