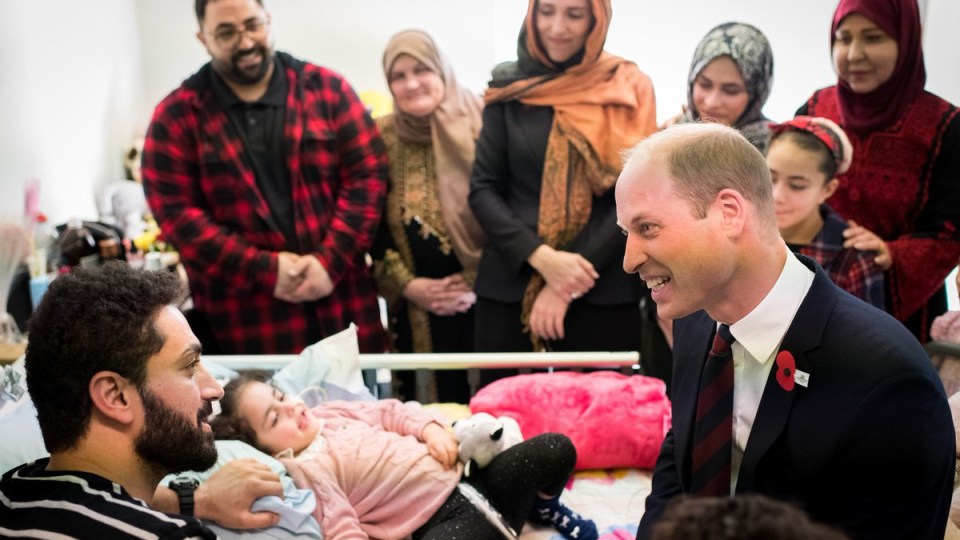 On the second day of a lightning NZ visit, William met Alen Alsati, 5, who was critically injured in the March 15 terror attacks. Photo: Twitter

Prince William has spoken of grief and defeating hate with love as he addressed Christchurch’s Muslim community in one of the city’s mosques.

“I do not believe grief changes who you are. Grief – if you let it – will reveal who you are,” the Duke of Cambridge on Thursday told those gathered at the Masjid Al Noor, where 42 of the March 15 attack’s victims were killed.

“In a moment of acute pain, you stood up and stood together.”

During the heartfelt speech on Thursday morning he called for extremism of all forms to be defeated and praised the compassionate approach the community, country and Prime Minister Jacinda Ardern had taken in the aftermath of the shootings.

“You showed the way we must respond to hate: with love,” he said.

Joined by Ms Ardern, William was welcomed to the mosque by Imam Gamel Fouda.

A pile of tributes and flowers that have been building up since the attack still adorn the mosque’s gates, while heavily-armed police stand guard and a crowd of a few dozen gather across the road.

The second day of the Duke of Cambridge’s sombre and low-key visit to New Zealand began with an appearance at Christchurch Hospital, where five of those injured in the attack that killed 50 are still in care.

Arriving by police motorcade and wearing a dark blue suit, the Prince was met with a cheer by a small crowd of onlookers gathered near the entrance.

He spoke briefly with senior doctors, nurses and hospital officials at the gate before heading in.

Police maintained a heavy presence outside, officers out in numbers and dogs sweeping the area.

It’s not the first stop William has made at a hospital since landing in the country.

Between public engagements on Thursday, he made a quite visit to a five-year-old girl in Auckland who was critically injured in the terrorist attack and recently woke from a coma.

Footage posted by Kensington Palace showed the Duke at the child’s bedside, answering questions about his own daughter, Charlotte.

The Duke of Cambridge meets five year old Alen Alsati, who is recovering in Starship Children’s Hospital in Auckland after being injured in the Christchurch mosques terrorist attack.

Alen woke from a coma earlier this week after suffering critical injuries in the attack. pic.twitter.com/XcNAsIw7xt

With New Zealand still on alert, security during the visit has been tight, with little of the fanfare that usually accompanies royal visits.

However, organisers have promised Christchurch residents a chance to meet William during a public walkabout on Friday afternoon.

He is also expected to lay a wreath at Christchurch’s earthquake memorial and talk with the city’s Muslim community.

The Duke’s first day in New Zealand began with a tribute to Australian and New Zealand soldiers at an Anzac Day service in Auckland, alongside Prime Minister Jacinda Ardern, who earlier greeted him with a hongi, a traditional Maori welcome that involves the pressing together of noses.

He also met police and ambulance staff in Christchurch, some of whom were the first on the scene after the shootings.

The Prince visited Christchurch following the deadly 2011 earthquake and last with wife Catherine, who hasn’t joined him this week, in 2014.