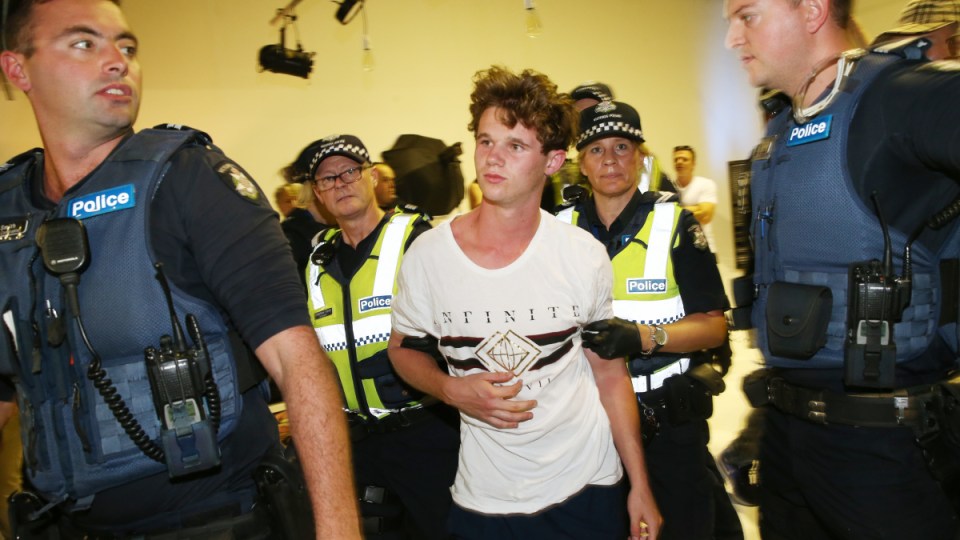 Will Connolly is arrested after egging Fraser Anning. Photo: AAP

The teenager who cracked an egg on Senator Fraser Anning’s head last month will not be charged – and nor will the senator.

Victoria Police confirmed on Tuesday that 17-year-old Will Connolly – who quickly earned the nickname Egg Boy – had received an official caution after the incident, which occurred at a rally in Melbourne.

Senator Anning, 69, has also avoided charges after striking the boy once he was egged.

“Investigators reviewed CCTV footage of the incident and both parties were interviewed,” police said in a statement.

“The 17-year-old Hampton boy has been issued with an official caution … A decision has been made not to charge the 69-year-old man. On assessment of all the circumstances, the 69-year-old’s actions were treated as self-defence as there was no reasonable prospect of conviction.”

Last week Senator Anning was censured in a bipartisan vote in the Senate for his comments.

Egg Boy’s lawyer Peter Gordon said on Tuesday the teen had been counselled by his parents as well as police about his behaviour, and he labelled the police resolution as common sense.

“It was the wrong way of going about what was a passionately-held belief and desire for a greater level of civility from our community and from our politicians,” Mr Gordon said.

“On the other hand, he acknowledges that it has brought a lot of happiness and relief to a lot of people and has brought together a lot of people who, like him, share a desire for a greater level of acceptance and decency and civility in our public and political discourse.”

But Mr Gordon said the teenager also regretted his actions and understood politicians had the right to express their views without being egged.

An online crowd-funding campaign to raise money for Egg Boy’s defence, in the event he was charged, quickly raised more than $100,000. The money will be donated to the Christchurch Foundation to support victims of the March terror attack.

Police said on Tuesday they were still hoping to identify a young man who kicked the teenager while he was pinned down by Senator Anning’s supporters following the egging in Moorabbin on March 16.

“While the 17-year-old boy was being held on the ground, another male has approached and kicked him in the body a number of times,” a police spokeswoman said.

Mr Gordon said Will Connolly had no involvement in the police decision to pursue that man.

Police released an image of the man they are seeking on Monday afternoon. Anyone with information is urged to contact Crime Stoppers on 1800 333 000.

No charges over ‘Egg Boy’-Anning scuffle